Blues off to flying start but Maroons take control late on 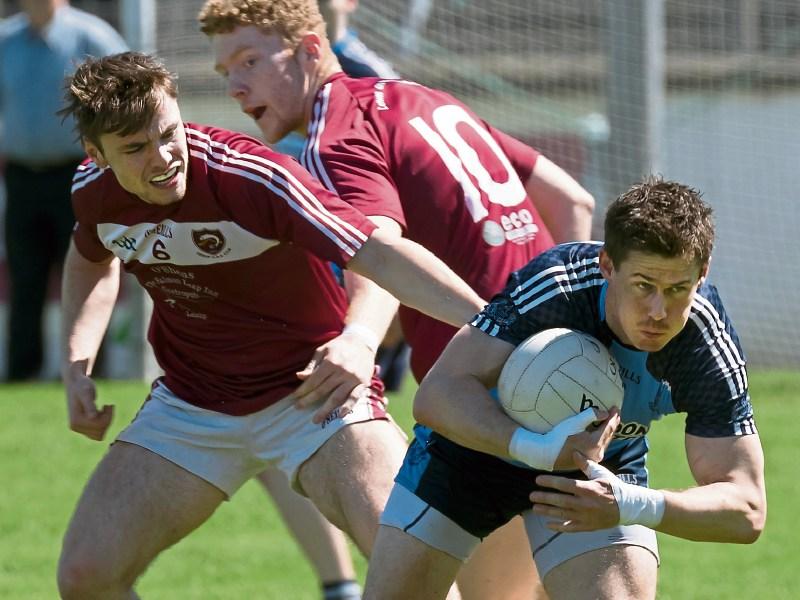 A strong second half display from Leixlip saw they defeat Eadestown in the Joe Mallon Renault Motors SFC, Round 1 (replay) in Manguard Plus COE, in Hawkfield last night (Wednesday May 9) on a final score line of Leixlip 2-20 Eadestown 3-5, and as a result Leixlip will now go into the group stages as a winner while Eadestown taking their place as a loser.

The result probably does not do real justice to Eadestown who lead at the start, were two points adrift at the break; re-took the lead early in the second half but eventually had no answer to Leixlip whose superior fitness and their ability to take points when the opportunities arose proved too much  for the Philie Wolfe managed Eadestown side.

The boys in blue got off to a great start, Emmet Bolton, operating at centre forward, opened with a point, quickly followed by a similar score from his brother Cian before wing back, Eoin Woods, sent one over the head of Leixlip keeper Kyle Costigan to nestle in the back of the net, all that and only four minutes on the clock and the score board reading Eadestown 1-2 Leixlip 0-0/

The maroon clad boys though soon awakened from their slumber with three quick points followed by a Padraig Mulrennan goal and points from Paddy Meagher and Ciaran Masterson to make it 1-5 to 1-2.

Eadestown hit back when a great run down the right wing saw Padraic Tuohy cut inside, pass to Emmet Bolton who made no mistake from close range. The Eadestown boys added another point before Leixlip hit back with points from Eamonn Murphy, Paddy Meagher and Tommy Moolick to see the half time score reading Leixlip 1-8 Eadestown 2-3.

On the resumption Eadestown again began impressively with Johnny Deane worming his way through after a poor clearance to find the net and a point from Emmet Bolton saw them lead 3-4 to 1-8.

Again Leixlip came back with a vengeance with Tommy Moolick converting a penalty after a foul on Ronan Fitzsimons. The same Fitzsimons hit three immaculate points, all from long range, as Leixlip too complete control hitting twelve unanswered points to win on a final score line of Leixlip 2-20 Eadestown 3-5.