Unlike The Dubs Lilies lack of a 'hit man' very costly

Dublin up the ante on the resumtpion 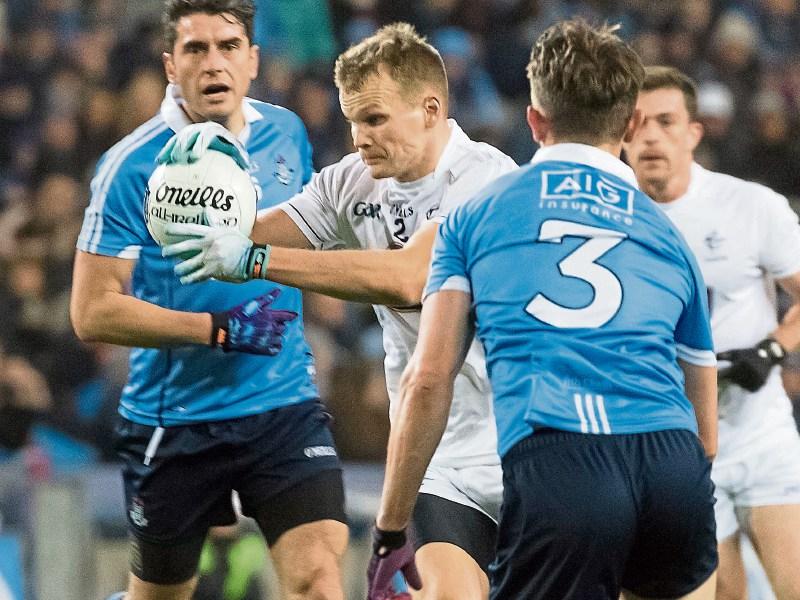 Peter Kelly bursts out of defence against Dublin

It was really hard to know exactly what to expect as we headed to Croker on Saturday afternoon; with everything being forecast from maybe, just maybe, a sneaky victory, to a heavy fifteen point defeat.

It was, after all, the All Ireland champions we were facing but the first thing you can put out of your head is the fact that Dublin had just regrouped something like two weeks since they captured their third All Ireland in a row

These boys don't switch off; they don't go off the rails and while they may not be meeting collectively they are in constant touch; always mindful of what lies ahead and plan accordingly. For this time of year their fitness was top notch.

Back in late November a few of the Dubs visited Newbridge and even brought 'Sam' with them.

John Courtney, the former Cork and Sarsfields star, not forgetting his  brief stint as manager of Kildare, organised the night.

Mr Courtney  now works with his idol 'Jim' assessing opposing counties' strengths and weaknesses on match days. He's doing it  a few seasons now for  'Jim' and by all accounts he is good at it; as no doubt he would confirm himself.

Affectionally known as simply 'Courtney' in these parts, although the Dublin boys refer to him (I am reliably informed) as 'Colonel' he organised a few of the lads to visit Johnston's  hostelry  in Newbridge, where a great night was had by all.

Three or four of the Dubs duly arrived, two had come from the gym; most of them were drinking water and I am reliably told that the alcohol that was consumed by the visitors would not have kept Catherine overly busy opening and shutting the till on the night.

That is the level footballers are at these days and while The Dubs may be just back from their sun holiday  where they mixed their relaxing time with a few training sessions and a few visits to the gym.

On Saturday night last they showed just how far in many respects  they are ahead of , not just Kildare, but the chasing pack and remember Dublin have only lost one league game, last season's final, since 2014. And incredibly that is the only time their star midfield man, John Fenton, was on a losing Dublin team since he came on to the senior panel back in 2015 having won an U21 All Ireland the year previously. He has now added three All Irelands and two All Star Awards to his collection. And is just 24 years of age.

That is what The Lilies were up against on Saturday evening last; the creme-de-la-creme of  inter-county teams and individual players.

It would be no harm if some of the naysayers, aka Kildare fans, could take that on board before being over critical of the boys in white!

Having said that Kildare did well in the opening half; retained possession; did not panic, opened up Dublin on a few occasions; managed one early goal; should have scored two more and would have if the ball had been kept 'ar on talamh'  when the opportunities arose rather than try and burst the rigging.

Lessons from last season's Leinster final have possibly not been fully taken on board yet.

Luke Flynn, making his debut, at this level, took his goal brilliantly; refusing to give up on a ball that looked to be going wide; he gathered before beating Cluxton at his near post.

Daniel Flynn, Kildare's best player by a country mile, scored a beauty at the death; he also had two golden opportunities in the opening half but blasted both over.

Flynn caused a lot of problems for the Dublin defence throughout; his direct running had them on the back foot on a fair few occasions; the only pity was that the Johnstownbridge, may not have got the support he needed while at the same time, on one occasion in particular, should have laid the ball off to his captain Eoin Doyle who had the  goal at his mercy.

In Brian Fenton Dublin had the complete footballer. Strong in the air, a good carrier of the ball,  great positional play, the Raheny man scored 1-3 and was simply outstanding.

However, while Fenton was getting all the plaudits his fellow mid fielder Michael Darragh Macauley, for me, did a lot of the donkey work; did the hard grafting; the heavy lifting.

It was Macauley who got in the 'big hits' in at vital times.

It was Macauley who effectively ended Kevin Feeley's role for Kildare; while the Ballyboden St Enda's man also came into contact with Daniel Flynn in that skirmish just before the break. (I often wondered what Bernard Dunne's role in the Dublin camp was).

In hindsight (always a great man) that skirmish was where Kildare's dominance ended.

Up to that point The Lilies were doing well, and while they should have been a lot more in front at the break than just two points, after the skirmish, the half time break was followed by Dublin running amock scoring 2-5 in fourteen minutes; before Kildare even raised a second half flag.

Every team needs a 'hit man' and by than I mean a player that is willing to give it out and take it; a man who is not afraid to mix it for the want of a better phrase.

Dublin are in the position that they not only have one, but at least three; all play big roles; all play vital roles and all vital to the cause.

Kildare have been missing such a player for a fair while now and, while not taking anything away from Dublin, that was where Kildare suffered big time on Saturday.

Opening with a game against the All Ireland champions was always going to be a big ask, now they have to lift themselves up and go again on Sunday, at home to Monaghan who  lost to Mayo by a single point last weekend.

Injuries could play a big part.

Knocks to Kevin Feeley, Eoin Doyle, Neil Flynn, amongst a few others, are a concern but hopefully they come through during the week.

It's helter skelter stuff  in Division 1, you must learn fast; grow up quickly and readjust to playing the top teams in the country over nine weeks.

The next couple of weekends should give us a better idea of exactly where we are.