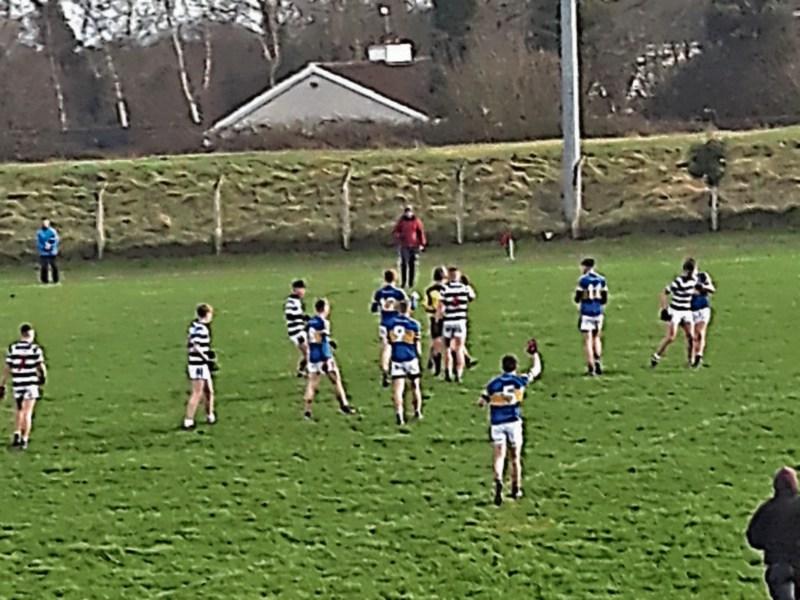 Naas CBS and Knockbeg in action

Naas CBS advanced to the semi final of the Leinster Schools Top Oil Bro. Bosco Cup (SF 'A' ) this afternoon, Friday January 19, with a fully merited six point over Knockbeg College, 2-12 to 1-9, at McCann Park, Portarlington.

The Carlow boys replied with midfielder Moloney bursting through from 40m before burying the ball in the back of David Morrissey's net; and two more points from Con Nolan and Curran opened a four point lead, 1-3 to 0-2 after some 12 minutes.

Naas responded quickly and impressively with Killian Thompson leading the charge. The Raheens man fired over an excellent point; quickly followed by another from Colm Joyce before Thompson got on the end of a long ball in from Joyce to outjump the Carlow keeper and punch to the net to take the lead by a point with 16 on the clock.

Knockbeg replied with two points before the break but it was Naas who finished the half strongest with points from Ian Blackburne and Darragh Kirwan giving the Naas lads the lead just on the break, 1-6 to 1-5.

Naas were now in a great position, leading by one and the wind on their backs and within two minutes extended that lead with a fine effort from Colm Joyce.

Knockbeg reduced the lead back to one but on 36 minutes Naas centre half forward, Tony O'Connor used his strength and pace to burst through the Knockbeg defence planting the ball in the back of the Carlow boys net.

Knockbeg did carve out a goal chance when David Ruth got inside the defence but Naas keeper David Morrissey was equal to the task.

Playing sensible, patient football with their half back line of Daly, Sargent and Stynes, being particularly impressive along with full back Conall Ó Gallachobhair, Killian Thompson increased the lead with a point and when Darragh Kirwan fired over an excellent left footed effort to make it 2-9 to 1-6 the game was all but done and dusted; Carlow's chances not being helped when their no. 6 was shown a straight red card soon afters.

Knockbeg College did reply with two frees from their ace marksman Nolan but Barry Keogh and Colm Joyce tacked on two to ensure Naas CBS would set up a semi final date on Saturday February 17 against the winner of Colaiste Eoin v St. Peter’s Wexford

A good display from Naas who apart from those mentioned had two other excellent players in Killian Thompson and Colm Joyce.