Sam all that was missing in Micko's golden reign in Kildare

A trip down memory land 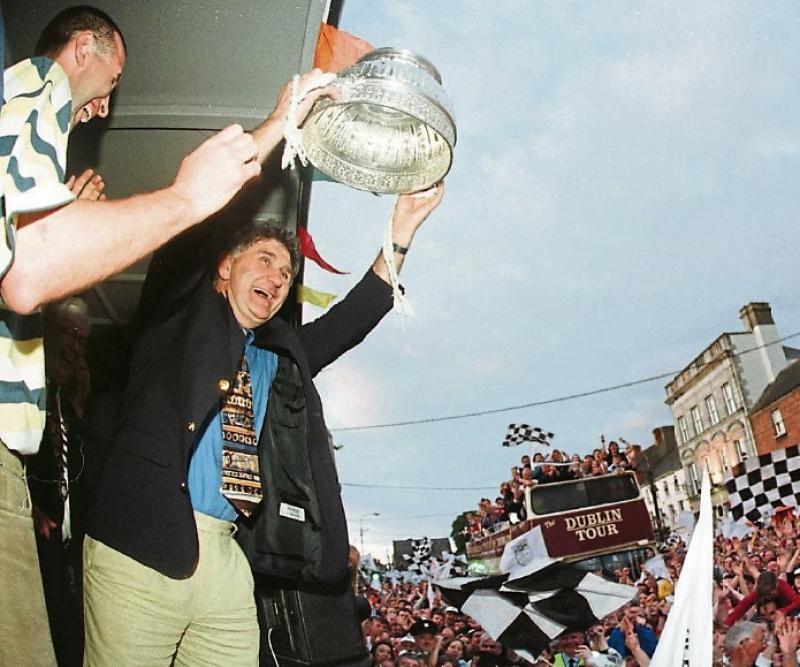 The words of a former Kildare player looking back on his time under Mick O'Dywer.

“And to just freshen things up,” our friend said, “we would turn around and run in the opposite direction.”

That's what Micko was known for.

Fitness. Stamina. Fitness and more stamina, but, of course,  much more besides.

His methods may be frowned upon these day but they certainly worked.

They worked for Kerry.

They worked for Kildare.

They worked for Laois.

They worked for any team that the great man was involved with  down the years.

And while, as one  would  expect, the vast majority of the documentary centred around  his Kerry days, let it be playing or managing, there was enough footage from his two stints with Kildare to remind us, as if we could ever forget, the impact he had when he threw in his lot with The Lilywhites.

From the day he walked into St Conleth's Park for the county senior football final of 1990 where he witnessed a cracking game that saw Naas defeat hot favourites Clane, to the day he bid a final farewell after defeat in 2002 Leinster final against Dublin, it was like a never ending merry-go-round; ups and downs; wins and losses; trials and tribulations.

It began in Micko's very first year when Kildare, although operating in Division 2 of the League, where they finished runners-up to Tyrone, but that qualified them for the League quarter final, going on to play Dublin in the final.

It took a fortunate, very fortunate,  Vinny Murphy first half goal, to deny Kildare what have been their first, and only,  league title.

But the ship was afloat and while a bigger shock arrived in the opening round of the Leinster Championship not too long after when The Lilies fell in the 'Battle of Drogheda', Louth sending Micko, the Kildare players and the big travelling contingent home with their tails between their legs.

And to compound matters at that time  there was no back door; no Qualifiers, one chance, win or get off the pot.

That was probably one of the greatest disappointments and set-backs during either of Micko's terms.

The following two seasons more glory but no silverware.

Leinster final appearances in '92 and '93, Dublin again proving that bit too strong on both occasions, while Dublin prevailed again, after a replay in 1994.

I can readily recall  heading into the Kildare dressing room after that defeat, Micko was on the way out, heading to the Dublin dressing room, as I understood it.

“I'll be back in a minute” he said instantly.

He did come back ... but it was all of two years later, as he headed for the dual carriageway, ending his first tenure with Kildare.

The late, great, Dermot Earley took charge in the following two years but with little success.

1997 and the Kerry maestro  was coaxed back to Lilywhite land.

And what a season.

In many respects this was the year many felt that Kildare not only should have won Leinster but even the All Ireland.

The three game saga  against Meath (and Jody Devine) the likes of which we will probably never see, or never experience again.

But still the tide was rising.

The fans were flocking to every corner of the country at that time.

They were welcomed from near and far.

Huge crowds, big spenders, well behaved, every county loved to have The Lilies as visitors.

On an away trip to Clare, needless to say an overnight job, a publican informed us that he took more over the counter that  Saturday night when Kildare were visitors than he took in the whole of a Fleadh Cheoil weekend.

Not sure if that says more about Kildare fans or the Fleadh Cheoil, but we'll leave that aside for the moment.

Bryan Murphy's goal in the Leinster  decider  will go down in history; the goal that finally saw Kildare crowned Leinster champions.

A meeting with Kerry followed  in the semi final, guided that year by the great Paudi Ó Sé was another day to remember as Kildare booked a place in the All Ireland final.

At this stage The Lilies had defeated the last three counties that had brought the Sam Maguire home, Dublin (still in this writer's opinion, the most satisfying win during Micko's reign) followed by Meath in the Leinster final  and then Kerry in the All Ireland semi final.

Only Galway stood in the way of Sam finally coming 'home' for the first time since his last stop over, and that was back in 1928.

The crowds  were simply incredible with players often taking close to half an hour to get in off the pitch after training as fans sought autographs, pictures, a hand shake, a clap on the back,  a chat or whatever.

It should, of course, have been dampened down, absolutely no doubt.

It wasn't of course  but it was bloody  marvellous when it lasted.

The county was awash with flags and banners; even the blackbirds turned white.

On the Saturday afternoon before the final, a light run-out at St Conleth's was full of rumours.

Captain Glenn had picked up an injury.

No official word, but the vibes were  worrying.

An extra prayer on Sunday morning was called for;  lads that had not been  spotted on bended knee for some time were in situ at early church gatherings.

The 'collection' that morning was reported as substantial as supporters  left no stone uncovered to get an edge; favours were sought, bought and paid for; anything that might help to get us over the line.

And what an occasion it turned out to be.

At half time, Kildare had their heads in front.

Heartbreak beyond belief but still, there was always next year. A mantra that has lasted now for an incredible ninety years;  a terrible statistic of Kildare football.

I remember talking to a fan after that final and he saying “if we can't win it with Micko we'll never win it.”

Keep the faith, I  replied, rather sheepishly I admit.

2000 and the Leinster Cup was back in Kildare only for the boys from Galway to again halt our gallop for ultimate honours.

Meath were victors in the 2001 Leinster semi final;  the following year, Micko's last, saw Kildare in  another provincial final  but The Dubs took home the Cup, again.

Under Micko Kildare gained just two Leinster titles but they gained respect, credibility, recognition. They dined at the top table, time and time again albeit without Sam.

There were other plusses. From Ollie Crinnigan being our only All Star back in 1978, suddenly under Micko  that number shot up to a dozen.

Players in white became household names, and not just in Kildare.

Some may say Micko's reign ended in failure.

Not me. In fact I would argue that what Mick O'Dwyer achieved with Kildare could be judged alongside anything, and everything he achieved in his native county of Kerry, and further afield.

Have no doubt Micko  was one of the greatest, if not thee greatest, players and managers ever in the history of the GAA and how fortunate we in Kildare  were to have  him for a decade.

Thanks Micko for some wonderful, wonderful  years.