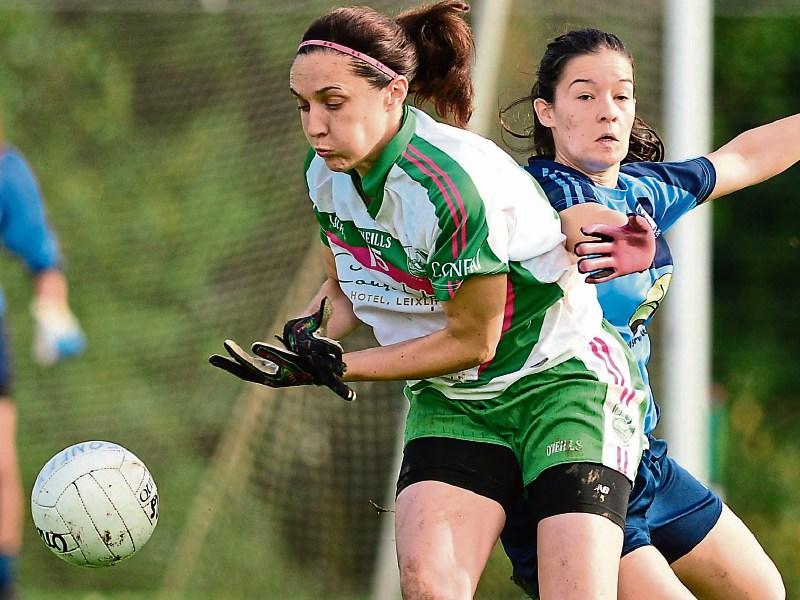 Deirdre Gately in action in the semi final against St Anne's

Confey Ladies are on the verge of making history on Sunday (October 29) when they line out against Foxrock Cabinteely in the Leinster Ladies Senior Club Football final at Coralstown, Kinnegad in a game that throws in at 2 pm.

Confey will be attempting to do what no other Kildare Club has managed, take home the Bill Daly Cup and indeed reaching the final makes them only the second club from Kildare to make it through to the final. St Laurence's being the first, just last season.

Confey's task though, on paper at least, looks immense, as their opponents, Foxrock Cabineteely will be attempting to make it three senior titles in a row.

Last year the Dublin team defeated St Laurence's comfortably, 5-10 to 1-3, while the previous season they were too strong for Sarsfields of Laois, winning 1-12 to 1-7.

Foxrock Cabinteely defeated Oldcastle (Meath) in the semi final, winning 4-5 to 0-5, in an impressive display.

Confey, on the other hand, really turned on the style in their semi with an impressive display of attacking football proving too strong for St Anne's of Wexford winning 5-14 to 0-11.

So it was indeed goals galore with the Gately girls leading the way, Áine and Deirdre sharing the five between them.

In fact Áine hit a very impressive 2-7 with Deirdre adding 3-1, in an overall display that sees them go into Sunday's decider with their confidence sky high.

Confey opened in style against St Anne's creating five goal chances in the opening five minutes and while not all were converted nevertheless by half time the game was all but done and dusted leading 4-6 to 0-8.

St Anne's did come more into the game in the second half but a schrewd move that saw full forward Racheal Divilly move out to the middle, breaking the Wexford's grip in that area, and with three quick  Áine Gately points, there was only going to be one result with Confey clinching their final spot in an overall very impressive display, on a final score line of Confey 5-14 St Anne's 0-1.