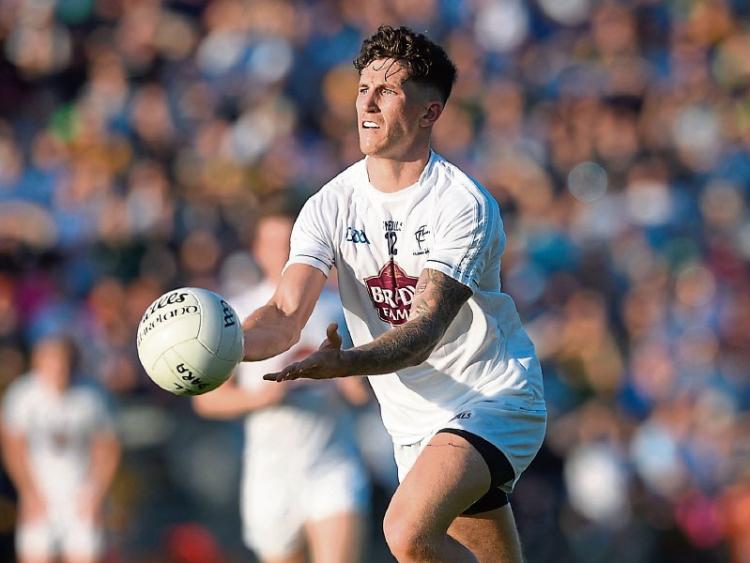 Confey’s David Slattery has certainly made a name for himself in 2017.

Slattery made his 2017 championship debut for the Lilywhite county in the Leinster SFC quarter-final against Laois back in June, going from strength to strength with each game after.

After finding himself unemployed from the construction industry during the recession, Slattery decided to take on a whole new career change.

“When I left School, I was a carpenter as I loved construction studies. I did that for over a year. During the recession, with the Construction Industry going into severe problems and the crash of the Celtic tiger, I found myself out of carpentry and out of work.

“I sat down with my Mam and Dad, where we discovered my passion. We discovered that being healthy, fit and active along with GAA was evidently my route.

“I decided there and then that it was back to college for me where I completed my ordinary and honours degree and 7 years later here I am”, said David.

Slattery had a good run in the Allianz Football League this year, with two cracking goals against Down and a promotion back to Division 1 for the lilies.

Slattery has made a big impression with Cian O’Neill’s men this year, and said GAA has been a huge part of his life growing up.

“For years growing up, I played both Hurling and Gaelic Football in primary school all the way up through secondary school. Upon completing my Leaving Certificate, I then went on to concentrate on hurling and played with the County U21 Set up where we won the Leinster B campaign.

“I then decided to Take football more seriously when Ronan Quinn took over as Senior football manager within my club.”

The speedy forward was called onto the county panel in 2016, after a setback in 2014.

He said he was given opportunity he “craved as a player for many years” and hasn’t looked back since.

“In 2014, I was called into the County set up for pre-season trials under Jason Ryan. I quickly found my feet. I played some trial games in October 2014 and was brought into the senior set up in December of that year.

“The O’Byrne Cup came along in January where I featured very little to find myself training with no game time. Along came the League, where I was then released from the panel. I knew I needed to work harder and focus on how I could improve as an individual going forward.

"Some say you need to take a step back to move forward, and I'm a firm believer that I did that very thing that year."

As a fitness instructor by trade, David knows the importance of strength and conditioning in sport.

“GAA has always been a tough, competitive sport, and I do believe that training has always been extremely tough in both Hurling and Football however, the science behind it has changed and although the GAA demands are high both mentally and physically, I firmly believe that the training itself is more sport specific and is carried out in a more intelligent fashion.

“The focus on physical fitness has remained at a high level but the coaching infrastructure within the GAA has improved and is continuing to do so.

I asked David whether he thinks training and fitness in the GAA has become excessive.

“Although, GAA does seem excessive nowadays, I believe the improvement in the coaching within the GAA has brought the athletic development to a new height. I believe the level of fitness required has improved as a result of improved coaching, nutrition, GPS awareness, daily player monitoring, backroom teams, sponsors etc.”

The future is bright for Slattery – watch this space!