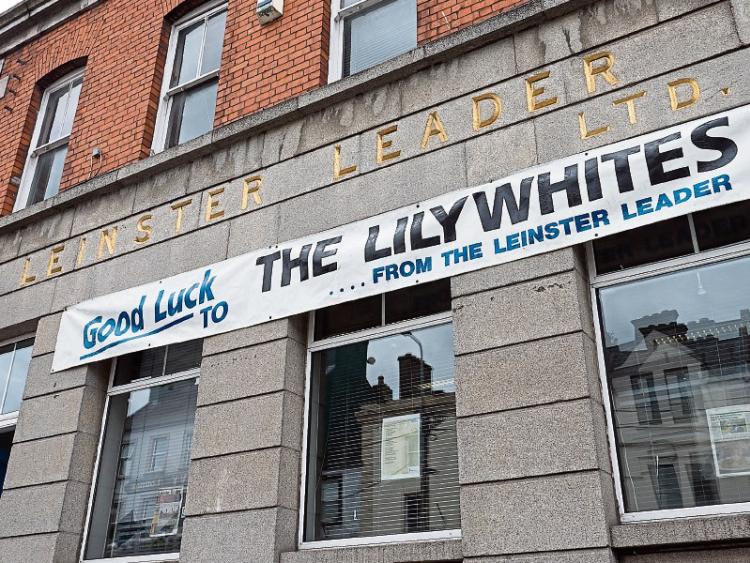 The Lilywhites banner went up on the front of the Leinster Leader building last week. Photo: T Keane

It has been seven long years since Kildare last lined out in a Leinster senior football decider, all the way back to 2009 when Dublin won by three points.

It was back in the year of the millennium, after a replay against Dublin (2-11 to 0-12) that Kildare regained the title they had won two years previously, having finally breached a gap that had lasted all the way back to 1956.

So no matter how one looks at it, Kildare reaching a Leinster SFC final is far from a regular occurrence.

For those not old enough to remember back to '98, when The Lilies last reached an All Ireland final, the entire county was a sea of white and while Sam decided to head West that day in September, rather than take the short trip down the dual carriageway, nevertheless, the occasion was marked with flags practically on every street corner.

Now, with Kildare head-ing back to Croker again surely the time is right for every town and village, to show its appreciation, and more importantly, its support for this young progressing Kildare side led by Naas man, Eoin Doyle.

So this week we are calling on all shops, businesses, the local authorities and households from Kilcock to Castledermot, from Monasterevin to Ballymore Eustace to fly the flag for our footballers.

Let's paint the entire county a sea of white, every lamp post, every building, anything that doesn't move slap something white on it.

Now is the time.

Let's be havin' you.

Together we can succeed!