Did the neighbours know their fate long before Sunday?

Latest battle between Kildare and Laois 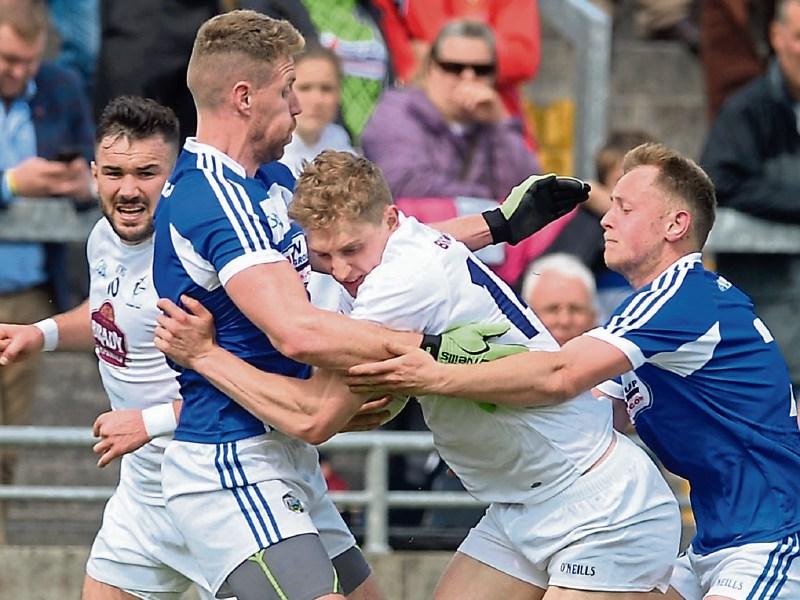 Daniel Flynn of Kildare tries to get past Denis Booth of Laois in the Leinster football championship games at O Connor Park, Tullamore.

There is something about the opening round (for Kildare that is) of the championship that, initially at any rate, makes one a bit nervy, even somewhat tetchy.

It probably comes from experience down the years. Drogheda, Pairc Tailteann, St Conleth's Park,  and Croke Park, have all hosted Kildare at various times that saw The Lilies coming out a lot quicker to their cars than they went in.

Hardly any need to go through the games, real genuine supporters will know exactly what I mean.

Playing Laois, regardless of how either had faired earlier in the league in any season, has had  a tendency to cause a sleepless night or two  prior to a championship meeting.

On Friday evening last though there was an 'Up for the Match' gathering in a well know hostelry in Portlaoise. Yours truly was invited to make a contribution about past encounters and maybe tell a tale or two of previous happenings.

Needing a bit of back-up two well know Lilies, aka Screw O'Rourke and Camillus Walsh , the latter not unfamiliar with Portlaoise surroundings for various and varied reasons,  travelled as  'minders' on the night.

We arrive at the appointed time, my colleagues proceeded to get some beverages as I make final preparations for the chat.

The organisers and a few more 'guests' arrive but the home support is light on the ground.

To be truthful being light on the ground is probably not the correct turn of  phrase, you see in fact they failed to arrive, full stop.

The gig was cancelled and I immediately thought to myself, this can only mean one or  two things.

(1) The Laois boys are getting cocky and so, afraid they might give something away, decide not to appear.

Or (2) they fear the worst having been relegated to the basement of the league for the season of 2018 the last thing they want to witness  is Kildare driving a nail into their 2017 Leinster campaign.

Within a minute of throw-in option 1 was firmly on the table.

Referee Coldrick got proceedings under way and before you could say 'we're up and running' Donal Kingston waltzed by a few defenders planting the ball in the back of Mark Donnellan's net.

Holy God I say to myself, we go eight games in Division 2 conceding just three goals and now inside 54 seconds the neighbours (including the Laois press men present) are up on their feckin' high horses.

I remain, as usual, cool, calm and collected and while the inside of the stomach suddenly feels as rough as if  I had gone into double  figures at the counter the previous night (which of course I didn't) being the true professional I remain steadfast.

Slowly the boys in white begin to knock over a few points and by the time the clock hit seven minutes the sides were level, the stomach was improving and the noisy neighbours were, shall we say, not as noisy as they were after 54 seconds.

I spotted the great Joe McTeague, just down from the press box,  wiping the sweat from  his forehead; even though his back was facing me I could  see the relief on The Larks  man's  face!

Daniel Flynn was beginning to show his pace running  through the Laois defence but unfortunately a punched effort was thwarted by a pull on his hand but being on the blind side of the match official no free awarded.

Twenty-three minutes on the clock and Alan Farrell had the sides level but Kildare were tackling like their lives depended on it and were  turning over Laois time and time again.

Omens are good (I whisper to myself).

Ollie Lyons fires The Whites in front followed by two from Daniel Flynn as Laois keeper, Graham Brody decided he would go walk-abouts  and arrives into the middle of the field with the ball still on his toe.

The mind suddenly takes a ramble.

Is this Christy Byrne in disguise I say to myself. It was a trait the former great did regularly much to Micko's frustration, and annoyance, I hasten to add.

Fergal Conway looked out on his feet, having put in a big shift as the break arrived The Lilies seven clear.

On the resumption Kevin Feely leaves Alan Farrell in a hape  (legitimately); Daniel Flynn does a summersault the likes you wouldn't see in Duffy's Circus, sets up Niall Kelly for a point before David Slattery finds  Flynn, who stays cool before ending  the game as a contest. Flynn of course was very fresh, this being his first championship game since 2013.

Still only the first game but now a date with The Royals beckon, and in Tulla-more again; it should be a cracking contest with a great atmosphere.

As for Laois, maybe the boys who failed to show on Friday  night knew their fate.

Pity they didn't tell us.

Would have slept a lot better on Saturday night  ... but not as good a sleep as we got on Sunday night!

Fógra:  Exiting, two  'men of the cloth' overheard enquiring about the next game. When informed it was Saturday week in Tullamore, both instantly remarked, better get a sub for Mass that evening. With PPs Fr. John Fitzpatrick (Carbury) and Fr. Jimmy Doyle (Cooleragh) in the Kildare camp (along with their boss hopefully) who knows where this journey might take us!