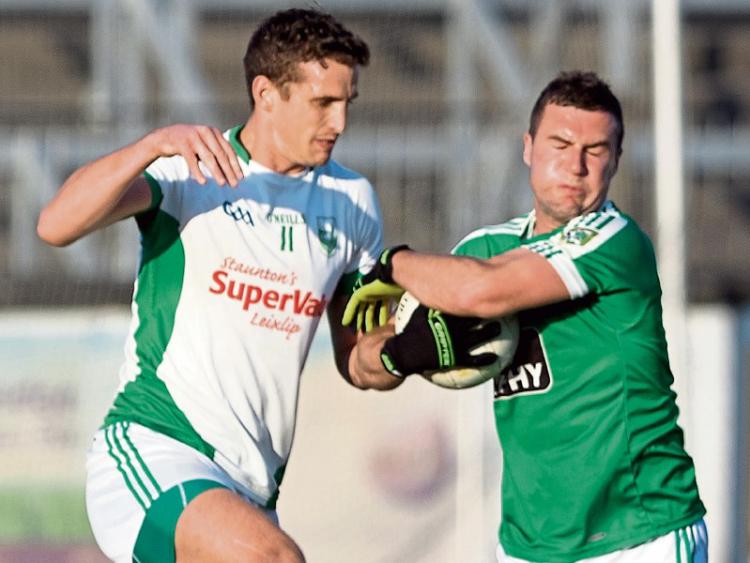 Having equalised with a late free in last Sunday’s drawn Joe Mallon Renault SFC Round 1 game, Moorefield made no slip up at the second time of asking defeating Confey by all of eleven points (1-16 to 1-5) at St Conleth’s Park last evening (Wednesday May 10).

It was obvious from the word go that The Moores were up for the challenge having found Confey a difficult side to break down a few days earlier. This time it was the Newbridge side that dominated from the word go but still Confey were only three in arrears at the break (1-3 to 0-3), the Moorefield goal, a contender for the goal of the season, with Eddie Heavey’s pin-point kick pass finding Adam Tyrrell who blasted to the net.

Tyrrell picked up a black card soon after when halting David Slattery as he headed goalwards and with David Whyte forced off (just back after a shoulder injury) picking up a similar type injury, it was still all to play for in the second half.

Confey opened with a bang on the resumption with Conor Daly firing past Tom Kinsella after 40 seconds, the Moorefield keeper having made a brilliant save from James Gately but the ball fell to Daly who made no mistake to level it up.

In the build up to that goal Hugh Lynch pulled his hamstring while dangerman Gately also picked up an injury as he fired to the net, both were forced off.

Moorefield then hit eight points on the trot to kill off the Confey challenge going on to win on a final score line of Moorefield 1-16 Confey 1-5.