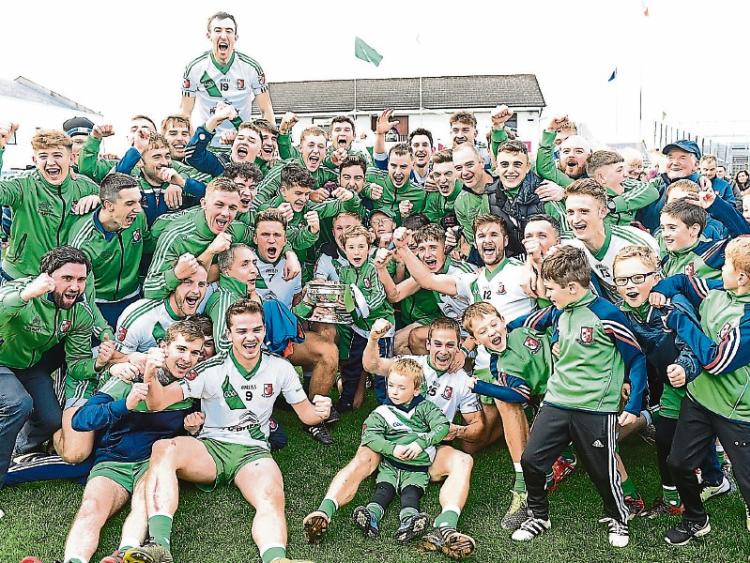 Of course all the talk revolves around the current senior county champions, Sarsfields, as they bid to try and compete three-in-a-row titles; something they last did back in '50, '51 and '52.

POLL: Who will claim the Kildare Senior Football Championship title for 2017?

However Roseberry, a club side from Newbridge, that later grew into Sarsfields have the greatest winning run in the history of Kildare football, when they captured the senior championship on no less than seven consecutive seasons (1903 to 1910) a feat that will no doubt highly unlikely ever to be surpasses.

For now though it is the 2017 championship and if the bookies are proved correct then John Crofton’s side are all but done and dusted.

Installed at one of the hottest favourites for some time they are quoted at 15/8 to completed the hat-trick of wins.

No one likes the tag of favourites but if anyone can carry that mantle it could be Sarsfields. A young, talented side with an abundance of quality players. Indeed it would be a wise soul who could actually predict the starting XV when they open their campaign on Saturday May 6 taking on Maynooth in St Conleth's Park a game that throws in at 7 pm.

Maynooth will be the opposition for this opener, a repeat of the last season’s Round 2 clash when they (Sarsfields) were given a bit of a fright by a side led by one of the Newbridge side’s favourite sons, Paul Doyle.

The Doyler will once again lead Maynooth this term and while they will be going into this one as rank outsiders again, they have some top quality footballers at their disposal including county players Neil Flynn, along with no. 1 custodian Mark Donnellan.

Ben McCormack will miss this one, although he is said to making good progress following a foot injury picked up against Galway in the AFL Division 2 decider.

Sarsfields, of course, are operating in Division 1 of the SFL while Maynooth are going great guns in Division 2. No doubt Maynooth will give it their all and will pose some problems but it is difficult to see anything but a win for the county champions.

Second favourites to take his season’s title are Athy, hardly a surprise with their county players, Kevin Feely, Niall Kelly, the Hyland lads along with a host of top class players.

They are in action on Saturday May 6 at St Conleth’s Park and will take on local rivals Castledermot.

Castledermot, are one of those sides, especially when playing at home, are a very difficult side to defeat. These met only a few weeks ago in the SFL and ended up sharing the points. The fact that the game is at St Conleth’s Park, is more advantageous to the boys in red and are given a firm nod to book a place in the Rd 2 winners’ group.

Last season’s beaten finalists, Moorefield take on Confey in their opening round; in a game that, on paper at least, looks to be one of the most competitive of the opening eight games.

Confey, winners of the Leinster SFL Division 1 last season, are one of the coming teams and while their league form to date has been somewhat mixed, nevertheless they are a team to be reckoned with having reached the last four in 2016, going out to eventual winners Sarsfields.

David Slattery is their county representative and who will forget his two goal salvo against Down earlier this season. But Confey are far from a one man side they have a host of decent players including Hugh Lynch, Conor Daly, Paul Divilly and Ciaran Lyons to name just a few.

The Moores have seen a big turn around of players this season and some of the younger lads that have been given an opportunity have certainly not disappointed.

They have in Eddie Heavy and Liam Healy members of the county squad; Adam Tyrrell, Kevin Murnaghan; the O'Connor boys, an expert free taker in Mark Murray; Daryl Flynn and a host of promising youger lads.

Expect a close one here; and don’t even rule out a replay, but at the end of the day the vote goes to Moorefield.

Celbridge, under manager Trevor O’Sullivan, are a side that have been threatening of late and the news that Paddy Brophy is on his way home from Down Under is a tremendous boost.

Their opponents for their opening game on Saturday May 6 are last season’s intermediate champions Round Towers.

The Towers, operating in Division 2 of the SFL have not been setting the place alight but come championship time, Glenn Ryan will have his side well primed but there is no doubt that stepping up from intermediate to senior championship, is a major step up in grade.

Celbridge had an excellent run in 2016 as their opening win over Athy testifies to while it took two games to get over Naas, they then gave Carbury a bit of a hiding (3-22 to 1-11) before finding their bogey team, Moorefield proving too much for them on the day.

With players of the calibre of Mick O’Grady, Ollie Lyons, last year’s player of the year Fergal Conway; Shane McNamara along with a few other very experienced players, Celbridge look to have too much power for Round Towers.

Johnstownbridge, on paper at least, look to be one hell of a strong side, especially when one takes into consideration their county representatives.

Any team that can boast of county players Paul and Keith Cribbin, Daniel Flynn and Cathal McNally have to be a serious outfit and when you add in Sean Hurley and Luke Flynn it is surely only a matter of time before they make the big breakthrough; something of course we have been saying for a few season now.

They are in action against local rivals Carbury on Sunday May 7 in Newbridge at 7 and this has potentially to be one hell of a game.

Carbury with the O’Flaherty boys now concentrating on club football, remain one serious outfit, and with Eoghan expected to be back from injury is a great boost to them.

Eoghan has been out of action since his side captured the Aldridge Cup but returned to action last week in the league.

Still I'm sticking with Johnstownbridge but as ever, they come with a warning notice.

St Laurence’s take on Clane on Sunday April 14, the only SFC game on the second weekend of action, and this one goes ahead at St Conleth’s Park at7 pm.

St Laurence’s, operating in Division 1 will be firm favourites against a Clane side (Division 2 of the SFL) who have been going through a bad patch in recent times.

The Larries, not the force they were a few years back but still have some fine players and a win over Sarsfields, in which they scored five goals in the league should have given them a lot of confidence.

Clane are doing reasonably well in the top third of Division 2, are a young side who took a couple of drubbings in the championship of 2016.

The Larries went out of last season’s championship in Round 3 at the expense of Athy.

Naas and Eadestown, a local derby of course will go head-to-head on Sunday May 7 at Hawkfield (2 pm) and no matter what way you look at this one there is only one result that can be seen.

Naas, under a new management team this term, had a decent 2016 campaign making it to the quarter final before bowing out to Confey. Operating in Division 1 the boys from the county team have had mixed results but are playing better than the results look at first glance.

Eadestown have tumbled in recent years and now find themselves operating in Division 3 and while in mid-table it is difficult to see them mak-ing any headway in the SFC, even with the returned Emmet Bolton to their ranks.