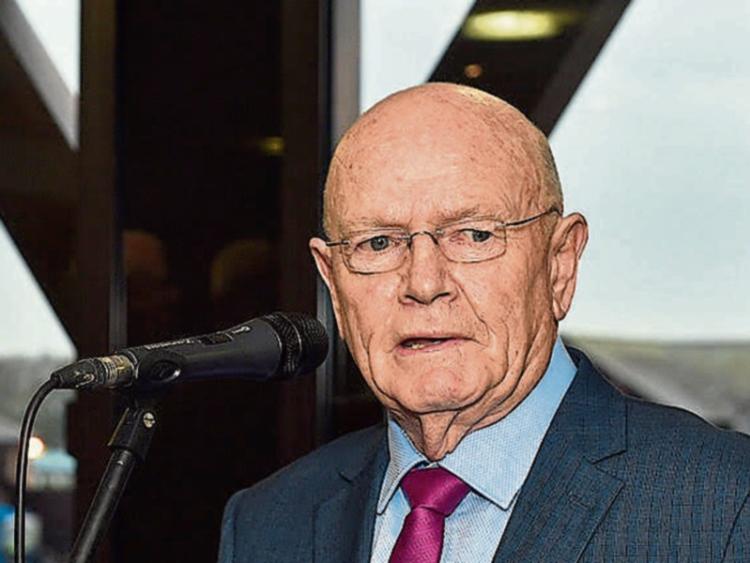 Cast your mind back to 2002, the year the euro currency made its first appearance, and much more.

It was the year Fianna Fáil and PDs were re-elected to government; Geraldine Kennedy became the  first female editor of the Irish Times; while on the sporting front Kilkenny and  Armagh were crowned All Ireland champions and Ireland shone at the World Cup in South Koria and Japan.

It was also the year  John B Keane departed this world.

And speaking of Kerry men it was also the year that John B's Kerry compatriot,   Dick O’Sullivan, was appointed General Manager of Punchestown.

“Initially it was for a six month period” Dick reminded us at our annual pre-Festival gathering, in the company of Shone Dreaper, PR and Marketing Executive at the course, and here we are some fifteen years later, and the same Dick is sitting in the same chair, in the same office and  looking as sprightly as ever.

It was Denis Brosnan, Kerry Group founder and at the time Chairman of Horse Racing Ireland who asked Dick “to go up to Kildare and sort out Punchestown,  six months should do the trick.”

Don’t think Dick had everything sorted in six months but regardless he (eventually) got everything, and more importantly everyone, back on track and today the Punchestown Festival is without question Ireland’s premier racing festival, bar none.

Prize money this year sees another big increase; 12 Grade 1 races and total money on offer of just under €3 million.

When one considers that outside of the public restaurants, no less than 17,000 people will be catered for, meal-wise, at the five day festival that gives an idea of just how much Punchestown has grown and grown over the last number of years.

It has grown to such an extent that after last year’s festival it was decided to take another serious look at how they were catering for the massive attendances.

Dick explains: “we got in a few experts in this (cater-ing) area to advise us and they were absolutely dumbfounded that three people, headed up by Janet Creighton,  could attempt to put on that (catering) show; sell it, manage it, deal with complaints, watch the food service; and much more;  so we have a new structure in place this year and have divided the catering up into three separate companies.”

Shona elaborates: “There is not a company in Ireland that can cater for 17,000 one day after the next in a structure like we have at Punches-town so we decided to split it up and I have to say we split it out to Kildare based people.

“In our new La Touche Restaurant we have Fergal Nugent from Bouchon (high class restaurant over Kavanagh’s in Naas); he has trained in The K Club; in Adare Manor and The Savoy in London.

“In the public food catering area in the new Loft, Archive, Open Gate, Double Bank and Sports Bars; in the grandstand  Restaurants we have Natalie Collins, formerly of the National Stud and Newbridge Silverware.

Natalie is daughter of the late top class flat trainer Con Collins and sister of trainer Tracey; while  and the third company to come on board  is John Coughlan Catering and he will be looking after the major pavilion areas and the private suites.

“We were very conscious to keep it Kildare based and very happy and confident that that end of the Festival will be very well served.”

Of course this year patrons will see massive changes as Phase 1 of the Punches-town re-development has been completed on time, on schedule and on budget at a cost of €1.5m.

Everything from the basics such as a new toilet blocks; extra seating; in the grandstand we have six refurbished bars, all different identities, all different zones“, so if you are here and a friend rings enquiring where you are you can instantly say I’ll miss you in such and such a bar, ”enthuses Shona.

“Up to now it was just one big bar, now we have The Loft Bar; The Archive Bar, The Sports Bar; we have revamped cafes; revamped food hall, all because we went people to come and say,  ‘we went into one of the bars, it was lovely, we had a great day, would really recommend it,’ we would hope and would be confident that when the Festival 2017 is over people will say ‘Punchestown have really upped their game’.”

The overall funding for the entire re-development is some €6m but when you start to spend in a place as big as this and take into consideration what needed to be done, we think we have done a good job and spent wisely.

“Remember” Dick reminds us “we don’t have the kind of money Cheltenham, or Leopardstown or the Curragh have so we  choose our battles, decide where best to spend  and are happy to date on what we have achieved.”

We are excited insists Dick, with a broad grin of contentment on his feasóg, adding “corporates are great as are our sponsors which help us to keep going but if you don’t get the locals through the gates, and as I have been preaching for a long time now, you are not really catering for the life and soul of the real public; but we are excited and very happy with the way we have used our budget and hopefully the general public will see it that way also.”

No matter what is spoken about these days one word always creeps into the discussion: Brexit.

Will Brexit affect Pun-chestown in 2017 and beyond?

“It doesn’t look to be affecting us at the moment” insists the General Manager,  “I’m sure it will sometime but look, if our friends across the water want to come they will come, they have been coming for years and will be here in big numbers again in a few weeks time.”

Cost is always on top of people’s agenda but when you consider that to go to Punchestown is one third of the price than  to go to Cheltenham to basically see the same quality horses; same jockeys; same trainers; same prize money, punters are still getting excellent value taking everything into consideration  and while so far it (Brexit) has not come up a lot we will be keeping an eye on that and the effects, if any, it may  have in the future.

Year on year Dick O’Sullivan sings the praises of his small but dedicated staff, or as he likes to call them “the team” and 2017 is no exception in that regard.

“Whether I’m here or not doesn’t matter a damn” insists the Kerry native, “this is a well oiled team they have all jobs to do; all muck in together; the temporary people all develop and gain from the experience they learn when here, in fact I would go as far as to say they are lucky to work with the team here and  learn and become part of the organisation, that is how it works here and that is how it always worked here.

“There is a  drive and an energy here, no time for bitching, no time for job descriptions; everyone’s opinions are taken on board; all in a relaxed atmosphere; you could go into the kitchen and meet anyone from an intern to someone sponsoring a race for a few hundred grand; that’s the kind of place it is and that is what is unique about Punchestown and that is why it is what it is” added the GM who can’t wait for the action begin on Tues-day ending with probably  the biggest attendance of the week, Family Day Saturday April 29.