Chuck is gone but Lilies beginning to Rock 'n' Roll 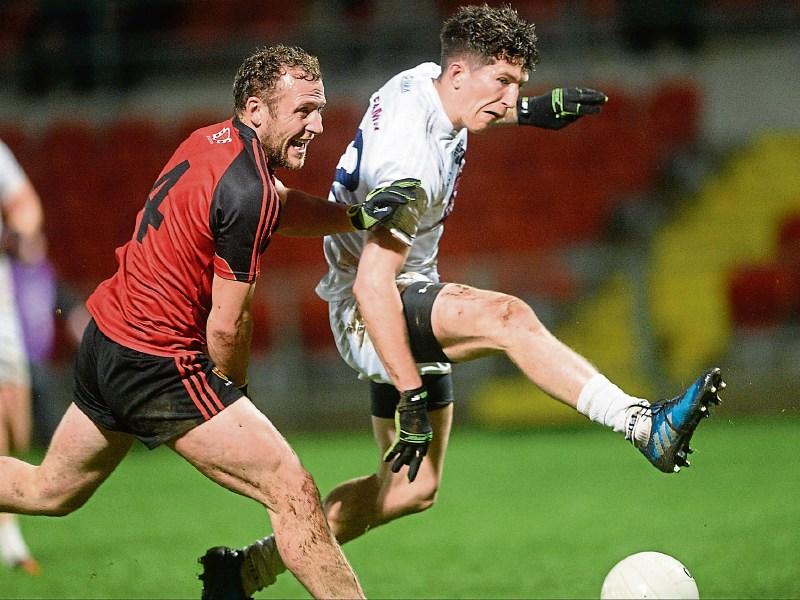 David Slattery scores his second goal against Down

Away from St Conleth's Park and once in the comfort of the press area in Pairc Esler, in Newry, we enquire what is the wi-fi code.

To the average GAA follower that list  may look just like any random combination of numbers. To  others though they may have an entirely different connotation.

Down's All Ireland winning years. Five times that Sam crossed the border to a county renowned for its exciting football, it's skills, it's magical players, its flamboyance, its household names known throughout the length and breadth of the land.

A county that GAA folk, regardless of their allegiance  loved to travel to see and witness football being played at its very best.

How times have changed.

And an official attendance of some 1,700 at Saturday's clash says it all. And no, don't point to the weather; don't suggest it was due to the rugby game and don't intimate it was because of live television.

If anyone wondered why a mere 1,700 folk turned up to see Down and Kildare in action at Pairc Esler on Saturday, wonder no more. If that is the way the modern day Down football is played then good luck to them but it was shocking from start to finish.

Most times 14 men behind the ball, playing backwards and sideways from start to finish, even when chasing the game they stuck with their two man sweeper system at all times and got out of the game  exactly what they deserved; nothing.

On this display they will go down, how far who knows.

It was muck football at its very worst. How the mighty have fallen.

For The Lilies it was another learning experience. The modern phrase would describe it as 'winning dirty' and this they did; being patient, very patient at times as they went about dismantling a defensive set-up that has the capability of destroying the game of football.

A slow burner first half came to life when half time substitute David Slattery brought his Confey goal scoring skills to the county set-up. A player who is not short of skill, has tremendous pace but most of all possesses that knack of finding the net, he did it on the double on Saturday,  his first put Down under big pressure; his second buried them.

That second goal in particular was beautifully set-up and immaculately finished. Receiving the ball from Niall Kelly, the Confey man was heading to the left side of goal but managed to squeeze the ball past Michael Cunningham with just a  touch from  the outside of his right boot squeezing the ball into the right hand corner. Class. Simply class.

But this was no one man show, not by any stretch of the imagination. Kevin Feely was adjudged the man of the match; it was a no brainer.

The Athy man's reputation is growing with every outing and on Saturday he added another string to his bow which we had not seen heretofore. Free taking.

In the absence of Neil Flynn Feely was entrusted with that extra burden and he certainly stepped up to the mark, five out of five, using both feet and any young player out there who has aspirations of making it to the top level should listen to what the Athy man had to say after the game.

“Yes I put in a lot of work during the week on frees and thankfully it paid off.”

And did he practice with both feet?

“Oh yes, always, the importance of being able to use both feet is vital; at this point I think if I wasn't able to kick equally with both feet I wouldn't be very happy with myself, it is something I have always practiced.”

A big lesson there for young aspiring footballers.

Keeper Mark Donnellan was also brought into the free taking role, hitting over Kildare's first 45 with a kick that would have found it's target from further afield.

Donnellan had another fine game making a couple of vital stops, particularly in the opening half.

Late on a long ball into his area, reminiscent of Derry, saw the Maynooth minder take ball and man which brought a retort from one nordie hack “he took the man there.”

I replied “if he did that against Derry we would be in Division 1 now” which brought the reply “he certainly learned his lesson so.” And that sums up this Kildare side. They are learning.

Still have a long way to go, but are learning with every outing; one of the most positive aspects of this team.

The drive home was short, the chat positive as we crossed the Liffey Bridge in Newbridge, the bike outside Harrigans, still chained to the post, came into sight as   news came through  Chuck Berry had passed away.

Our friend, that man of many parts, Noel Heavy, suddenly came to life in the back seat with a rendition of 'No Particular Place To Go.'

Thank God we were home!

Time to get a little excited?

Not just yet, but soon.