The Rebels gunned down by lively Lily sharp shooters 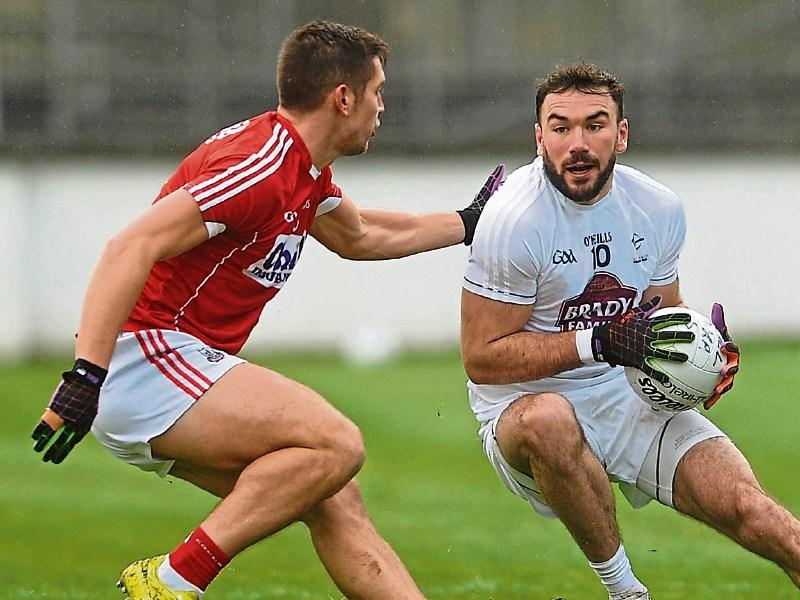 Fergal Conway has this situation under control against Cork

They were tucking into wraps, cocktail sausages, a variety of sambos, soup, tea and coffee along with lots more besides,  at the revamped Newbridge Town Hall early afternoon on Sunday as Club Kildare hosted a pre-match reception for its members.

Club Chairman, Marty McEvoy, welcomed the guests while Kildare manager, Cian O'Neill, hopped in momentarily to thank one and all for their support  prior to putting the final touches to his team's preparations.

Injured Lilies, Emmet Bolton and Fionn Dowling were on hand to sign autographs and stand in with young Lilies for souvenir pictures.

With the pre-match warm-up in the Town Hall done and dusted it was time to head to the game on a day that was so bitterly cold you wouldn't even ask the mother-in-law to go out to the shed and fill the coal bucket.

Not unexpectedly the Cork support was on the small side. The Rebels, we were  informed by one follower, “only travel for the big games.”

In fairness it was said with a bit of a smile on his feasóg, nevertheless he was fairly accurate.

The Lilies were there in decent numbers, as usual, and following that morale boosting win over The Royals seven days earlier, there was a slight hint of maybe, possibly, hopefully, something could be gained out of this one.

Supporters were heard recalling the last time these sides met, back in The Qualifiers in 2015 in the home of hurling when Jason Ryan's boys upset the apple cart big time with probably one of the best results that the former manager enjoyed in his two year reign.

Needless to say there was little or no talk of what happened in the All Ireland quarter final that followed that win in Thurles, when the boys from The Kingdom were finding the net with such regularity that 'The Gooch' took a point instead of filling the onion sack for the eight time.

Decent bloke is The Gooch.

As the clock ticked closer to the two bells a conversation (overheard) centred on the match official on the day.

“Cormac Reilly” said one Kildare supporter, “Holy God he never gave us anything in his life.”

Enough said as we rambled up through the seated area; you know you don't even have to look to see who is sitting where; the same faces in the same seats at every game, come hell or high water.

Away we went with the Meath official getting proceedings under way and but for a brilliant 'knock-over' from the visiting custodian, Daniel Flynn was nearly doing a Ben McCormack on it and finding the net before all the supporters were even in situ.

Gradually The Lilies, playing with the biting wind on their backs heading to what used to be known as The Arch Bar end, opened a bit of a lead with some quality football.

The young Ben lad brought his Navan form to home turf and caused some early (and late)  problems for The Rebels while Kevin Feely was lording it in the middle, using 'The Mark' to good effect; the Cribbin boys started like they finished in Pairc Tailteann, moving like the proverbial train.

Still The Rebels returned to the comfort of the changing room (and on a day as cold as Sunday even the St Conleth's Park dressing rooms could be described as luxury).

And despite failing to score from play, raising just three white flags in 35 minutes plus, the visitors  were still very much in it.

That lead was cut to three before Daniel Flynn scored what would have been a contender for the goal of the year. Alas the man running the line took centre stage, informed the match official that the ball had been hopped on the double; no goal.

If anything that decision raised the stakes, upped the intensity, especially for the boys in white as Tommy Moolick fired over a point before Ben McCormack had the fans on their feet with a sublime finish to the net.

Cork though were not done, found the Kildare net and when they added a point it was down to two.

Cometh the hour, Cometh the man and another new recruit stepped up to the plate, Neil Flynn firing over three on the trot to secure the win.

Next stop, Derry, a tour of the Bogside and Celtic Park.