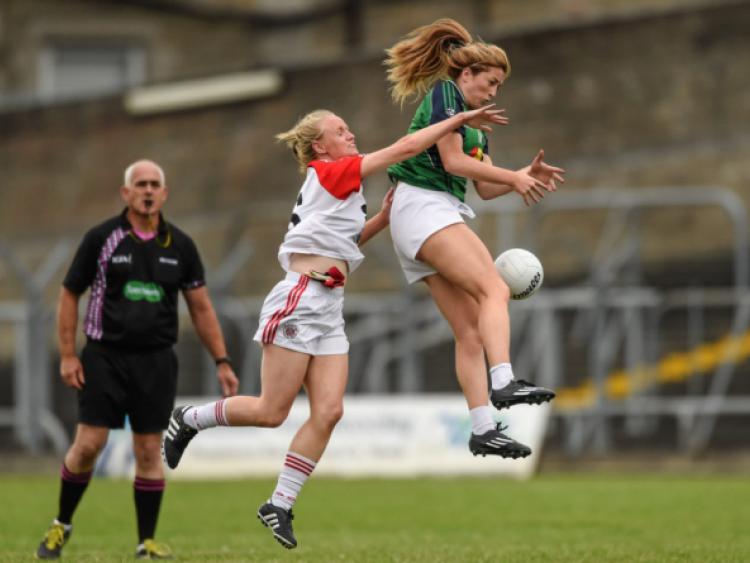 Despite a strong second-half showing, a slow opening 30 minutes from Kildare proved detrimental as it meant that they were to progress no further in this years Senior All Ireland Championship.

Despite a strong second-half showing, a slow opening 30 minutes from Kildare proved detrimental as it meant that they were to progress no further in this years Senior All Ireland Championship.

Despite the late, panicked arrival it was the Red Hand county who took to the field with purpose. Pointing twice inside the opening minute, the first coming from the electric wing forward Emma Hogarty, before seconds later Hogarty turned provider as she offloaded to Cathy Donnelly to double the Tyrone advantage.

Tyrone were to tag on a further two points before Kildare managed to get their attack to function. Midway through the opening half a wild shot from the boot of Roisin Byrne left Paula Keatley fighting to re-gain possession. Succeeding close to the far side-line Keatley worked the ball towards goal. Finding herself fouled, Elaine Dillion slotted the resulting free, putting three between the sides.

This was followed by a trio of Tyrone scores that only served to heap more misery on the Kildare side. This time captain Gemma Begley, Donnelly and Niamh O’Neill all raising the white flag.

A point from Grace Clifford in the twenty seventh minute proved to be nothing but a brief pause in the Tyrone assault.

A second Hegarty point only gave way to greater woes from a Kildare perspective. With four minutes remaining in the half a laps in concentration by the Kildare defence allowed Cara McCrossan to steal in unmarked at the back post to claim possession from Aisling O’Kane’s cross to blast past Rebecca McGuirk in the Kildare goals. As the game entered injury time Tyrone registered their first point from a placed ball, as a thirty first minute Begley free left ten between the sides.

Two quickfire Kildare points from captain Maria Moolick deep into injury time locked to cut the deficit, yet Tyrone had other ideas. Points in the fifth and sixth minute of injury time from Donnelly and Begley respectively quelled any hopes of a first half Kildare revival.

As the sides re-emerged from the bowels of the Pairc Tailteann stadium it was Kildare who drew first blood. A Triona Duggan point attempting to fire up the Kildare attack. A fifth point from Tyrone captain Begley re-established her side half-time advantage. Down but not out, Kildare managed to find the metal to attempt to fight back.

A loose kick out from Tyrone keeper Shannon Lynch fell straight into the hands of Grace Clifford, taking full advantage Clifford strode forward, as she bared down on the Tyrone goal she released her shot.

Always rising it struck the crossbar, but thankfully falling into the hands of waiting corner forward Dillion who neatly dispatched into the Tyrone net to put seven between the sides.

A point followed through vice captain Aisling Holton to leave the gap at six.

But as was the story throughout the first half, each time Kildare scored, Tyrone made there way up the opposite end to do the same and prove they had enough to handle the threat of the Kildare attack.

With 20 minutes remaining on the clock, a cross-field ball found full-forward Alanna McShane. Palming past McGuirk, it was soon double scores as Tyrone lead 2-12 to 1-6.

Further points from Dillion and Clifford again edged the deficit downwards, though Tyrone were not in the mood for a dog fight. An O’Neill point keeping Kildare off their coat tails.

Following this both sides briefly traded a series of points, Clifford striking first from Kildare before Begley responded. A Dillion free moments later was again responded to by Begley, before Moolick and Donnelly took their turn in trading points four minutes from time.

With time running out and eight points separating the sides Kildare were in need of a goal if they were to have any hope of keeping their championship dreams alive.

Unfortunately this wasn’t to be as Holton and O’Neill traded points before Begley profited from a breakdown in the Kildare attack to register the games fourth goal, and Tyrone’s third of the evening.

A final point from Holton four minutes into injury time meant that Kildare would have to shelve their championship ambitions once again as despite an equal and competitive second half they fell victim to a ruthless Tyrone side.