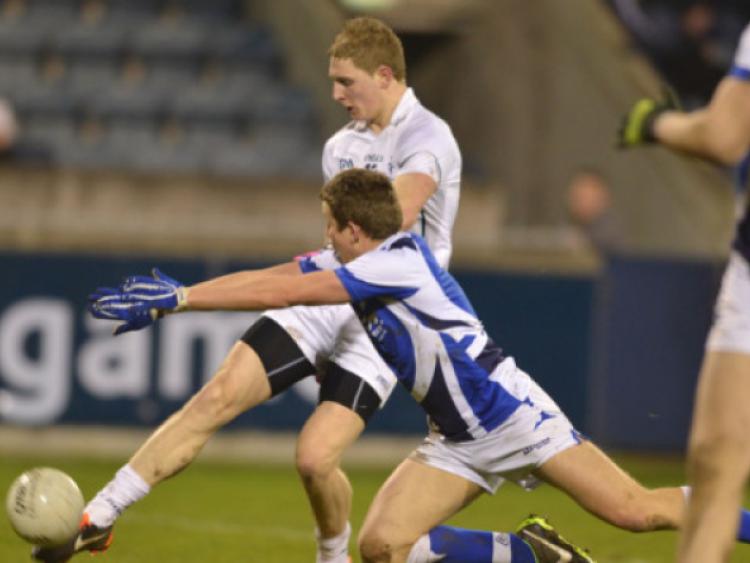 IT was back in 1964 that the first ever Leinster U21 football championship was played and while it was Laois that collected the Flood Cup (named after Louth man Seamus Flood who was Chairman of the Leinster Council from 1939-1941) it was a competition that Kildare became very familiar, as well as very successful in as the following season The Lilywhites began a three year winning run that of course included that famous All Ireland success in 1966, writes TOMMY CALLAGHAN.

IT was back in 1964 that the first ever Leinster U21 football championship was played and while it was Laois that collected the Flood Cup (named after Louth man Seamus Flood who was Chairman of the Leinster Council from 1939-1941) it was a competition that Kildare became very familiar, as well as very successful in as the following season The Lilywhites began a three year winning run that of course included that famous All Ireland success in 1966, writes TOMMY CALLAGHAN.

When Kildare folk think of Leinster U21 football they invariably think of that great side; a sdie overflowing with talented players that to this day one can but scratch one head’s in absolute wonderment as to how they failed to ‘train on’ to the senior ranks and gain the ultimate honour.

It is a topic that often rears its head among Kildare footballing folk and while the reasons are many (most it has to be said could not still be printed) at the end of the day it didn’t happen much to the disappointment of the loyal Kildare supporters.

Kildare have amassed nine of the forty championships that have been played to date and lie in second place in the U21 Roll of Honour. The Dubs head the list with just one more while Offaly, Meath and Laois have eight each with the other six titles going to Louth (3), Westmeath (2) and Wexford (1).

So tomorrow night (April 3) The Lilies will have an added incentive of joining Dublin at the top of the pile while their opponents, Longford, will be seeking to bring home the Flood Cup for the very first time in their history.

Dublin, of course, were the hot fancies to take the cup back to the captial again this season and following their hammering of Carlow in their opening game, they (Dublin) were so impressive that there were calls for the city to be split into two, such was their dominance.

Of course we all know what happened following that win when they were shocked by Longford in the quarter final by a single point.

There were however many who felt that Longford were in there with a shout, so much so that their odds of 6/1, it is reported, was availed of and availed of in substantial quantities by Longford supporters.

Remember this is the Longford side that would have grown out of the 2010 minor team.

2010 … does that ring a bell for Kildare supporters?

It should for that was the year, not for the first time I hasten to add, many Kildare supporters were rubbing their hands in glee at the prospect of going all the way in the Leinster Minor Football Championship only to be halted at the semi final stage by Longford.

It was a one point game but one point is worth fifty points if you are on the right side of a result and Longford certainly were that night, winning on a score line of Longford 3-5 Kildare 0-13.

A painful, painful evening and with a few of the Kildare stars sitting on the side line, nursing minor knocks (some would say with an eye on the final) Longford took full advantage and held out.

Incredibly 12 or 13 Kildare players that saw action in that 2010 minor voyage are now back for more three years later, while Longford will have ten of their starting line-up from that day.

Following Kildare’s opening game win over Meath at Pairc Tailteann, Navan, coupled with the shock exit of Dublin on the same evening, The Lilies were instantly installed as roaring hot favourites, in from 11/2 to 10/11 while their odds of going all the way to All Ireland glory were also substantially cut and there is no doubt that Kieran McGeeney was acutely aware of the situation as only minutes after Kildare had disposed of Laois McGeeney was moving swiftly and decisively to put a damper on the growing expectations.

“Nothing has been won” McGeeney rightly insisted, practically imploring anyone within earshot not to put his side up on a pedestal, a pedestal that so many Kildare teams, from minor to U21 and all the way up to senior have been before, and have, more times than not, disappointed, fallen and came away empty handed.

McGeeney might be far from a ‘local’ and even further from a ‘native’ but he knows his Kildare history and he, along with his fellow selectors and management team, will do everything that is humanly possible to shield these lads from threading where so many in white have threaded before.

Having said that this Kildare side does look like a real talented side laced with talent from one to fifteen and even beyond as the display against Laois emphasised.

Of course one has to question just how good (or otherwise) was that Laois side?

A very young side by all accounts with the vast majority with at least two more seasons at U.21 level ahead of them, so impressive and all as Kildare were on the night, one would certainly not want to be looking too much into that win.

Longford, following their win over Dublin faced up to a Wexford side that they were expected to push aside with ease in their semi final clash in Portlaoise.

And they certainly looked to be on their way, hitting a very impressive 2-5 in the opening fifteen minutes with the game looking all but done and dusted. With the influential James McGivney (one of the stars of that minor side) pulling the strings and the classy Mark Hughes providing the finishing touches it seemed the Leinster champions of 2010 were on their way to another provincial decider.

Wexford, to their credit, did not read that particular script and came storming back to level up matters with less than five minutes remaining but try as they might they couldn’t get their noses in front and with Longford being led brilliantly by their captain Pádraig McCormack , a few late points from Robbie Smith and McGivney saw them just get over the line despite a near second half collapse.

And so to tomorrow night.

There is no doubt the wide expanses of O’Moore Park should not pose a problem for Kildare, their open, attacking play looks ideally suited for that green sod.

Kildare undoubtedly have the players to win this one but only if they perform on the day and while that sounds a bit predictable one must not forget that a Leinster U21 football final is a big occasion, players don’t get many chances at this level and one never really knows just how lads will react on the day, or the night in this case.

In many respects this Kildare side is really an unknown quantity and while they have looked extremely impressive when going forward, the defence has not really not come under any real sustained pressure, particularly the full back line.

That, of course, is not to say the defence as a unit is not strong, far from it, but they have not really been tested and unless and until they are we will not really know just how tight, or otherwise they are.

The layers have no doubt but bookies odds have not won any trophies yet, let it be GAA or soccer or rugby of what ever you fancy. Odds as low as 4/9 are being quoted on Kildare while Longford are out as far as 9/4. The handicap of -2 looks attractive at evens but then again Longford were quoted as much as 6/1 to beat Dublin and look what happened.

Longford have absolutely nothing to lose, just as they had nothing to lose back in 2010, so it hardly needs suggesting that Kildare must thread carefully tomorrow night.

It certainly looks like it is Kildare’s to lose, a great opportunity to take home a Leinster title … but then again where did we hear that before!

Check out www.leinsterleader.ie/sport for match report on Thursday morning.