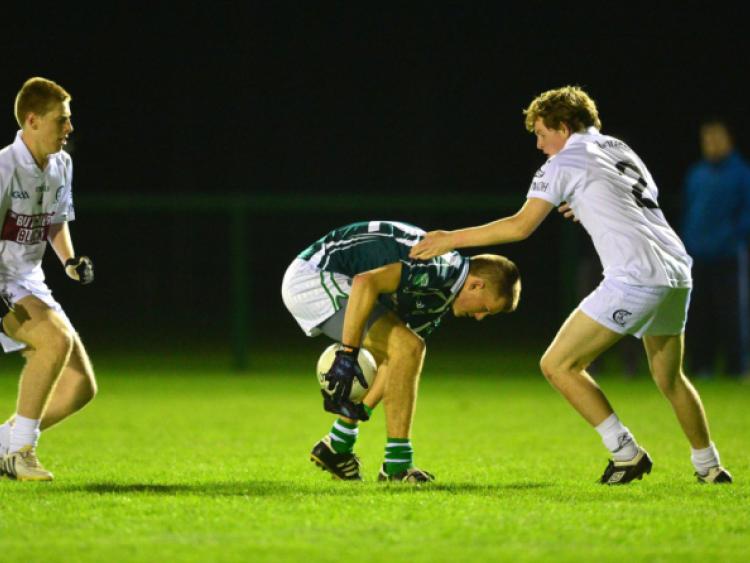 Only a single point separated these two sides over the course of two games as Clane managed to get the better of a spirited Confey display in this Minor B’ Football Championship Final replay in Hawkfield last Friday evening.

Only a single point separated these two sides over the course of two games as Clane managed to get the better of a spirited Confey display in this Minor B’ Football Championship Final replay in Hawkfield last Friday evening.

The original fixture finished honours even the previous week, following a superb Clane comeback, clawing back a six point deficit in the final four minutes of the game to force a replay.

Friday night’s clash however was just as, if not more, exciting than the first. Confey opened the scoring inside the opening 15 seconds with a point from their number 15 Conor Dennehy. That was soon cancelled out as Clane got into their stride and hit three points in a row, the first from the boot of Kyle Devey, followed by points from Steven O’Connell and Ethan O’Donoghue (free) respectively.

The opening period was a rather intense affair and played at a very high tempo with the majority of the game’s scores coming within that time-frame. Points from Confey forwards Conor Dennehy and Colm McKiernan restored parity between the two sides before man of the match Cathal Egan broke through from his usual half-back position to rattle the back of the net for Clane.

Egan’s goal on 12 minutes was the first of four to come in the first half. Following points from Ethan O’Donoghue and the Devey brothers Jake and Kyle, Clane got their second goal with seven minutes of the first half remaining, Tomás Earley found the unmarked Michael O’Reilly on the edge of the Confey square who calmly slotted the ball past the onrushing Aidan Kavanagh.

It was however Confey who finished the half the stronger and managed to raise the green flag twice in the space of four minutes. First Colm McKiernan’s effort took an awkward bobble in front of Clane goalkeeper Robert Phillips and trickled over the line before Conor Dennehy rose highest amongst the opposing defence to fist the ball just under the crossbar after some excellent play from McKiernan leaving the score at 2-7 2-6 at the interval.

The first half was always going to be a hard act to follow and although the second didn’t display the same amount of scoring, there was still plenty of excitement and late drama.

Ethan O’Donoghue, who was the starman between these two sides in the previous meeting set the scoreboard ticking once again with his first point from play after just two minutes had elapsed. Tomás Earley followed that up with a point after 11 minutes before Confey were denied a third goal as Andy Doolin was denied by Phillips.

It took Confey all of 18 minutes to get their first point of the second half as substitute Josh Collins landed a free off the ground. Both teams then exchanged points as Confey tried to conjure up some sort of opening to find that crucial equaliser but to no avail as the cup made its way back to Conneff Park in Clane.