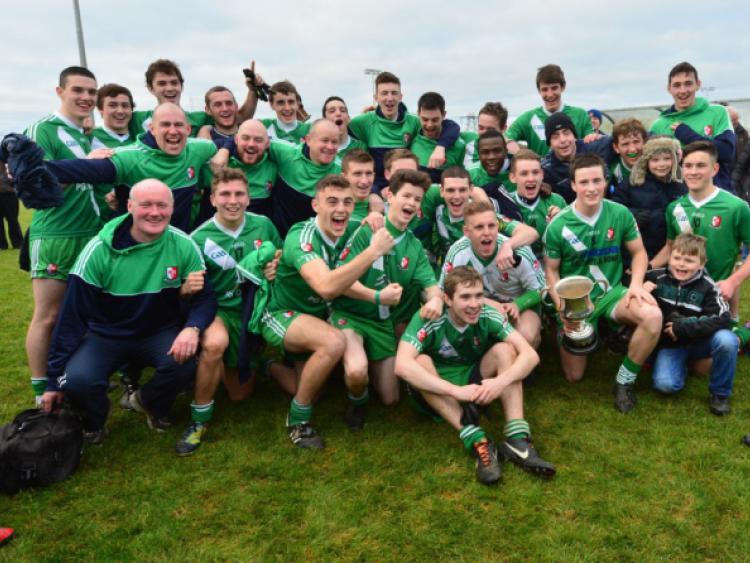 Sarsfields upset the hot favourites, Balyna, to capture the Tony Donohoe U21 ‘A’ Football Championship with a brilliant display of open attacking football at Hawkfield at 12 noon on Sunday last.Tony Donoghue

Sarsfields upset the hot favourites, Balyna, to capture the Tony Donohoe U21 ‘A’ Football Championship with a brilliant display of open attacking football at Hawkfield at 12 noon on Sunday last.Tony Donoghue

Without a doubt one of the youngest U21s sides to lift this trophy, not alone are many of the winning side minor this year but are minor once again in 2014.

Nevertheless it was Balyna who opened brightly with Seán Hurley, just back from a two week trial in Australia, firing over after some 40 seconds and inside a minute  Balyna were back on the  attack again.

This time a Paul Cribbin attempted point came crashing off the upright only for full forward Cian McMonagle to gather and crash to the net.

Sarsfields, however, did not panic and gradually worked their way into the game with two Barry Coffey points, one a free.

Balyna’s David Pyke picked up an early yellow before Dan Nea reduced the deficitt. The same player added another to level the scores but Balyna went back in front when Harry Morrin split the posts mid-way through.

Cian Byrne elected to take a point when a goal chance was on to tie them up and while Paul Cribbin regained the lead for Balyna it was from here on Sarsfields upped their game playing a lovely brand of football mesmerised Balyna as they hit six points without reply.

Barry Coffey opened with the first of the half dozen followed by three from Seán Dempsey (one a 45) and two others from Ronan Fitzgibbon and Ben McCormack as the Sash went in at the break leading 0-11 to 1-3.

The favourites looked in real trouble but came out of the traps in the second half like their lives depended on it.

Ben Kenny opened inside 30 seconds followed by Jimmy Farrell as Balyna took control around the middle and looked a different team completely.

Two Seán Hurley frees left just a single point separating the sides with only four minutes gone in the second half.

Then Balyna were dealt a big blow when Daniel Pyke picked up a second yellow (continuous fouling) and he was off for an early shower.

Barry Coffey settled the Sarsfields nerves with a free with Dan Nea adding another but in fairness should have found the net, his shot rising from close in.

Cian McMonagle kept Balyna in touch but Sarsfields with ten minutes remaining could see the line and as they did in the opening half stuck rigidly to their game plan, attacked in numbers, spreading the ball all over the park impressively.

Ben McCormack, who had a fine game throughout increased the Newbridge lads lead to three (0-14 to 1-8) before the game should have been wrapped up when an excellent Sarsfields attack saw Diarmuid Hartley in a position to find the net but his fisted effort was brilliant blocked by goalkeeper Keith Wilkinson.

Ronan Fitzgibbon stretched the lead to four and while Seán Hurley converted a late free it was not enough as Sarsfields deservedly won this U21 ‘A’ title on a score line of Sarsfields 0-15 balyna 1-9.