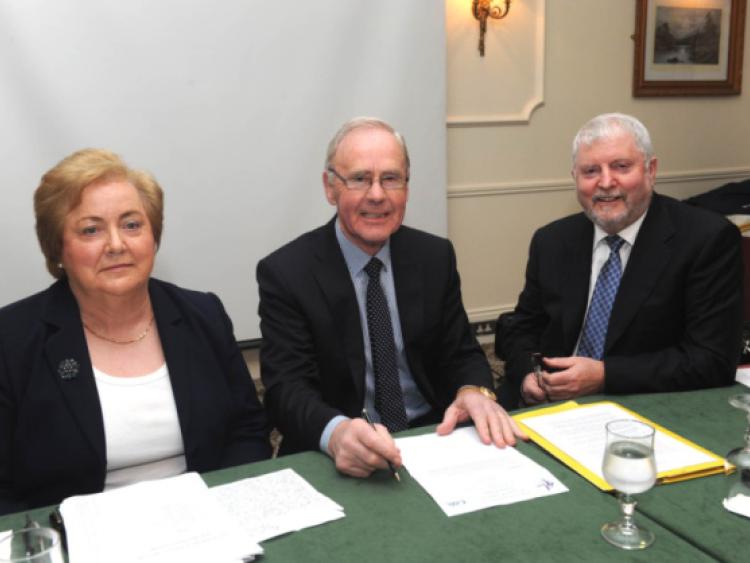 Outgoing Chairman Pat Mangan certainly did not mince his words as he addressed the AGM of Club Kildare for his final time at Keadeen Hotel last week.

Outgoing Chairman Pat Mangan certainly did not mince his words as he addressed the AGM of Club Kildare for his final time at Keadeen Hotel last week.

The following is his address to some sixty or so members.

“I said in my report at end of 2012 that it had been a frustrating and difficult year for Kildare GAA and Club Kildare and I also said that the new arrangement would bring change and challenges, but I certainly did not anticipate the enormity of the frustrations and challenges that we would encounter from the people who were supposed to be working with us.

“I feel sad tonight that it has ended like this, it was never the way I or any of my fellow executives wanted things to end up. We were left in a situation where accurate information was not forthcoming, meetings on fund raising taking place without our knowledge, deliberate obstruction to our well flagged events and a total lack of co-operation.

“Unfortunately we had to accept that the powers that be did not want our presence any longer, so we were left with no option only to resign, hopefully the people who replace us will not be treated similarly and will be allowed to fulfil their role properly.

“Before I leave the pitch I want to express my sincere thanks to the large number of people who have shown tremendous loyalty to me, Club Kildare, and Kildare GAA over the many years that I have been involved.

“I have been very touched over the past couple of weeks by the large number of people who have taken the time to ring and text me with their support, particularly the players and managers past and present who wanted to express their gratitude for the tremendous support and relationship they always enjoyed with Club Kildare.

“I want to thank the many loyal Supporters who bought and sold tickets, joined Club Kildare or helped in any way. The businesses of Kildare who were so generous with their sponsorships and contributions to support our teams.

“I want to express my sincere thanks and gratitude to the dedicated executives of Club Kildare who have worked tirelessly at every initiative that we came up with over the years, to make a success of it and bring in the money to support our county teams to achieve the ultimate dream.

“It has been a pleasure to work with these highly efficient, loyal and totally committed people who were giving of their time and money for the love and success of their County.

“I want to send best wishes to our Treasurer Pat Daly who is ill at the moment and undergoing treatment, we wish him a speedy recovery.

“I want to thank the local press, Tommy Callaghan of Leinster Leader, Ger McNally; Brendan Coffey of The Nationalist and Clem Ryan of Kfm Radio for their help and support to Club Kildare over the years.

“I wish the incoming officers of Club Kildare the best of luck and hopefully they will be supported and allowed develop the vitally important element of fundraising to ensure our teams are given everything they require to compete at the highest level.

“I wish all our county teams every success over the coming years and I look forward to watching and supporting them, I sincerely hope they can succeed and fulfil my lifetime dream of bringing the Sam Maguire Cup back to Kildare in my lifetime.”