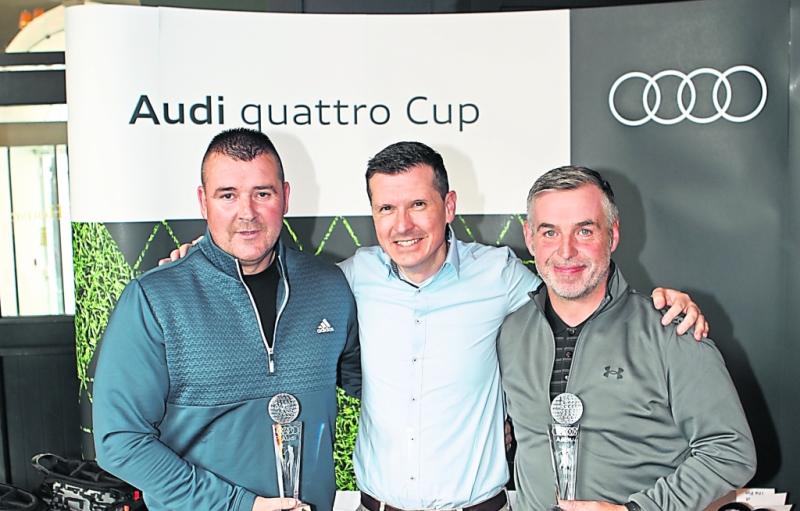 The quattro Cup is back on Irish soil after a break of two years with the Audi Naas regional competition taking place on Sunday, June 12. Having been postponed in recent years, interest levels were exceptional with a total of 84 golfers in 42 teams taking part in the tournament in mixed weather conditions at Carton House Golf Club.

Brian Stacey and Trevor Hogan were announced as the winners with a score of 44 points who now claim the prestigious title of the Audi Naas regional winners.

In a tightly contested competition, the winning team claimed victory by four points. They, along with the next five highest ranking teams, qualify for the national Audi quattro Cup final taking place at Killarney Golf & Fishing Club on September 7.

Additional regional events are being hosted for Audi customers by Audi dealerships at some of Ireland’s best golf courses to determine who will join the Audi Naas qualifiers in the national final.

The prize for winning the national quattro Cup will be to represent Ireland at the Audi quattro Cup World final, taking place on the on the Marco Simone Golf Course in Rome.

The famed Golf Course will host the 2023 Ryder Cup and is also host of the Italian Open, one of the biggest European Tour events. All participants will be staying in the Rome Cavalieri, A Waldorf Astoria Hotel.

The world final will see the victorious Irish pairing tee off against 40 participating countries. The Audi quattro Cup tournament welcomes approximately over 80,000 golfers globally, making it the largest amateur golfing tournament in the world.

Jackie Stafford, general manager, Audi Naas commented: “Audi Naas is delighted to be back again to host the Audi quattro Cup heat. The Audi quattro Cup is an event we always look forward to and after the two-year break there was incredible excitement! We are thrilled to see it back.

“This is one of the unique offerings that Audi brings to our customers and it is great to see the interest in participation, standard of play and level of competition. On behalf of everyone at Audi Naas, we’d like to wish our finalists all the luck for the national final of the Audi quattro Cup.”