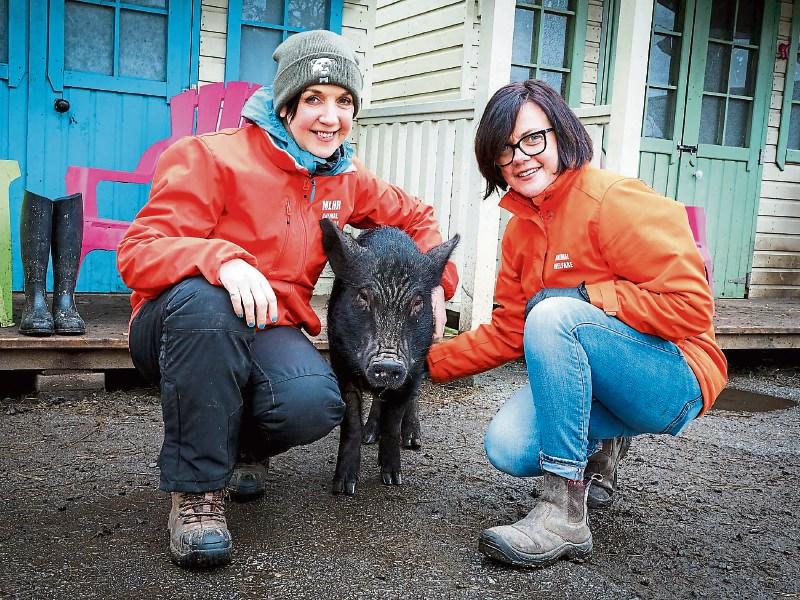 Sisters, Martina and Deborah Kenny are founder members of MLHR

Daphne rises every morning, stretches out her legs, and lets herself into the kitchen where she snuggles in beside the radiator where she tucks into her breakfast.

No, this black beauty is not one of the volunteers — she is one of the pigs taken in by the My Lovely Horse Rescue (MLHR) charity several years ago. A character in the yard, Daphne has a welcome for everyone.

Nestled away in the north west Kildare countryside, the work of the charity, which was founded by sisters Martina and Deborah Kenny and singer Cathy Davey almost 11 years ago, covers the entire country.

With 550 animals on site, the farm depends almost entirely on fundraising and support from volunteers.

There to greet us when we arrive is Claire Roberts. Behind the Covid mask her Scottish accent lilts through.

The young worker arrived on a volunteer programme— Work Away. Having spent 10 years in New Zealand, she arrived home to the UK as Covid started to emerge. Looking for a new opportunity, she decided to come to MLHR.

“You could get calls at any point of the day or night. We are volunteer led. The majority of people involved in the charity are volunteers. We are doing what we can. It’s very tough,” she says.

“Obviously we love the animals but, for me, it’s the people as well.”

Claire was bowled over by the passion of the charity’s founders and she says that enthusiasm filters through to all the volunteers.

“We find them inspirational,” she adds.

“Eleven years ago, there was nowhere for these animals to go.” 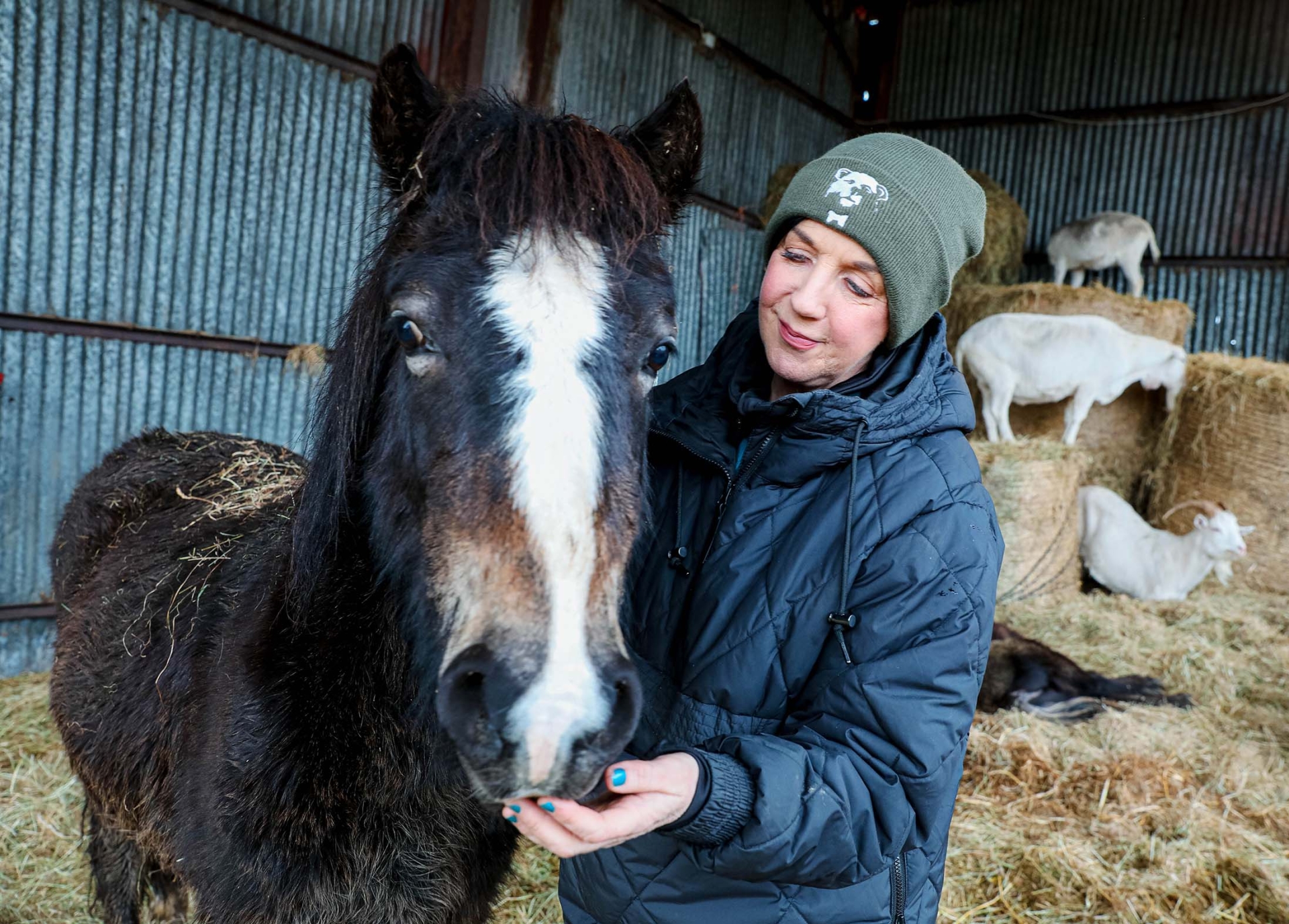 As we chat, Rebecca the greyhound and Charlie the dachshund potter over for a pet.

“We do a lot of educational work with schools and groups, We really believe in educating people about animals. With Covid, that had to stop, we had some classes on Zoom and we did videos.

“We do a lot with children from different backgrounds, clubs and groups, people with disabilities. We like to bring them to the farm, but obviously it’s a working farm and safety is hugely important so we have to take that into account.”

It also runs a dedicated pig rescue nearby with 60 pigs, which was launched in 2020.

Claire explains that not all the rescue pigs are factory pigs.

She says that sometimes people are tricked into buying a micropig, but they often turn out to be a different breed and grow too big.

“Sometimes people don’t realise the amount of space pigs need and they can get aggressive if they don’t have the required space and are not stimulated enough.” She tells of how the much-loved Wilbur was the first pig to arrive at the farm. 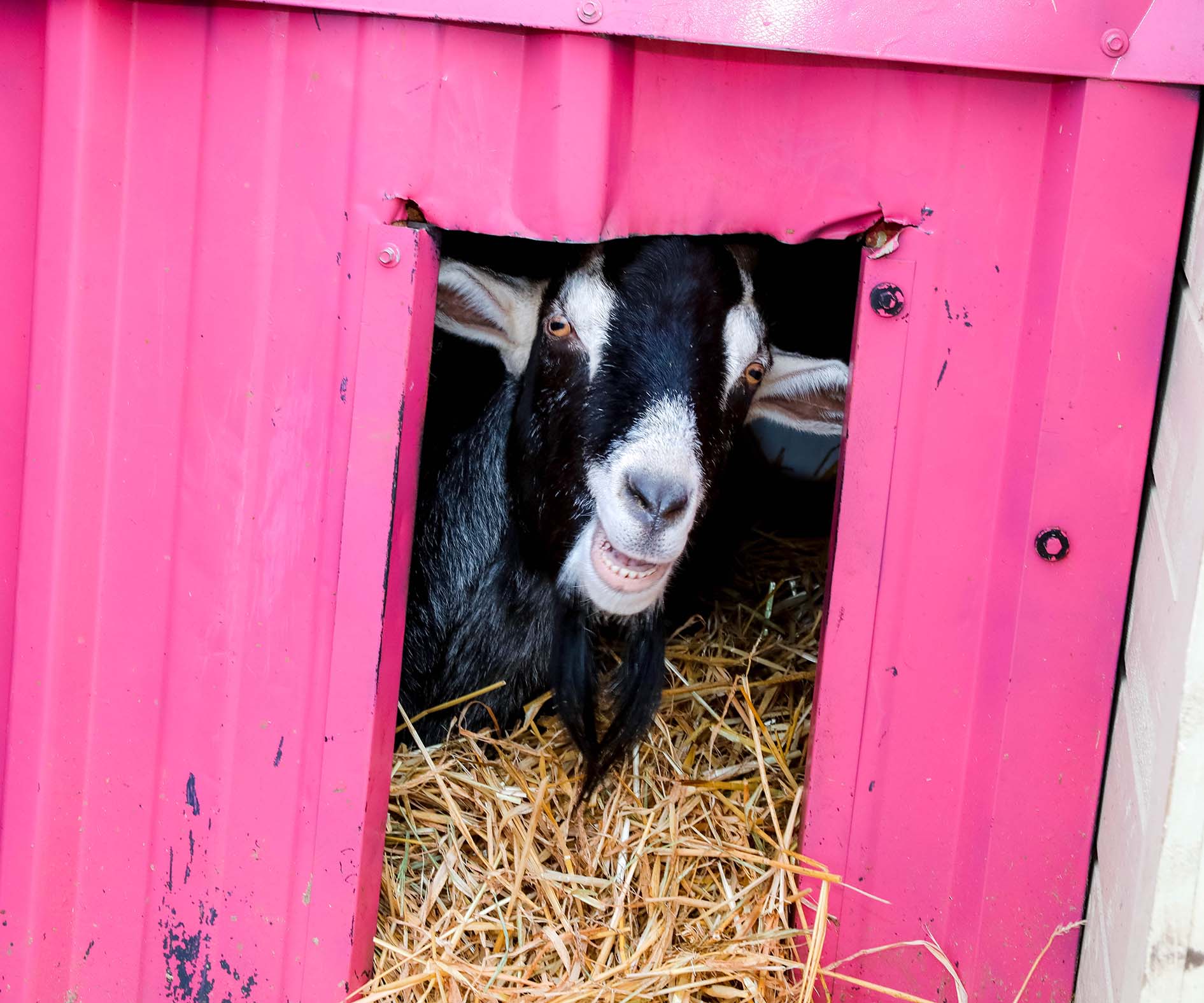 There is always a large volume of animals coming in. In fact during our visit, two ponies are brought in from the Dublin pound.

When re-homing, the charity always does home checks and once adopted, it still retains ownership of the animal for their lifetime so they can ensure they are safe. This means they can’t be sold, bred, or passed on to another owner.

So if the new owner’s circumstances change and they can’t look after the animal, they can ring MLHR and it gladly takes them back.

“We always check in with the owners to see how they are getting on,” remarks Claire.

“There are an awful lot of people who want to adopt an animal but they don’t realise that they have to be in pairs. No donkey or horse will be adopted on their own.”

There is also a small MLHR in Cork, which can respond to calls in that region. 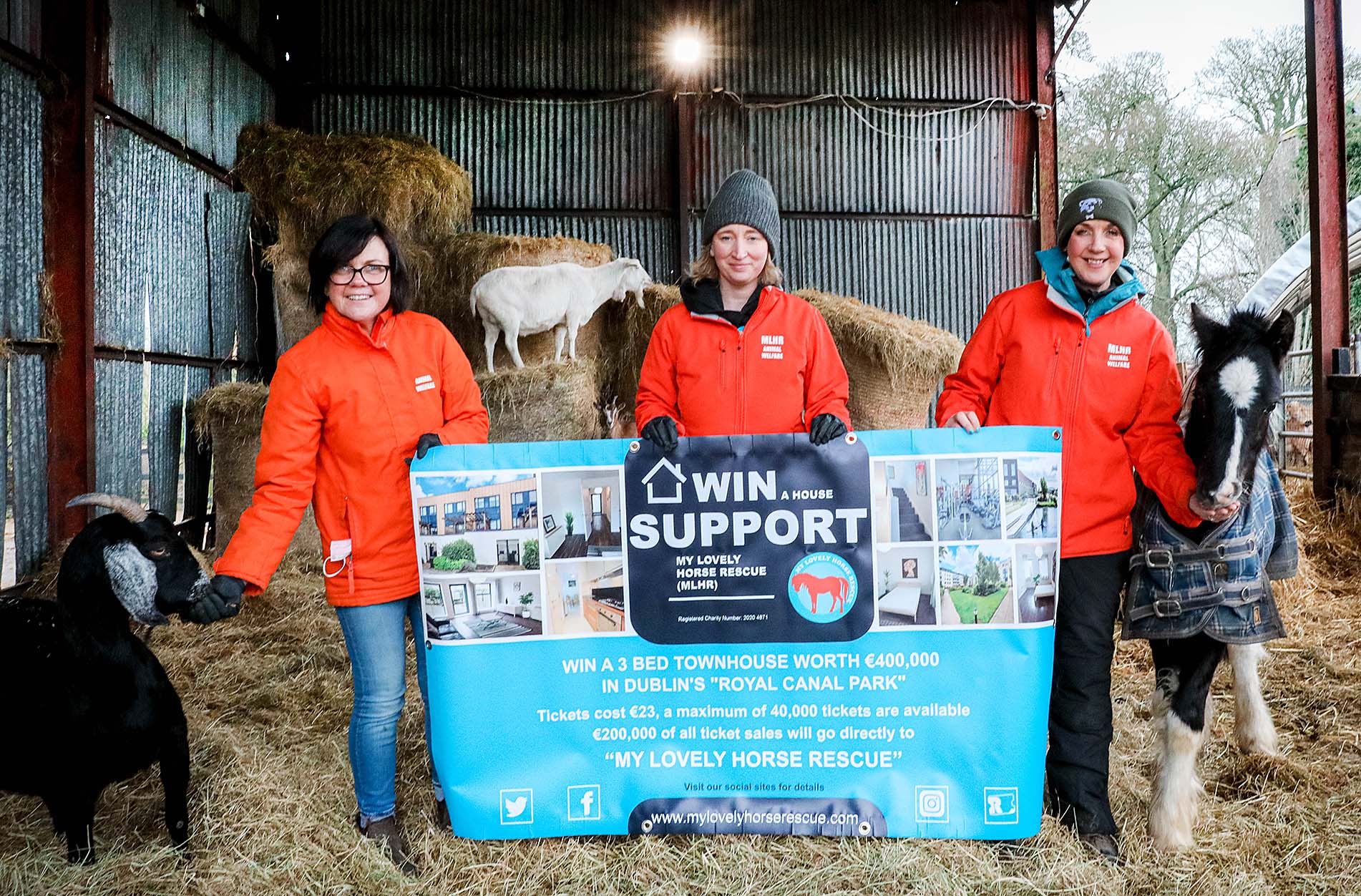 The charity is constantly being contacted about horses who are dying or distressed.

“We cannot seize horses, we don’t have the ability to do that so we have to request the gardai and a vet to get involved in order for that to happen. We have a lot of volunteers around the country so if we get a call, we will put out the word and ask if anyone is near there, can they go and assess the situation while we are on the way. It is hard to cover the whole country.”

On Christmas Eve, the volunteers were out in a field in Dublin looking after horses.

“There we were doing our Christmas shopping in the supermarket and we got the call, we had to ditch the shopping and out we went. No one else is open on public holidays,” says Claire.

Even as she speaks, you can tell that despite the emotional aspect of the work, this Scottish lady wouldn’t want to be anywhere else.

Co-founder Martina Kenny explains they have just been given an option to buy the place but obviously funds are a problem.

So how did it all begin?

“We found there was a real need to help horses. Myself and Deborah are from the Ballyfermot area and we saw a lot of horses in need of help.”

They would ring the local services but said they got no help. They met Cathy Davey through volunteering for animal charities.

Eventually they became so frustrated that they took in two horses that were distressed and it went from there.

“People heard what we were doing and suddenly we had this huge amount of calls, people looking for help, and a man called Moss let us use some land he had. He helped get us up and running.”

Martina tells how they decided to call the charity My Lovely Horse after the Fr Ted song which was produced and co-written by Neil Hannon, (who is a patron of the charity). 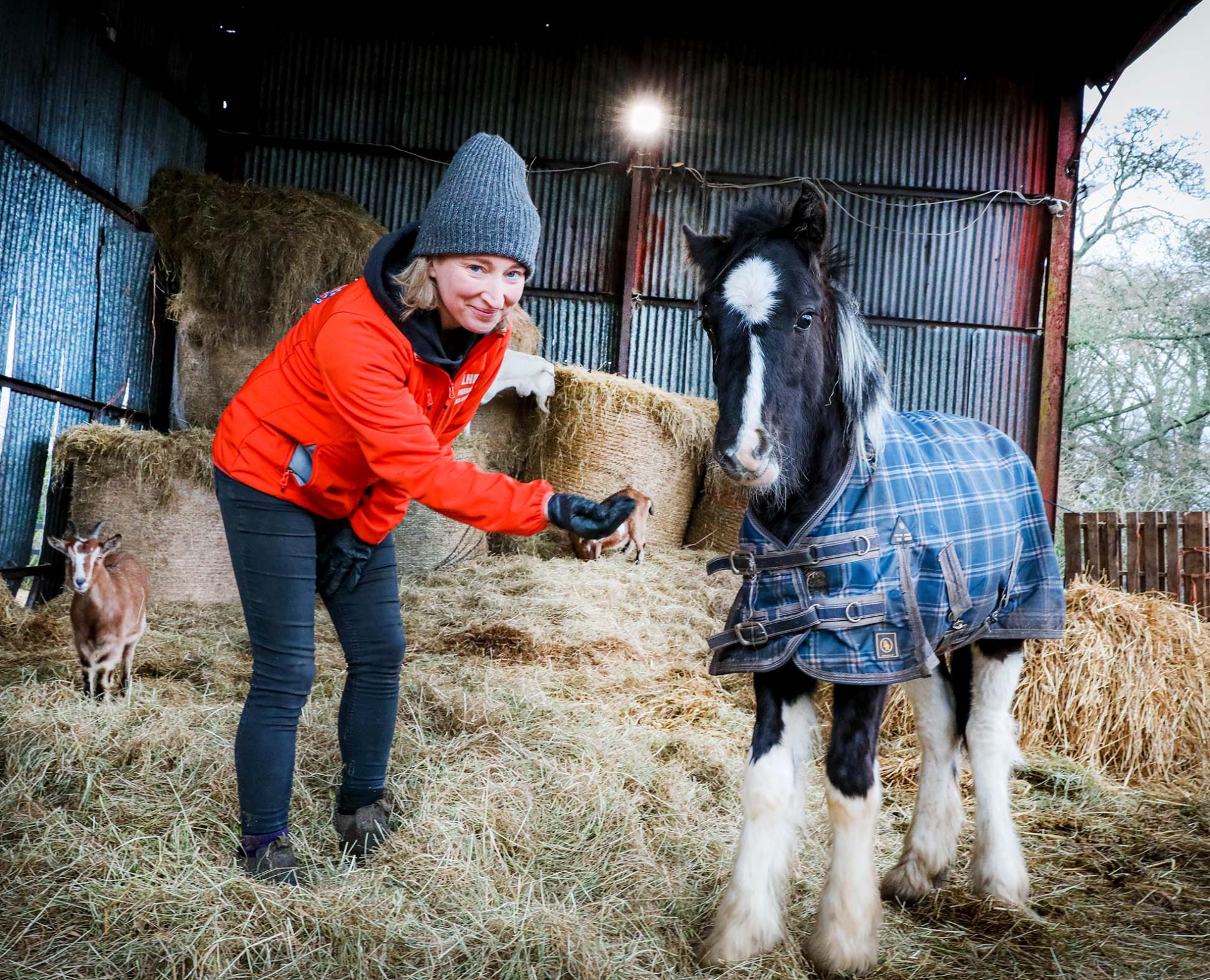 In pre-Covid times, the volunteers travelled around the country raising funds and awareness for the charity, including a visit to Electric Picnic every year.

The latest fundraiser is a house draw. A three-bed Dublin home in Royal Canal Park worth over €400,000 is being raffled in an online draw. Tickets cost just €23 each and sales are capped at just 40,000 tickets.

If all the tickets are sold, the charity will receive €200,000 which would give them a huge boost.

Martina said they would be able to so a massive amount of work including the installation of backs on some of the sheds, more dry standing areas and much much more.

Daisy the goat agrees as she has a little nibble on the pages of my notebook.

Pigs Bertha and Pearl enjoy lying up in their shed while all the other animals give us a royal welcome.

Even Colson, the young foal, gets in on the act.

So if you would like to buy a ticket for the house draw to be in with a chance to win this fab property and help the charity at the same time, click here For more information log on to www.mylovelyhorserescue.com/ 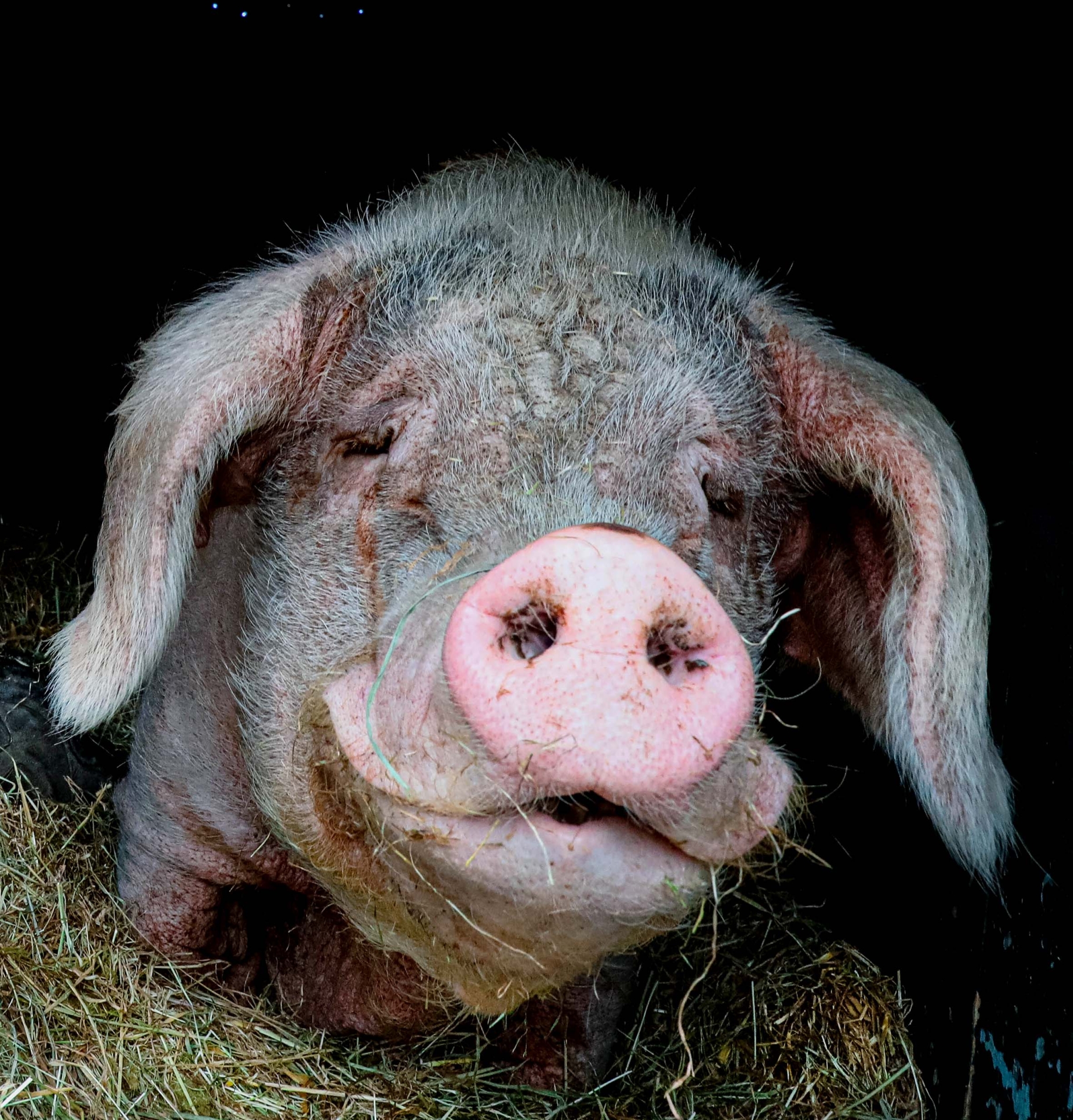