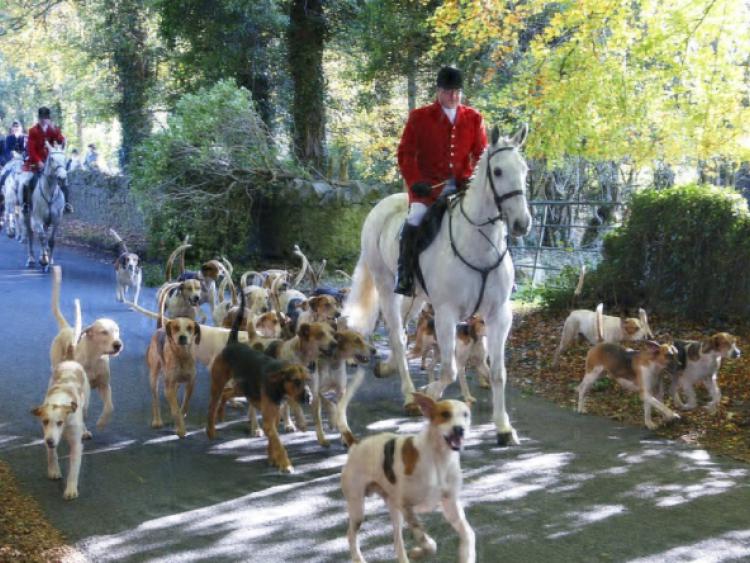 It’s a world full of tradition and history - a familiar spectacle this time of year, every year for the past several centuries.

It’s a world full of tradition and history - a familiar spectacle this time of year, every year for the past several centuries.

The Kildare Hunt was founded in 1793, around the same time that the canals were being built.

In the 220 years since then, the world may have changed, but the essentials of the pursuit have not.

It’s still about people on horseback, dressed up rather nattily, using hounds to chase after foxes across a cold farming landscape laid barren by the advancing winter.

With its genteel hot port, hounds, bugles, bowler hats, horsemen and women of varying ability and its archaic titles such as ‘Masters’ and ‘Whippers-in’, it’s easy to forget that this is one of the most oldest extreme sports around.

To this day, the Hunt participants still make a donation to the “Fallen Fund”. When not needed, it goes to a deserving cause.

The Hunting Association of Ireland note that “hunting with hounds is a tradition that goes back to ancient times and features strongly in Celtic literature and legend”.

However they add that “never in our history has hunting been so popular.

“In twenty-first century Ireland as many as 300,000 people from every walk of life, between the years of 8 and 80, participate in some form of the sport.

“It is quite common to find three generations of a family hunting together,” the HAI explain on their website.

Yesterday, Monday, November 4, the Kildare Hunt held a Hunt in the fields between Ballagh cross, Donadea, Tiermoghan and at Connolly’s Pub, Ballagh Cross, near Donadea.

It was the second such event of the season - the first was held in Punchestown two weeks previously and Liz Perrse, one of the Joint Master’s of the great success said it was “a cracking day, absolutely brilliant”.

The Kildare Hunt Club, which is based in Punchestown, runs the hunts. They are held three times a week, on Mondays, Thursday and Saturdays and attract anything from 30 to 100 people each time.

Weekend hunts atrract more obviously, but there is a good number of people who come during the week.

“It depends on the day,” Liz explained.

“A lot of people are farmers, and they can take a day off and work around it.”

And then there are those who, instead of taking their holidays in two weeks-long blocks like the rest of us, take a day every week and go hunting.

“There are 54 meets in the whole season,” she explained.

“It creates a lot of employment, with two full time staff and a couple of part time staff.

“There’s also the income generated by the actual hunt.”

And then there’s indirect revenue raised with people hiring horses, buying tack, hay and other equipment necessary when owning a horse.

“I suppose that’s the whole equine thing, it’s so big in Kildare.”

In an average day, the hunt might cover 30 miles, but it could be in a relatively small block of land.

Organisers of a hunt liaise with local farmers for blocks of land.

In the case of yesterday’s hunt, it was reasonably small. “We wouldn’t even go as far as Newtown (a small village a couple of miles from Ballagh Cross),” Liz explained.

“Then, it’ll be back to Connolly’s for hot port (there’ll be hot port beforehand as well apparently),” Liz told the Leinster Leader last Friday.

“And they’re being very good. They’re putting on a bit of food for us as well.”

On top of the employment, the social aspect, the hot ports and generally getting a bit of exercise in the fresh air, there’s also an aspect of the Hunt that will appear controversial to some, but self-evident to others.

The essential aim of any hunt is to catch a fox.

In the 1790s this may not have come between anybody and their sleep, but sensibiliites have changed since then, and there are many who regard it as barbaric.

It has been outlawed in the UK.

On their website, the HAI make the claim (under a section entitled ‘The Facts’) that “wild animals lack the complex brain and mental abilities necessary to perceive the human concepts of fear and death. For the major part of any hunt the quarry is under no abnormal stress.”

“What might be a devastating experience for man or domestic pet is part of normal daily life in the wild.”

But Liz says that they rarely catch a fox, and are more likely to “scatter them”.

And the HAI say that some 80% of foxes detected elude hounds due to the scent being lost.

“The odd one we do catch tends to be old or sick, and so we put them out of their misery.

“There are no vets in nature,” she added.

Countering the argument put forward by opponents of hunting that a civilised society should not condone it. the HAI note that “wild animals do not live in civilised society and those people who would put them there do them no favour whatsoever”.

They also claimed that “no hunting person kills or culls animals for pleasure.

“Hunting has to be carried out to preserve the health and vigor of wild animal populations that are without natural predators in our present day countryside,” and they make reference to “man’s responsiblilty to manage the countryside he has created”.

But watching the participants of any hunt meeting up in the morning and chatting over a strong and/or hot beverage, it’s hard to escape the feeling that this is less about chasing after foxes and more about the social aspect of meeting up with your friends.

As if to prove the point, the HAI say it is quite common to find three generations of the same family hunting together.

Hunt lovers pass the tradition from generation to generation, and a love of riding their horses across the Irish countryside at its most inhospitable.