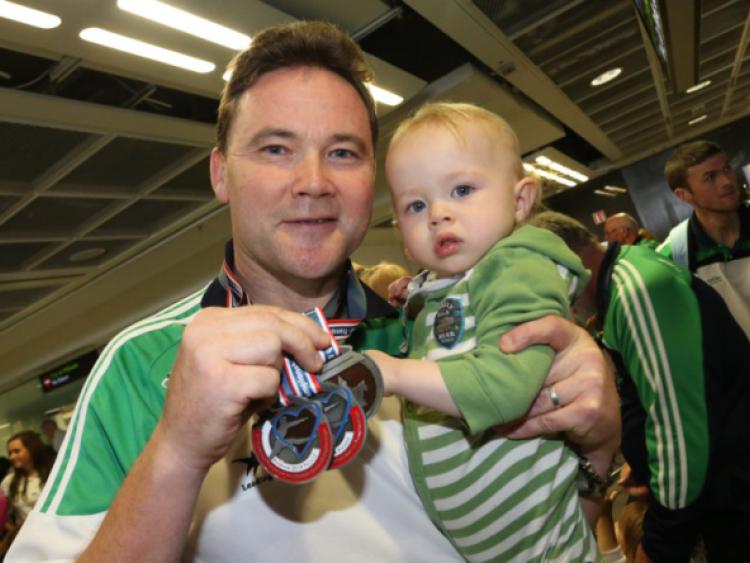 Kilcullen’s James Nolan has described himself as “exceptionally well” after he arrived home on Saturday evening, August 23, from the 8th European Transplant and Dialysis Championships in Krakow, Poland.

Kilcullen’s James Nolan has described himself as “exceptionally well” after he arrived home on Saturday evening, August 23, from the 8th European Transplant and Dialysis Championships in Krakow, Poland.

The well known butcher added to his tally of medals for Transplant & Dialysis games by two bronzes and a silver.

A veteran to transplant sport, James has competed in various European and World Transplant Competitions since receiving his kidney transplant from his sister Catherine 27 years ago.

And the multi-award winning butcher from Kilcullen has raised in excess of over €1.3 million for kidney research.

He won bronze in the Summer Biathlon, the 400 metres on the track and silver in golf.

Although a veteran of the 18 transplant games, James is once again buoyed up by the experience.

“It just gives me such an appreciation for how lucky I am. I am so lucky. I got a kidney from my sister Catherine, which was 100% match, and getting it from your family means that there’s less complications.

“I have such a high appreciation for life. Ultimately it’s the people I meet at these games. They inspire me. And it’s a reality check for me to make me realise, once again, how lucky I am.”

One man who stood out for him was Kerry’s Sean Marshall who ran in the 5km.

“When asked what his time was, he said it didn’t matter to him, because he’d been given extra time in this world.”

“It was lovely to phone my sister Catherine after to give her the good news as if it wasn’t for her I wouldn’t be here. I’m also very grateful to Tommy O’Brien from the Harbour House Gun Club and my athletics coach Kevin Walker for training me for the Games.”

James was joined in Krakow by his wife Emma, whom he describes as “the most incredible support to me in my life” and baby son Andrew James who is the “greatest little treasure that we could have”.

And in an interesting twist of fate James has been paired with his own consultant, Ron Grainger, to compete in the same handicap in the golf competition last Thursday, August 21. Ron, a kidney transplant recipient, secured gold and James securing silver.

“The Irish played brilliantly today in golf. I was chuffed to see Ron win the gold as he is a wonderful surgeon, brilliant doctor and absolute gentleman.”

Every athlete at the Games had received a kidney, liver, heart, lung, pancreas or bone marrow transplant or were are on dialysis.

There are 34 members of Transplant Team Ireland competing in the European event and they range in age from 16 to 76.

Transplant Team Ireland was ranked in the top three position on the medals table, just behind Hungary which took first place and the host country Poland in second.