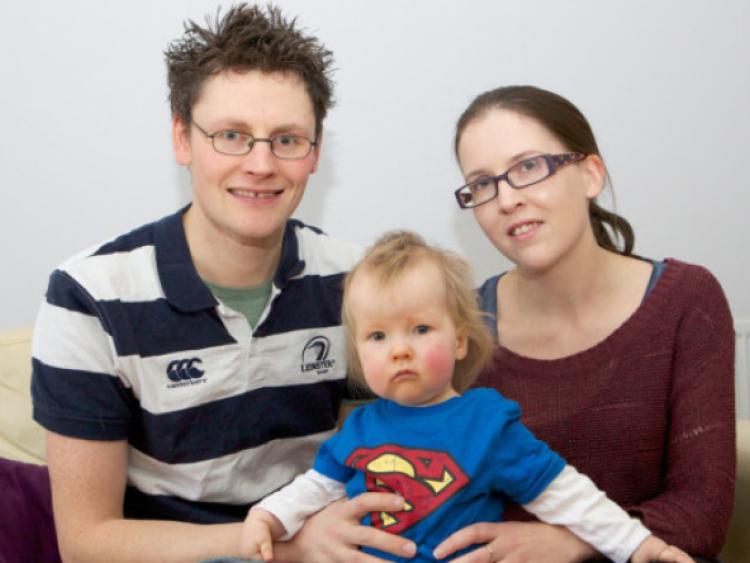 You’re in your late 20s. Three weeks ago you gave birth to your first baby, who has been in intensive care ever since and has been described by doctors as “floppy”.

You’re in your late 20s. Three weeks ago you gave birth to your first baby, who has been in intensive care ever since and has been described by doctors as “floppy”.

You’ve just been told he has a rare genetic disorder that you’ve never heard of and you don’t know anything about.

And you’ve been told not to look at Google.

Your brain scrambles like never before to process the volume of questions that assail it, but you’ve been told not to look for answers, because of what you might find.

This is the story of a smiling little boy called Henry Tierney who – 16 months later – sits on his father’s knee (both wearing matching Ireland rugby shirts) and smiles and waves at the man from the Leinster Leader.

It’s about his parents, Maynooth couple Rory and Emma, and how they’ve coped with their situation – quite admirably as it turns out. But mainly it’s about information – how much, how little, how appropriate and how to get it to the people who need it.

He’s one of only 97 children in Ireland with it.

It is characterised by a lack of muscle tone, a tendency to over-eat leading, potentially, to obesity.

There can also be an element of autism and intellectual disability in people with Prader Willi Syndrome, although it varies greatly from person to person.

Emma recounts that the first hours of his life were pretty typical for a newborn. “Then they noticed that his temperature was a bit low,” Rory explains.

He spent the first two weeks in intensive care amid fears for his blood sugar levels and a difficulty breathing.

It was also noticed that he was a “floppy” baby. He was found to have low muscle tone.

The medical staff started to suspect immediately that he was a Prader Willi baby, but held out on making a definitive diagnosis, because he was feeding by bottle as normal. This is unusual for Prader Willi babies, who usually need to be tube fed initially.

Also, the symptoms could point to four possibilities.

It requires a blood genetic test, performed in the UK, to confirm it.

The day they were informed of the diagnosis, they were waiting in the hospital when a woman came in “and asked ‘has anyone spoken to you?’,” recalls Rory.

When they were told the diagnosis, Rory says it was “like Double Dutch”.

Emma had studied genetics and had heard of it, but knew nothing about it.

“We were warned not to Google it,” Emma said.

“So Google was full of the worst case scenarios. You get all these terrible pictures from the 1970s. Very often, it’s not that bad at all!”

“I lasted a day before I looked,” Emma admits.

There were difficult days ahead, and they say you go through a grieving process of sorts.

“We kept thinking they would say they’d made a mistake,” Rory admits.

Since then Henry has been to, on average, one medical appointment a week.

There’s constant physiotherapy and occupational therapy, which helps him to move.

He’s on a very restricted diet, which is characteristic of the lives of people with Prader Willi Syndrome.

“It’s all about portion control in this house,” Emma says. “He’s never had anything unhealthy!”

He is small for his age and he arrives at various milestones slower than other babies.

His lack of muscle tone means that he gets tired quicker, which could lead to him wanting to eat more.

“So he’s always battling against himself,” Rory notes.

At the moment he has learned to roll, which can get him around, but it means that he has to be coaxed into figuring out crawling as well.

Prader Willi is all about milestones and phases. Every phase of a person’s life presents particular Prader Willi problems associated with that phase – although it’s often the teenage years that are worst, when they start to chafe against the strictness of the diet.

“The holidays are the worst,” Emma said.

“From other families, we’ve learned that Christmas isn’t so bad, because there’s toys to distract them.

“But Easter is bad, and Halloween is really bad!”

And it’s a spectrum – the effects could be mild, moderate or severe.

“We won’t know until he hits them,” Rory explains. “No two Prader Willi babies are the same. Some were tube fed for two years, but Henry didn’t need a tube.

Henry has, Emma says, only cried about 10 times in his life.

“He gets silently cross,” she explains.

He also sleeps a lot, which is something many sleep-deprived parents would probably appreciate.

“They say there is a honeymoon period for parents of Prader Willi babies,” Rory acknowledges.

This explains one reason why last Christmas Eve stands out for this family.

Henry had developer bronchiolitis, essentially a form of bronchitis that babies get.

“He was screaming,” Emma says. “I’d never heard him even cry before, so we were frantic.”

After visiting their GP earlier that day, they ended up in A&E in Tallaght Hospital.

“We told the doctor he was a Prader Willi baby,” Rory says.

“The doctor went off and came back with a notepad and said ‘Remind me of the symptoms’.

“Then he mentioned it to other medical staff who were there, and they started looking it up on Google,” says Rory.

If at this point the irony is lost on you, start reading from the top again.

The author Roald Dahl once said that a life is made up of a great number of small incidents and small number of great ones.

What happened next is one of the latter.

Henry’s parents, grandfather, uncle, godmother and several other family friends have been involved in the Galway Cycle, a fundraising event organised by students in NUI Maynooth.

On behalf of the Prader Willi Syndrome Association of Ireland (PWSAI), they pitched for funding and they were successful. The students were particularly taken with the Christmas Eve story.

For the past two years, the Galway Cycle has raised €150,000 for different charities.

For PWSAI, an organisation run from kitchen tables by volunteer families all across the country that’s not, as Rory puts it, like winning the lottery.

“To them, this is the Euromillions. This will change their lives.”

The money will go towards awareness raising generally and in particular, information and training packs for new parents who have just received a diagnosis.

It will also be tailored for people who come in contact with Prader Willi children, like doctors and teachers.

“It’ll be positive stories,” says Rory. “It’s not all doom and gloom. This will give them something to look forward to.”

And maybe then it’ll be safe to go back to Google.