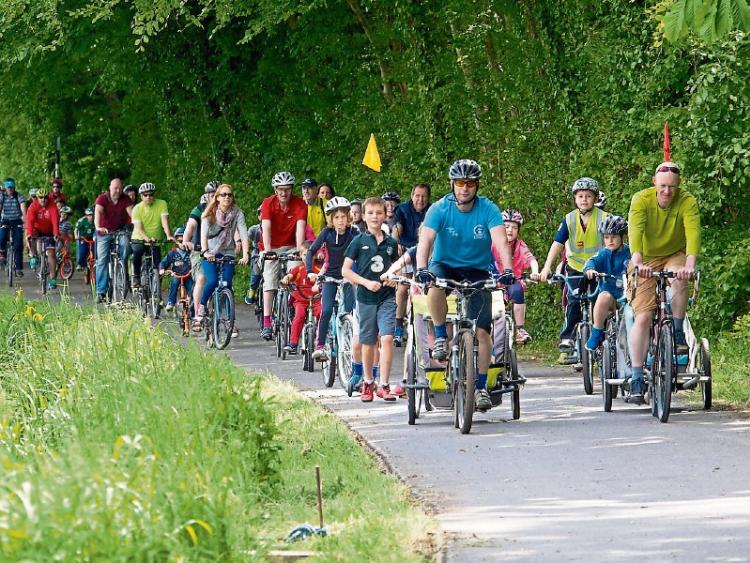 The Naas Neighbourhood Greenway has been recognised with a Sustainable Development Award from the Tidy Towns picture: tony keane

The 2016 Census told us some really interesting stuff — none more so than on the cycling battle ground.

There’s a bit of me that doesn’t like calling it a battleground for the simple reason that that tends to suggest — or worse again — inflate the notion of there being an ‘us vs them’ fight going on.

I tend to think in terms of people who have come to their senses, and those who haven’t yet. There is a quiet inevitability in the reality that cycling commuting is about to take over the world.

Here’s a nice statistic for you from the Census.

More residents of the Dublin city and suburban area use bicycles as their main mode of commuting transport than use any rail-based transport.

I kind of wish we knew also how many walked, took the bus or drove. The difference is greater in the city centre, with 34,501 resident commuters on bicycles vs 20,687 using rail.

I’m getting these stats from the rather excellent Irishcycling.com — and I’m happy to advertise that great website.

More than 82,000 people cycle every week as their main mode of transport. Of those, 56,837 are cycling to work, while the rest are going to education. According to the CSO, cycling to work saw the largest percentage increase of all the means of transport.

Here’s something else I learned on Irishcycling.com recently.

The cost of building the 6km extension to the Luas (which I think is a great idea by the way), is €368 million.

However, Dublin City Council estimates that the 100km of cycle track it is planning could cost €80 million.

Now, I don’t know how many people the Luas will carry. I’m sure it’s still way more efficient that all of those people using cars.

However, the average cycling lane can accommodate 14,000 cyclists per hour, which suggests that €80million is great value for money compared to, well, pretty much anything else.

And of course, cycle lanes don’t require an enormous amount of money to maintain, unlike roads for regular traffic. Bikes are much lighter and less likely to tear up roads.

Alas no, their love of the automobile is so absolute that they cannot see that in urban areas it is fast becoming obsolete and redundant.

I write car reviews for this newspaper, and enjoy doing it. But it’s hard to shake the impression that increasingly, in a suburban setting, cars are simply becoming comfortable and expensive places to wait for the lights to turn green.

One of the greatest innovations in the modern car is the start/stop technology, which makes the car cut out when you’re in a traffic jam. This is a good thing, because expensive enough as it is to buy the damn thing, at least you’re not spending even more money while sitting in a traffic jam.

READ MORE: My trip to the 'Wild West' was the  ultimate Irish cycling holiday

But not Kildare. We apparently, don’t need it.

On a brighter note, I’m delighted to report that the Naas Neighbourhood Greenway project got a ‘Sustainable Development Award’ from this year's Tidy Town’s awards.

While it’s nice to get the few bob associated with the award, the bigger picture is that the vision behind the Greenway, a brainchild of Naas Tidy Towns organisation, is being recognised as the far-seeing concept that it is.

I always saw it as the result of some people actually putting some thought into what they’d like the town to look like, into the nuts and bolts of what living in the town can be.

Like all of Kildare’s towns traffic congestion is a problem, especially around the delivery of children to school.

And while the delusion of more, bigger and wider roads persists in the minds of many as a solution to that problem, the Greenway aims, specifically, to potentially take most school children safely and effectively off the roads.

When that is achieved, the people of Naas may well finally come to appreciate the wisdom of cycling infrastructure — but I’ve no doubt that the usual suspects will continue to whinge and moan.