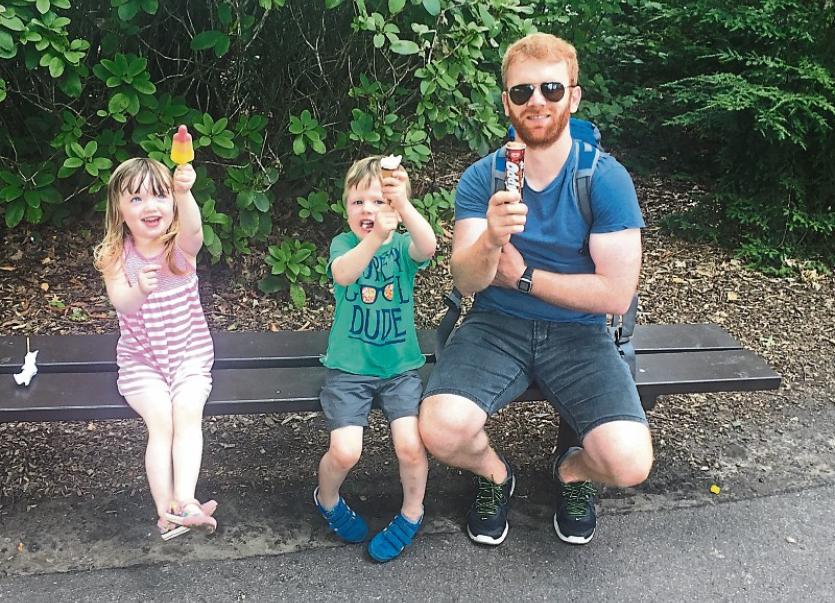 Sarah, Aidan and Daddy Chambers - he's been a 'hands on' dad since they were little

What about all the great dads out there? All the hands-on dads out there? I’m constantly hearing and seeing women moan about what their man doesn’t do. Not all men are this way inclined, don’t you know.

They are, of course, entitled to moan if their man isn’t pulling their weight at home and with the kids. However, I’m so lucky to say I’m not one of those women. Thank God! And I wouldn’t have it any other way.

Daddy Chambers is a hands on dad. Everything in our house is split 50/50. We share the load equally.

We both work full-time jobs outside the home, so we’re both incredibly busy. Why should one of us take on more of the housework or do the routine stuff with the kids?

From the minute Aidan was born, Daddy Chambers was a hands-on dad. In fact he changed his first ever nappy in The Coombe when Aidan was only a couple of hours old.

We shared the night feeds — if truth be told, he actually did more of them than I did. I don’t cope very well with anything in the middle of the night!

If I go on a night out or a night or two away with friends, he’s at home with the kids. And he never uses the term babysitting. Don’t you just hate it when men say they are babysitting their own kids? I do anyway; it drives me round the twist!

He doesn’t need help from anyone else. He cooks for them, he picks out clothes for them to wear and he takes them away for weekends in Galway to see Nanny and Grandad Chambers on their own. Now I must admit they wouldn’t be the most stylishly dressed or colour coordinated children when he gets them ready, but at least he does it, at least he make the effort.

Each to their own, and all that, but personally I wouldn’t stand for anything less. Why should I?

I think this is especially relevant where both parents are out of the house working, which is the case with us. I don’t think I’d be able to do it all on my own anyway. And speaking of keeping the house in order, he’s good at that too. Not as good as me, mind you, but he tries! I take care of the hoovering and the majority of laundry but only because I’m fussy about both.

Now don’t get me wrong. On occasions his dirty jocks end up on the floor and he’s useless at doing Sarah’s hair, but for the most part he is great around the house. A real hands-on dad, a real hands-on husband. He makes Aidan’s lunch for school probably three out of the five days, cleans up after dinner most evenings and emptying the dishwasher is his forte!

He has no qualms about scrubbing the toilets, making beds or tidying up the playroom. He even takes notions sometimes and hoovers all the dust of the skirting boards, something I would never think of doing! I hate dusting.

And research even suggests that kids with hands-on fathers are better behaved.

If you don’t believe me, do a Google search on it!

I have a good man; a great man. And I count my blessings. If I had a fella that left me to do it all, I think I’d have a nervous breakdown! Either that or we’d be divorced!

Life is hectic enough as it is! So to Daddy Chambers, you are a gem. So too are all the other hands-on men. To the ones that are not — sort yourselves out, will you! It’s time to make your arrival in to the 21st century! Start pulling your weight!

Newbridge mum Ruth writes the weekly 'It's Just A Phase' column in the Leinster Leader.