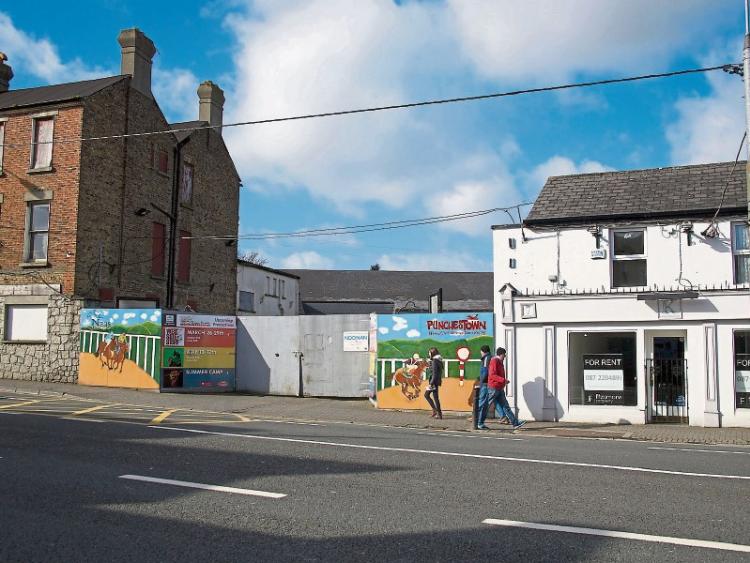 It's still known as 'Superquinn' 'round these parts...

I GOT caught some columns back calling Fairgreen Street in Naas, New Row. It was quite the surprise that I’d been applying the wrong name to this location for years.

And of course New Row starts at Murtagh’s Corner and runs out the Limerick Road. Or is it the Newbridge Road?

And Murtagh’s Corner is where One New Row is located now. But if any local called it ‘One New Row corner’ they’d be hauled off down the army barracks on the Newbridge/Limerick Road and shot.

Just in keeping with this theme of confusing names — the army barracks was once where Kildare County Council now stands.

Only the place I still refer to as ‘the council’ is up past the hospital and across the road from Lakelands.

The upshot of all this is that my incorrect identification of Fairgreen Street as New Row got me thinking about local landmarks that have assumed their own names as well as other landmarks still referred to by outdated names that only a local would know.

There is absolutely nothing about this old building at the bottom of Millbrook that could give a stranger a clue it was once a bustling ballroom.

And nor does any name remain enscribed on the building to identify it as belonging to the Lawlor family.

But everyone of a certain age and above still refers to it by a title that hasn’t existed as an address for decades. Even though it would still be considered a world famous location by some ageing revellers who once visited from far flung parts of the country.

On the ordnance survey map Hedderman’s Bridge or ‘Hill’ is just an extension of Friary Road arcing from Poplar Square to the Blessington Road. But locally it’s known after the coal
merchant that once traded heavy bags of anthracite below its looping arch, and by doing so gave it it’s official — or unofficial name.

Maybe this will change when the old building in the centre of town is renewed as something else, but so fixed is this space as a geographic reference point in people’s consciousness that if you were new in town, you’d be forgiven for thinking there’s this supermarket still thriving in the middle of the Main Street.

One of the town’s great summer sports’ stadia won’t be found on any map either.

But the grassy hollow separating the estate of Kings Furze from Woodlands is another unofficially named local landmark that’s instantly identifiable to a generation.

Not to be mistaken with Naas GAA down the Sallin’s Road. ‘The Gah’ as a point of geographic reference will always be between Naas Industrial Estate and Naas Racecourse on the Dublin Road. In local lingo ‘Down the Gah,’ or ‘by the Gah’ is a very definite set of of longitudinal coordinates located some distance from the new playing pitches on the Sallins Road.

There might be a generation gap with this one, but possibly a younger generation have projected this location into the echelons of local unofficial landmarks.

The sombrero-shaped patch of land by the canal’s edge beyond Abbey Bridge was a vital staging post for hundreds, maybe thousands of underage drinkers, down the years. Maybe, it still is!

Where once there were bomb dives and lessons with May Leonard, now there is only grassy green after the famed Deep End was filled in with tonnes of top soil.

Only,I still hear the site where it once stood being referenced as ‘The Swimming Pool and similarly the Fire Station around the corner that’s now St David’s Boxing Club.

Where all the confusion and double meaning started — on the corner of the erm, Newbridge or Limerick Road by the traffic lights.

I first remember it as Finan’s and never thought to ask why everyone called it Murtagh’s. In this short list it’s probably the most official, unofficial location, in the town.

*Please email any other organically named unofficial locations in Naas or Kildare to mulhernrobert@hotmail.com.

READ MORE MULHERN: In from the cold: my time on the trail of the Soviet spies in Ireland