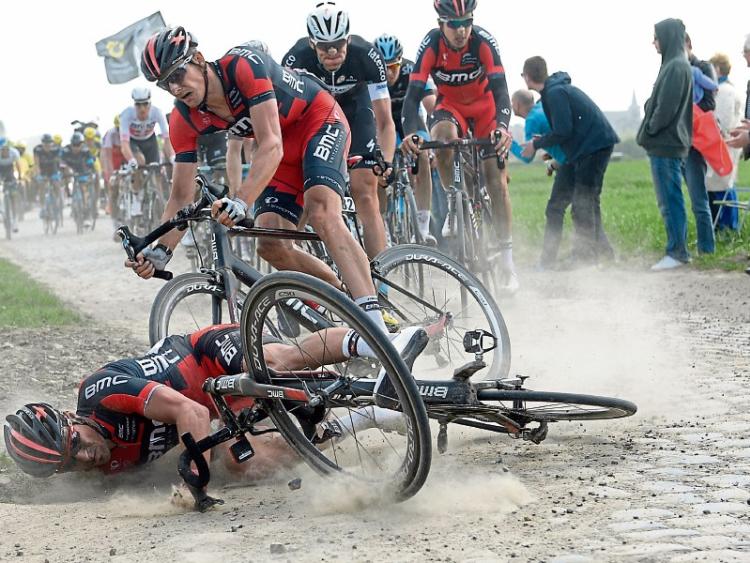 Kildare's roads are mostly better than the cobbles of Paris Roubaix

Ihad been writing a column in my head for some time — something sarcastic along the lines of how the owners of the Paris Roubaix race had considered branching out into Kildare to create a similar type event.

They had visited, according to my sarcastic article, looking for the legendary terrible roads of Kildare to add a bit of flavour and intrigue, something that would push the mechanics and manufacturers to come up with equipment that would never fail.

They wanted to make sure that only a hard man, a Sean Kelly, Tom Boonen type would win it, covered in muck, with his clothes hanging off and blood flowing from some heroic looking scar.

However, the article would conclude, the owners of the legendary race, with its umpteen cobbled sections, gave up on the idea after finding that Kildare’s back roads were, in fact, far too bad, way way worse than the Forest of Arenberg.

That particular article had been written incrementally in my head over a few years, every time I had ventured off the Timahoe to Donadea road towards the townland of Mucklon and over to Dunfierth Cross.

That road is known for a couple of things — John Gilligan’s house and equestrian centre, Jessbrook is on the right, although according to the Criminal Assets Bureau, neither the house nor the equestrian centre belong to Mr Gilligan any more.

But for the common cyclists, the road was known for the shocking state of the road surface. And of course, that’s what my long planned piece was going to be about.

But then, damn them anyway, last week I headed over there, despite the state of the surface. I often use it because it is that most delightful of things for the cyclist — it’s quiet and bendy.

And lo and behold, for the first time in as long as I’ve been driving or cycling that road (at least 10 years) the surface at Jessbrook has been fixed.

My joy at discovering this was only mildly greater than the disappointment of realising that I wouldn’t be in a position to write what by then had turned into a particularly biting piece on the general state of the roads.

I have long marvelled at the fact that Meath County Council were apparently able to keep their boreens and back roads in good shape, something Kildare County Council has singularly failed to do over the past half decade.

But in recent weeks and months, they’ve been on a tarring and resurfacing spree — and, credit where credit is due, numerous roads around the north and north west of the county are now an utter joy to behold.

I'm reminded of the assertion by Liam Kenny who used to write a wonderful history column in this publication that Kildare's boreeens are as essential and fundamental an element of the county as the parade ring at Punchestown.

Now I won't try to compete with silver-tongued Kenny but I will assert, in my own way, (and I will be inflicting my assertions on the newly appointed boss of Kildare Failte, Rathangan woman Aine Mangan), that the boreens of Kildare are an absolute treasure trove, a playground for cyclists and walkers.

They are full of the most wonderful beauties, artefacts and more than the occasional eccentric, and if kept well paved, can be promoted and marketed as a goldmine for cycling tourism.