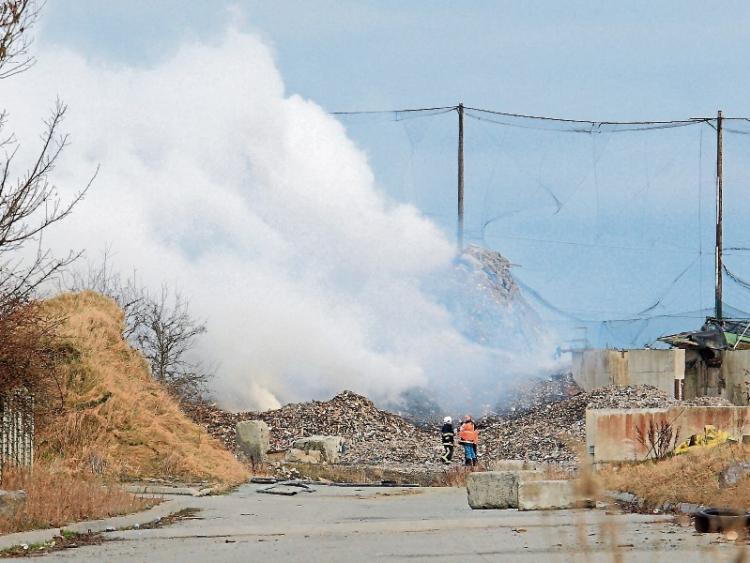 It’s a far cry now from the near apocalyptic scenes of early 2011, which threatened a pollution incident in the greater Naas area.

Kildare County Council is going through a bureaucratic process which involves the purchase of land, a planning application to An Bord Pleanala and a licence application to the Environmental Protection Agency — all with the aim of creating a public park with play/sports areas at the former Kerdiffstown landfill site.

All of the bureaucratic hoops must be jumped through eeven if there was little evidence of enforcement of rules and requirements when the dumping at Kerdiffstown took place without regulation or control, certainly in the final days.

The Kerdiffstown landfill site was a notorious dump a few years back.

A heavy rotten egg odour came from it and could be detected far from Naas, and some families were evacuated from their homes.

It soon emerged that fires were burning at extremely high temperatures within very high mounds of rubbish. Expertise was summoned from abroad to deal with the emergency — and it was an emergency.

These fires were not visible and some were located by the use of thermal imaging.

The dump, described as the most complained about “facility” of its type, in Ireland was closed by a court order.

The taxpayer, as usual, footed the multi million euro bill.

The company was not represented in court. A
Jenzsoph Ltd., is among the parties listed in KCC’s compulsory purchase order document and for which lands are being “permanently
acquired.”

To be fair to the parties involved, all of the damage done has been undone, albeit at considerable cost.

The creation of a public park will also cost at least €30m.

But most would agree that in an area where the population is going to expand this a very worthwhile project.

KCC has had control of the site since June 2015 by which time it was clear that little or no environmental damage has been caused.

The issues to be tackled included the control of emissions such as smell, dust, surface water, groundwater and gas created by waste within the landfill.

Leachate, a nasty liquid created as rainfall passes through waste, has been taken out by the tanker load and safely disposed of.

KCC will retain ownership of the park and will have overall responsibility for managing and maintaining it.

Apart from ensuring that the site is pollution free and that not waterways including the Morell River will remain pollution free, the project has taken into account other developments such as the filling of a quarry at Kerdiffstown, the M7 upgrade (including the Osberstown interchange and the Sallins Bypass), the planned (currently withdrawn) Applegreen service station in Naas, housing development in Osberstown and upgrades to sewage and waste treatment plants.

In the place of a dump there will now will be cycle paths, walkways, playing pitches, running areas.

There will be a car park which can accommodate buses and an overflow car park.

Some 200 vehicles can be accommodated.

There will also be four changing rooms and public toilets as well as store rooms bicycle parking and betting to keep footballs in the playing area along with lighting.

KCC is overseing a fairy tale ending to what could have become semething else entirely.