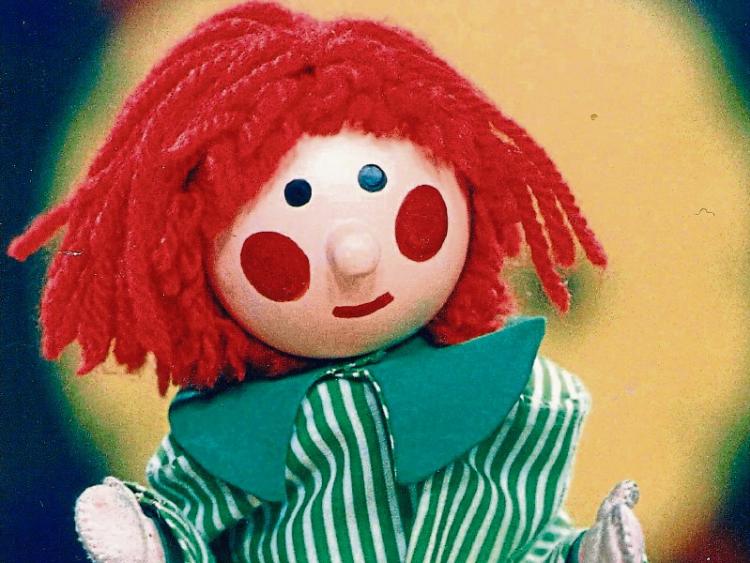 The year 1982 is the first year I can really remember anything. People were saying it was the worst snow for God-knows-how-long and it must have been bad because it was taller than any of us under the age of five could stand.

The road past the hospital up to Ballycane was like a Sniper’s Alley with snowball hurling youths waiting in
ambush on both sides of the road.

And this was the era of Bosco, only no one really used Bosco as a puppet. It was much better to swing him about by the trousers and turn his heavy wooden head into a deadly dangerous weapon.

A few years later, Brendan Grace started freeing Nippers, which were a lot more child friendly, and they’d the release stickers in the service station across from Rathasker Heights on the Kilcullen Road.

Somehow I ended up with the pink one, instead of the Gorilla.

It was the year of the Triple Crown and Conor Cullen from down the road was big into the rugby and he looked a bit like the Ireland’s Ginger McLoughlin, who everyone was talking about in 1982.

Red hair, red cheeks and with a white headband, that’s Ginger now! He scored that try against the English in Twickenham and we watched re-run after re-run of him being bundled over the line and scattering the English in every direction.

Conor could have done the same, I reckoned.

So Ireland and Ollie Campbell won the Triple Crown and Northern Ireland were in the World Cup in Spain. Only it didn’t feel like anyone was shouting for them.

The Kellys up the next cul de sac were from the North but the only visible support for a team from the other side of the border was when their cousins arrived down wearing headbands, plaited red and white, and I think they were Tyrone.

On the radio Alison Moyet was singing Only You. Dexies Midnight Runners were shouting Come on Eileen and this band called Tears for Fears were saying the world had gone mad.

They speak now about the Orange Revolution in the Ukraine in 2005 but in 1982, there was a mini-orange revolution in Naas.

It arrived via Donegal. That’s where Willie McNeilus was from.

He used to jog by the house in all weathers and coach the local soccer team, when he stopped.

A few years later we’d be attempting Cruyff turns down the Caragh Road and Brian Cooper could pull off a neat one.

READ MORE: The Curragh should be our Burren or Titanic quarter

But back in 1982, someone called to house and mentioned a local man who was causing a lot of trouble up in Dublin.

On the news these names kept popping up again and again, Charlie Haughey and Garret Fitzgerald but the man he was talking about was from Sallins.

Soon after Charlie McCreevey was temporarily expelled from the Fianna Fail party.

In the All Ireland, Kerry were going for five in a row and the Byrnes down the end of the road must have been a house divided, because the late, great Bill Byrne had some strong connections with Offaly while the young lads were hardcore Kerry.

That Seamus Darby goal must have sparked a riot across the border in Edenderry.

And someone invented the video. Screen Test opened on the Dublin road and you could get Tron and Conan the Barbarian and ET Only they were short on copies of ET because for all sorts of reasons like people getting stuck in (pre-bypass) traffic, and not dropping the copies back in time.

In the fashion stakes, Naas main street was a scatter of leg warmers, just like the ones people were jumping about in in this show wired in from New York. Fame, with its images of the Bronx and all these beautiful women dancing about, was magnetic.

It’s too early to call it a sexual awakening, being not yet five, but thousands of miles away from New York, in Naas we were captivated.

And the only way we could watch it properly was if we stood directly in front of the TV and stuck our faces to within six inches of the screen.

Everyone down the bottom end of the town then was preparing for school in Ballycane and the reputation of the principal, Miss Kennelly, felt kind of similar to that enjoyed by Margaret Thatcher, the then Prime Minister in England.

Formidable is a word I couldn’t have understood then, but that was it.

The Brits were off to the Falklands and looking back now, it kind of felt that we were readying to go to war too.