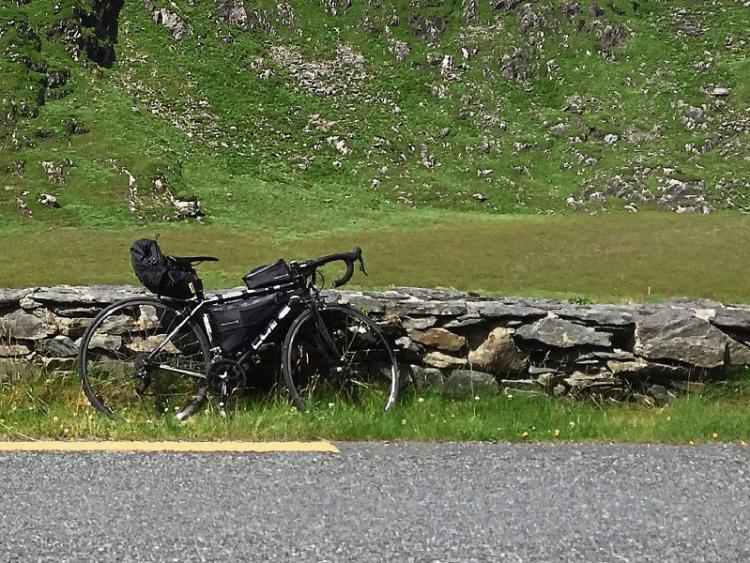 The trusty steed at Moll's Gap

Two weeks ago I had what is probably the ultimate cyclist’s holiday. Over the course of nine days, from Saturday, July 8, to Sunday, July 17, a gang of five of us cycled the Wild Atlantic Way.

Admittedly, it wasn’t strictly always the WAW, for a variety of reasons — there are for instance, places worth seeing that are a couple of kilometres inland, for instance.

We started on the morning of July 8 by getting the train to Sligo. A lot of trains will take your bikes and a lot will have a limit on the number of bikes they can take, so be careful to check that before you depart. In any event, we were lucky to have somebody with a van who could transport the bikes and bags etc to Sligo while we got the train.

The first day of cycling was from Sligo to Foxford with a gentle introductory 76.7 kms. It was a gentle stroll through very rural Sligo countryside — through the likes of Aclare and Cloonacool.

The second day was one of the best days on the bike — it’s just a pity it was wet for most of it.

We went across the Windy Gap and Pontoon into Newport, before taking the Greenway down to Westport — which is never a chore.

From there we headed out the coast road to Louisburgh in driving rain, which was a bit of a chore. But that was all banished once we took a left in the town and headed out over the mountains and descended into the beautiful Delphi, and further down into Leennane, where we stayed in the incomparable Maam Valley.

The total distance for the day was 111kms.

The third day brought us out of Leennane and Killary Harbour. Once out onto the road to Clifden we turned right off the main road and headed out to the beautiful Tully Cross and back into Letterfrack. (I should say, turning off the main road should be your defining principle if you’re touring.)

We had a brief stop in Clifden before heading out to the beautiful Roundstone.

The total distance that day was 77kms, which is just as well, because the following day, going down to Galway city and out to the lovely town of Kinvara, was a long 117kms, the last 20 of which I felt keenly!

That being said, we were lucky in that our landlord from the B&B in Roundstone had directed us to a beautiful bog road that had the dual effect of shaving off a few miles and giving us fantastic scenery of the mountains in the background.

Day five was the first time I’d ever seen County Clare in sunshine. Anytime I’ve ever been there before it was shrouded in dark clouds and rain. And it was stunning.

We headed down the coast and up the famous Corkscrewhill, into Lisdoonvarna and Doolin and back around via Liscannor and Lahinch before settling down for the night in Kilrush.

There was plenty of climbing and descending, one of which I obviously prefer!

Day six involved a detour to pick up a friend who was joining us for the last few days. We crossed the Shannon on the ferry at Tarbert and headed for lunch in Foynes.

One of the lads had inputted the entire route into his Garmin, which brought us to interesting places, and some tiny tiny roads with grass down the middle.

And that’s how we got across to Listowel and eventually Tralee for the night.

That was 102.5kms for the day, made slightly more difficult because of a stiff head wind — although the 60kph descent into Tralee is one that will live long in the memory!

Day seven was not the longest — only 91.5kms, but it was certainly the toughest, with Dingle’s Connor Pass in the middle of it.

That was the toughest climb I’ve ever done. The addition of the extra weight with the bags on the back of the bike made things tough, but I wouldn’t have minded that so much if the wind wasn’t in our faces the whole way.

The higher we climbed, the more it howled.

So strong was it that on the 6.4 km descent I only averaged 41kph and hit a maximum briefly of 52kph.

After that, we dropped our bags off in the B&B in Dingle before heading out around Slea Head loop, which was easily one of the highlights of the whole trip, with considerably lighter bikes!

Day eight was another long one. It was 102 kms and, in short, brought us out of the Dingle Penninsula, into Killarney and over Moll’s Gap into Templenoe where we stayed for the night.

I had thought I was familiar with all of the ways up and down Moll’s Gap, but once again the Garmin found a quiet and scenic road with grass down the middle that delivered us almost into the middle of Templenoe.

That day saw us exceed 1,000 metres of climbing — although strangely enough it was probably the most enjoyable from a climbing point of view.

The final day was simply a matter of getting back over Moll’s Gap and into Killarney.

I had been looking forward to the descent, but every Sunday driver in Kerry was in front of me and I spent most of the time on the brakes, saying extremely unkind things about them.

I had somehow gotten it into my head that the train from Killarney would stop in every little station along the way.

Alas, we didn’t spare the horses from Thurles to Heuston so a 45km spin awaited me to get home, bringing my total to 876 kms for the week.

As proof of the training benefits of a week touring, I broke three Strava PBs on the way home, which is impressive on a winter hack bike that’s weighed down with bags.

Overall, our week touring the west of Ireland was a brilliant holiday, a brilliant way to see the country and a brilliant cycling adventure. I couldn’t recommend it enough.