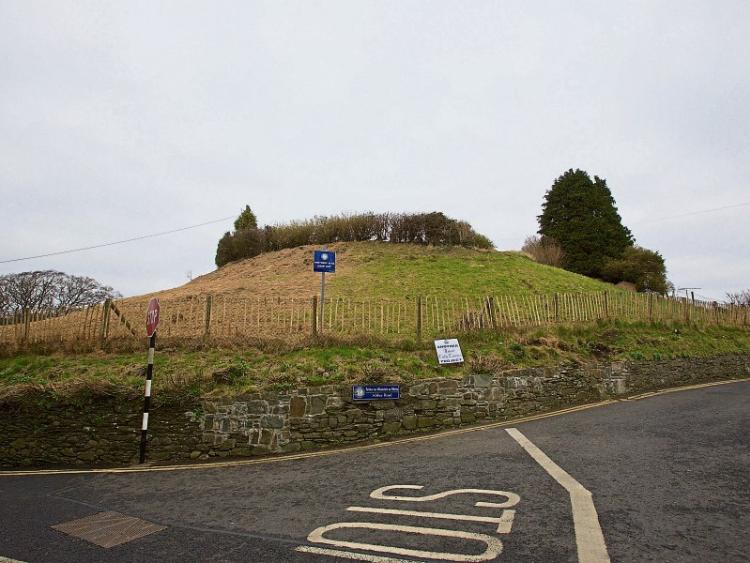 The Moat Hill where the goddess, Nás is reported to be buried. Photos: Tony Keane

By Simon TuiteNaas resident and Director of Monumental Ireland

There is a long held, yet somewhat mistaken belief that Nás na Riogh is the original Irish name for the town of Naas.

It is thought to mean ‘assembly’ or ‘meeting place’ of the kings. There is in fact no word ‘nás’ in the modern or archaic Irish language with this meaning.

However, the place-name Nás goes right back to our earliest written histories and the mythological age of Ireland. It is associated with Lugh, Celtic Sun-God and king of the Tuatha dé Dannan, one of the most important figures in Irish Mythology.

Like many ancient Irish deities, Lugh had several wives, including “the modest” Nás. According to the legend, she was a mythological queen or goddess, who died and was buried at the place named after her (Naas).

“(Nás)… claims of right the brow and the beauty of the spot, since she is gone, with the noise of combat, how should ye know at all the spot where she died?

“Nás took in hand a deed unwise: (truth and not folly) death o’erwhelmed her; ‘tis from her Nás was named, famous perpetually for stern law.

“Nás of the Leinstermen, bright with splendid bounty, ‘tis there the lady was buried; from her it is called with clear certitude: the lore of the ancient hides not this.”

Dún Nás, known today as The Moat Hill, is traditionally thought to be the final resting place of Nás. Some accounts say she was buried there on the spot where she died. Others say Lugh buried her on the hill so she could be closer to the sun god himself. Dún Nás is even referred to in the ‘Annals of the Four Masters’ dating from the year 705 AD. There are many other examples of the of the place-name Nás in early Irish literature.

On the few occasions that a longer form of the town-name was written in early Irish literature, Nás Laighean (Naas of Leinster) was used rather than Nás na Ríogh (Naas of the Kings), the first recorded reference of which is not until 1650. Even then, it was used only as a descriptive title, in reference to the ancient seat of the Leinster kings, once based in the town. There are also recorded examples of the town-name as it was referred to by native Irish speakers as late as the 18th century, when it is still referred to as Nás.

With the gaelic revival of the late 19th and early 20th century, the name, Nás na Ríogh, was recommended in a gazetteer of postal-towns published in 1905, along with the older Nás Laighean, and a variant of the original name, An Nás. This variant has no prior references in Irish literature.

I am putting forward this information, not by way of a lesson in history or folklore, but rather to provide some context to the motion on which the current custodians of our towns heritage (the Naas Town Council), have put forward. That is, whether to change the official Irish name of the town from An Nás to Nás na Riogh.

Let us not lose the ancient name given to this town on the misguided belief that Nás na Riogh is the original Irish name. Or that somehow, its royal associations may be of benefit to the town. If anything, we should return to its original Irish name, Nás. In honour of the ancient goddess from whom it was named. As the Dindshenchas states…

“Nás… ‘tis there the lady was buried; from her it is called with clear certitude: the lore of the ancient hides not this.”

Simon Tuite is a Naas resident and Director of Monumental Ireland