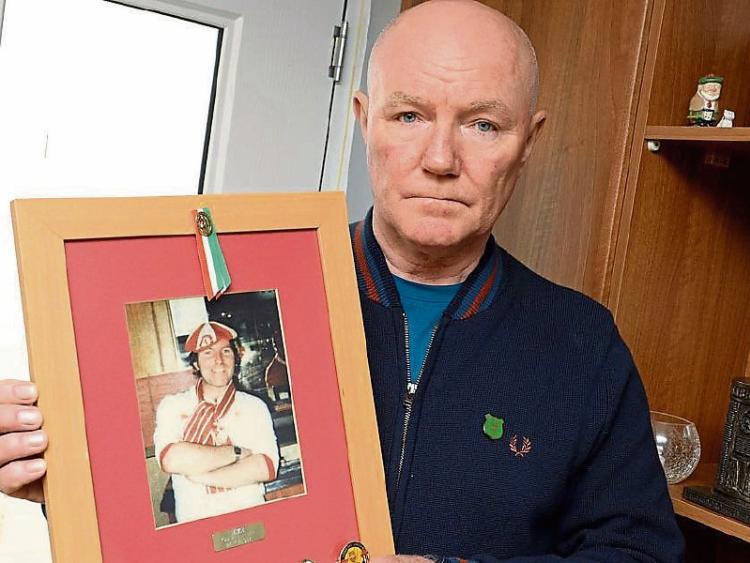 Steve Kelly, with a photograph of his brother, the late Mick

It felt like half of Naas followed Liverpool in 1989. I was a supporter then too and vividly remember hearing that something had happened at Sheffield Wednesday without really understanding the news reports on television.

Hillsborough and the Justice campaign has been a constant on the news cycle ever since, and support for Liverpool FC in Kildare always made it topical. But it was only when I interviewed Steve Kelly in London, in 2009, that I really understood the human impact of the disaster and was struck by all the Irish names among the dead: Gilhooley, Clark, Brady, Whelan, O’Neill, Murray, McDonnell, McCarthy, and Mick Kelly — Steve’s brother.

Steve and Mick’s parents Patrick and Jean came from Ballycumber in Offaly and emigrated to England. I’ve spoken to Steve Kelly many times over nine years. His story was impossible to forget and he always cited the importance of support and coverage of his story from Irish sources.

This is an archive interview with Steve Kelly, which took place prior to the recent decision to prosecute six people and South Yorkshire Police in relation to the disaster.

“It’s always starts to build up around Christmas then when April comes around it feels like another funeral,” says Steve Kelly.

“The 10th anniversary of Hillsborough was a heavy one for me but coming up to the 20th, well it felt like my head was going to explode.

“The coverage in the Press was so massive and there were so many people ringing saying they were thinking about me, but I just felt like I wanted to be left alone.

READ MORE: It's time to give back to Kildare sporting great Adrian Melia

“When the day of the 20th memorial came, I was dreading it but when it was over, I was just so proud of being a scouser — the response we got from everyone was really overwhelming.

“I was working as a taxi driver in Liverpool at the time of Hillsborough and was working that night. We were picking up fans and councilling them really, just trying to help them out, get them home.

“I knew Mick was at the game but I just thought, well he’s a big lad and an experienced football fan, he’ll be alright.

“When I got home, my wife had left a note saying there was still no word of Mick. I thought he’s probably off somewhere having a pint and getting his head together.

“I went to bed but woke with a bolt at seven the next morning. I just knew something was wrong.

“I rang the police and they told me all the dead had been identified. I rang my family and told them what the police had said but there was still no word so we kept ringing and getting the same answer.

“I put out an appeal on local radio for news about Mike and then drove to Sheffield. I parked my car outside the Lepping’s Lane gates at Hillsborough and a police officer told me to move the car. I told him no, my brother’s missing and I have to find him. The police said all the dead had been identified, but I went in to where the bodies were and God help him, there he was.

“I wanted to go in and see him but the police said ‘he was the property of the coroner.’ I said ‘he’s my f****n brother.’

“After that I had to ring my family and tell them, I mean how do you tell your mum?

“In the days and weeks after Mick’s death, if someone from the police had come and knocked on my door and said they opened the gates and it was their mistake I would’ve understood.

“I’m sure they (the police) didn’t know what hit them that day, but they tried to blame someone else and that’s the part that really hurts.

“When the police did come to my house they had a video of the tragedy. They said they wanted me to watch it, wanted me to try and pick out Mick in the crowd.

“They said it was necessary so nothing like it would happen again. I couldn’t believe they were asking me to do this.

“I said I wouldn’t do it. I couldn’t face seeing my brother dying again. But I was told if I didn’t then they’d ask my mother to watch it so I had to.

“Even today, I can’t look at the old TV coverage. Seeing people be stretchered off on the advertisement boards, I get beside myself thinking, could that have been Mick?

In the years since his brother’s death, Steve has lost both his mother and his sister to cancer, he believes that Mick’s death accelerated and contributed to their deterioration.

“My mum was ill with cancer at the time and Michael’s death took an awful lot out of her. A few years later my sister Joan (sister) developed cancer, I didn’t know it, but she’d sooner go to a Hillsborough meeting than go for treatment — that’s how she felt.

“I just want to be able to go to their graves and tell them that that those who were killed weren’t drunk or causing any trouble that day, they were just going to a football match and this terrible thing happened.”

In the years that have followed South Yorkshire police tried to deflect the blame of Hillsborough onto Liverpool supporters, who they claimed arrived late to the Lepping’s Lane end of the ground, under the influence of alcohol and without tickets.

In his official report, now known as The Taylor Report, Lord Justice Taylor criticised the police for their role that day and for trying to deflect blame onto Liverpool supporters.

But it took until last week for the wheels of justice to turn.

“I thought after the 20th anniversary, people are starting to realise what really happened in Hillsborough. All I’d received then was a letter from the coroner’s office saying how Mick died. I’ve never got anything saying who was culpable for what happened.

“Someone made a point during the week, that if the disaster had happened in Wimbledon or Ascot then the families wouldn’t be sweating for answers.

“I know the police who were working that day didn’t expect that to happen when they woke up that morning, but they tried to bury what happened.

“I think of Mick, he was 38 at the time, a quiet guy and a big music fan. Obviously he was massive Reds fan too. He was living in Bristol at that time, working nights with a freight company and would often visit home after Liverpool matches.

“On the day of the disaster he wasn’t missed. The lads he came up with thought he’d made his own way back to Liverpool like he usually did, but he never did make it back. For Mick to rest in peace, I just need someone to say it’s our fault and we’re sorry. Then I can go to my mum and my sister’s grave and tell them.

“Then I can start getting on with my life.”

Robert Mulhern is a London-based journalist contracted to RTE's Doc On One. To contact our columnist, email mulhernrobert@hotmail.com.