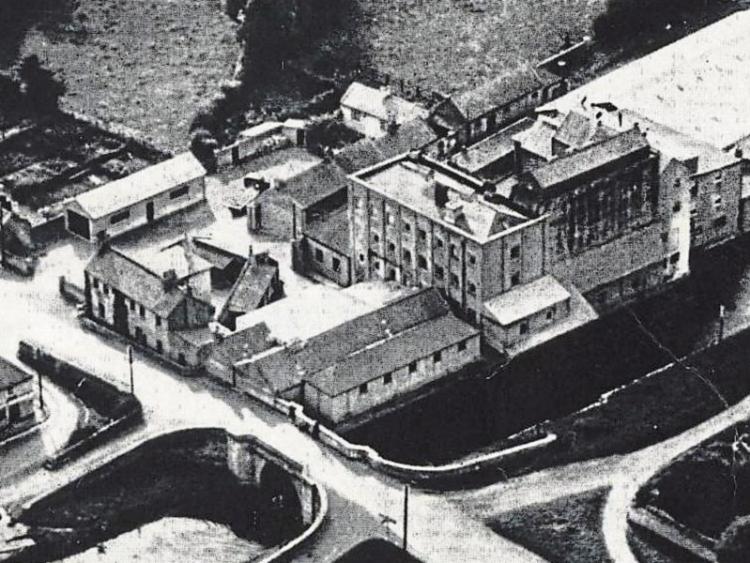 A photo of Odlum's Mill in Sallins taken aroun d1950

An outbreak of fire badly gutted a small mill, known as Friar’s Mill and used by Messrs W P and R Odlum, in the early hours of Tuesday morning last, the Leinster Leader reported on 3 May, 1942.

The mills, which are situated of the Sallins Road, just outside Naas, have not been in full production for a number of years and was utilised principally about once a week to execute small contracts for local farmers.

The outbreak was discovered at about 3am by Dr William McCarthy, Co MOH, Kildare, who resides a short distance from the scene and who immediately got in touch by phone with the Gardai authorities. The LSF fire-fighting squad were immediately notified and with the manual equipment, promptly reached the outbreak. Mr Louis Doyle was in charge of the Urban Council’s fire-fighting equipment and Mr Wm O’Brien, water supervisor, was also at the scene.

A line of hose was very expeditiously laid on from the available hydrant and a steady stream of water was directed upon the flames which had by this time completely enveloped the main building.

It was soon realised that nothing could save this structure and attention was directed to prevent the spread of the fire to the adjoining stores and the private residence of Mr Michael Browne.

In this purpose the fire fighters succeeded admirably and when military from the Naas Barracks arrived a bucket chain was formed from a nearby stream and still further lessened the danger. The motor trailer pump operated by the LSF another brought by the military from the Curragh Camp gave valuable assistance, and the combined efforts of all had the effect of confining the fire to the main building and bringing the outbreak under control.