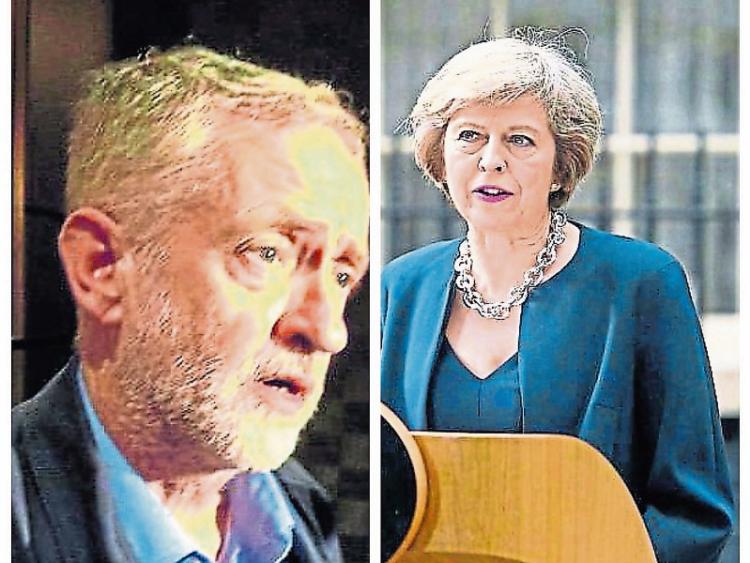 Jeremy Corbyn and Theresa May

I spent an hour in a south London park two weeks ago harassing strangers. It’s okay, it was daylight, I was holding a microphone and asking dog walkers if they were voting Corbyn or May, or maybe the Lib Dems or the Greens “and what about UKIP? They’ve lost their ‘oomph’ now Farage has gone, haven’t they?”

It was raining and I had to stop recording when the sound of plane engines flew overhead.

We were beneath the southern flightpath to Gatwick, so that meant stopping about every two minutes.

And because Crystal Palace is a ‘safe’ Labour seat, finding a willing Tory voter felt nigh on impossible.

This mattered. Not because I’m a an unshakeably fair journalist — which of course I am! — but because the BBC won’t pay for anything that doesn’t contain both sides of an election argument.

ROBERT MULHERN: It's time to give back to Kildare sporting great Adrian Melia

On the freelance beat of British politics has never been glamorous, and amid looming deadlines, editor’s orders and the constant feeling that if the WiFi in whatever cafe I’m in fails, I’m f**ked, well, you’d be thinking there must be easier ways to earn a living.

And that’s not forgetting fractious arguments with interviewees, being told to piss off occasionally, and having election reports, that take hours to make, pulled from the airwaves when a so-called sexier story comes along.

In 2015, I got a false introduction to covering the UK general election when RTÉ asked for some reaction from a polling station. Any polling station, they said!

Of all the luck there was one in the church right across the road from where I was living.

I’d already met, Ray who ran the pop-up cafe inside the church, and he told me who was who coming in and out.

It was all done by the time the first edition of the Evening Standard hit the streets.

I’ve never hit a 147 in snooker but surely, this is what it feels like.

During the Labour leadership contest in 2015, I remembering travelling more than 200 miles to get two minutes with Jeremy Corbyn. And even then, I had to compete with a bowl of chips he was eating.

I’ve been put out of Stamford Bridge for not being ‘Champions League accredited’, but being told where and where not to stand outside a polling station in Chelsea during Brexit was a whole different level of nonsense.

Only a Tory supervisor could take the term Queen’s Highway so literally.

There’s been missed slots on a BBC Northern Ireland breakfast show because the producer forgot to call, with just the compensation of a £25 disturbance fee, and only last week the hard drive on my Apple Mac died, just as the Corbyn campaign was springing to life.

And whatever it is about this election, I’m getting better and better at finding people who don’t want to talk — particularly around ‘the City’ of London where a polite hello can bring a withering dismissal that bounces you like a pinball down the street.

On weeks like these I thank God for the smokers — the only stationary people in London, idle enough and immobile enough to surrender two minutes of their time to talk about the Coalition of Chaos, or Stable May-ble.

I must have nabbed every inner city smoker from Canon Street to Cornhill.

And after I finish this column I’m going to make my 73rd attempt (it feels like that) to find a polling expert who will allow me to convince them to leave their comfortable desk and travel all the way from Central London, to Tooting in the west of the city, to talk about trends in a pub that only serves tea.

It’s a real long shot. But if it comes off, it will be that 147 feeling all over again.

Maybe I should tell him I’m rooting for Jeremy Corbyn to make it a 50:50 gamble.

They’re not bad odds, considering JC was around 70:30 against just a few weeks ago.