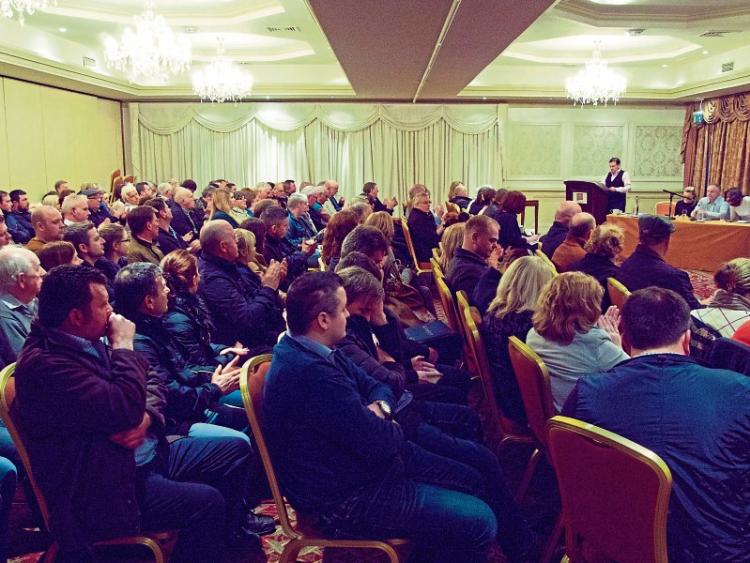 A view of the recent rates meeting in the Clanard Court Hotel, Athy. Photo: Tony Keane

When I was slightly younger than I am now, about 50 years ago, a lot of folk tended to call the the school subject of maths by a simpler name — sums. It has been a while now since I heard the word ‘sums’ but I was reminded of it in recent weeks.

Maths, or sums, appear to be at the core of so many of the issues which are making the headlines now.

I was reading a story about how the State has calculated deprivation indexes to tell them how best or how fairly to transfer extra money to the so-called Deis schools. But it appears that despite all the talk of “transparency” there was also talk of data protection when it came to the data published in the indexes.

An issue we have now is that we cannot create the best level playing field possible without knowing what is in everyone’s bank
accounts. And for many people, that is a ‘no no’ elephant in the room.

Nearly every political debate ultimately boils down to the maths. That’s what Brexit is really about.

I happen to believe that the international debate about tax avoidance and evasion in the world, in which capital flows much more easily that it might have done in the past, is more important than Brexit.

Brexit was voted for because of growing inequality in Britain, which has led the way in market-based economic thinking — although some would argue that socialism for the rich has been a big factor in that.

I would hazard a guess that many of those wanting to leave the European Union could be doing so because they don’t want to share the riches that the peace time economies and assets/work of the general population has enabled them to earn. Some may have much of that wealth in tax havens.

When I attended public meetings on commercial rates in recent days, a lot of the questions asked were related to how the Valuation Office calculate rent and value of a property.

As a former economics student, I do not pretend that is easy to answer. I suspect the officials will be doing their best to be fair. But when people are struggling — and some will be struggling far more than others — the questions are going to be asked.

In many areas of life these days, you will be asked to provide an audit trail or show how you came up with the formula which you are proposing. But when the debates are boiled down to the maths, the economists are often divided, ideologically or mathematically.

In February, I asked the Rental Tenancies Board how the average rent was being calculated after complaints that Maynooth was not included in the list of Rent Pressure Zones — which are zones where rents are rising very fast.

I was not given printouts of the econometric calculations which they used. I had asked for them as I have some basic knowledge of econometrics from my university studies.

Despite the fact that the Rental Tenancies Board published rent figures on its site, the calculation of the average rent was done differently by the ESRI based on data only available to it.

There needs to be a more transparency in formulae, if only so that those not-so-well endowed with mathematical or scientific abilities can hire someone with expertise to campaign on their behalf.

Commenting on the rates meetings recently, Kildare South TD, Martin Heydon, said appeals based on sentiment alone will not carry much weight.

“Appeals should be backed up by evidence and facts as much as possible,” he said.

But the maths need to be clear too.