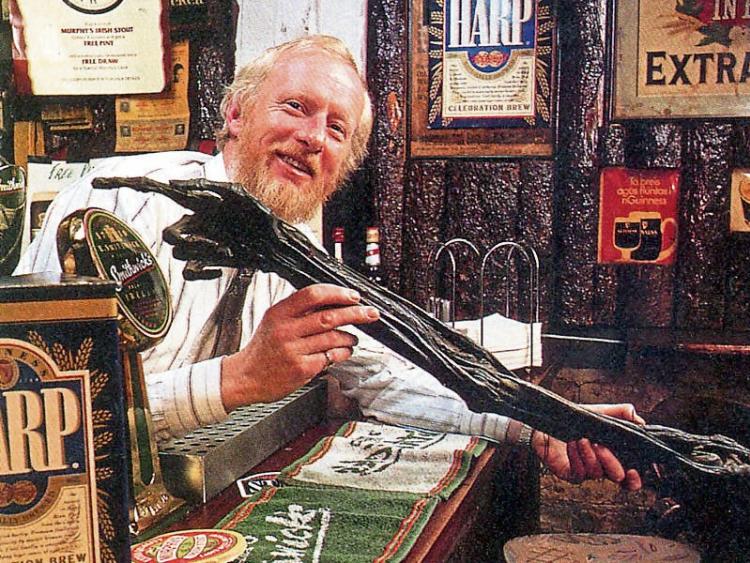 The late Des Byrne, formerly of The Hideout, Kilcullen, with the famed Dan Donnelly's arm

The Hill of Allen appears a handful of times on an aerial video of Kildare’s landscape, by Paul Brereton, which features on the features section of the Leinster Leader’s website.

And the Liffey, and a selection of old church steeples but what about the aqueduct on the way to Digby Bridge, the Five Crossroads out the back of Kilcullen or even the site of the old Kildare Chilling on the way into Kildare Town?

Here’s an alternative selection of what the camera missed.

You’re familiar with the episode of Father Ted when gravity is reversed and Jack rolls up the hill on the Magic Road instead of down?

They might look like easy jogging terrain from above, but try putting one foot in front of the other when pitted against a strong headwind, and you’ll recognise that weird feeling of the things moving farther away not closer.

The sight of sheep chronically over-rested and flaked out by the roadside must have landed like a cruel irony for those suffering at mile 124.

It was built for bloodstock, but for me it’s always been about billiards.

Steve Davis, Stephen Hendry, Cliff Thorburn, Willie Thorne, Ray Reardon, Ken Doherty, Alex Higgins, Denis Taylor. They all chalked their cue on the opposite side of the duel carriageway to Kill in the 1980s and 90s.

Legend has it though the best frames of snooker in the Kildare were played out the back of Prosperous in Ronnie Wood’s place when Ronnie O’Sullivan and Jimmy White visited out of season.

Only last week a Galway man in London enquired about the Hideout and the current whereabouts of Dan Donnelly’s arm!

Everyone of a certain vintage in Kildare and beyond, it seems, knows the pub and its location. The place was run by the late Des Byrne and his wife. Never has a building so well known been so inappropriately named.

It’s curious now to think that Bill Clinton used to hold-up out there and Tiger Woods went fishing in the place. So the story goes, the one about an aimless golfer who hit off into heavy rough on a hole that skirted the banks of the Liffey. And when the wayward player went to retrieve his ball, he discovered Tiger Woods tying a fly to a hook and getting set to cast-off. This was before his back problems.

In some ways, Manzor’s falls into the same category as the Hideout in that it achieved landmark status because of length of service and its location close to an important junction.

The old Murtagh’s Corner in Naas was another of this ilk. Ditto, Johnson’s in Newbridge and the old Silken Thomas in Kildare Town. None had the selling point of a limb framed on the wall though.

If someone was talking about Roman influence in Kildare in the eighties I would have guessed they were referring to Luigi’s chipper in Monasterevin, not the Aqueduct out the back of Sallins.

We used to cycle out to where the canal bridged the Liffey and jump in, knowing nothing of the architectural excellence that went into building our summer swimming pool.

I’d love someone to take a drone shot of the Five Crossroads from the air. From street level it always feels like a bit of a puzzle to try and figure out how five roads could cross a quiet intersection in the middle of nowhere, and why a fifth road was needed anyway?

Not to be mistaken for the long established but less famous 9th century cross of huge historic importance. South Kildare’s famous inn achieved notoriety by pulling off a neat marketing move in the 1980s when the owners pitched up a series of signs advertising the hostelry at 100 yard intervals on the road to Athy.

Clint Eastwood stopped by on one occasion.

Maybe he did make the old cross, walking off the breakfast.