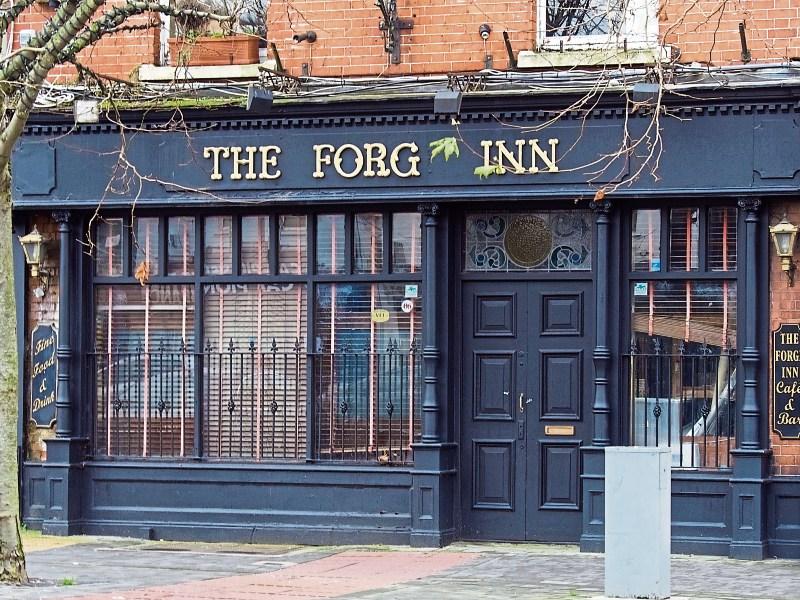 The Forge Inn, Naas, is one of a number of closed buildings not listed as derelict by Kildare County Council

The Naas Tidy Towns group has — in a sense — been doing more to open new business enterprises in the town than any other organisation.

Its volunteers took to painting some of the vacant premises in the town, in advance of the annual Tidy Towns competition. And so good has this work been that more than a few passers-by believe that the businesses had reopened.

There are several empty business premises on the main street in Naas and many other towns. There always have been but the economic collapse washed up many more and they act as physical reminders of false hope and unfulfilled ambition.

And they don’t look great and neither do they present an attractive image. Certainly not in Naas, a town with many fine historic buildings.

Many calls have been made for action to be taken against the owners of these myriad buildings and often these calls do not take account of the ability of the owner to do the necessary work.

It is clear that Kildare County Council takes something of a softly approach to this issue and it’s also clear there are good reasons for this.

A derelict site is generally defined as land which detracts or is likely to detract to a material degree from the amenity, character of appearance of land in the neighbourhood of the land in question.

The site must have structures which are in a ruinous, derelict or dangerous condition or be neglected or unsightly. A site can also be derelict if litter, rubbish, debris or waste is present (except where this is lawful).

The law allows KCC to issue notices to whoever owns or occupies the site. These notices can effectively request improvement or simply inform the owner that the site will be placed on the register. In some instances a levy is due to
the council.

A recent report prepared by KCC indicate there were a total of 54 sites on the Derelict Sites Register but 34 of these properties were removed following contact with the relevant owners or occupiers, which resulted in works of improvements.

The derelict sites issue became particularly pronounced, say KCC, in the post Celtic Tiger period. Sites “which had possibly been bought for possibly inflated prices” were not now economically viable to develop.

The problem was compounded by the fact that many owners went into liquidation or receivership.

In 2009 KCC began a comprehensive trawl to identify and address the derelict properties.

Some 400 properties have been reviewed since then. The typical issues associated with the sites include the state of neglect of the general environment, litter or dumping, graffiti and anti-social behaviour.

KCC acknowledges that the presence of a derelict property is more than a mere physical structure - it can have a negative effect on the sense of the community and cohesion in an area.

It also clear that many of the owners may not have the means to do all of the work that should, ideally, be done.

In an ideal world there’d be no derelict buildings; so KCC’s priority is to work with the owners to try to improve the sites or develop them, secure them or just clean ‘em up.

And KCC has found that this is working satisfactorily. A more hard-nosed strategy would not succeed.