Remembering World Cups and Euros past from a Naas perspective 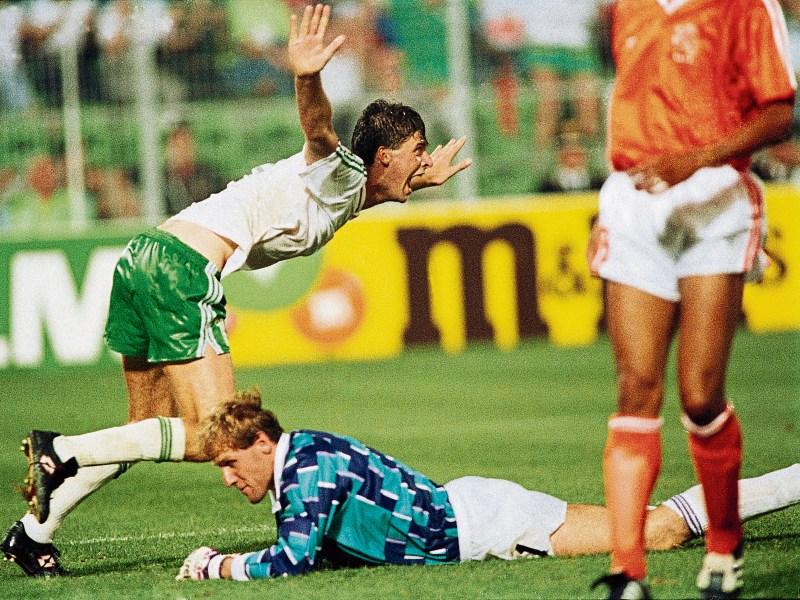 From stickers to liquor, Robert Mulhern looks back at tournaments of old...

It was a blistering hot Sunday afternoon in Stuttgart for Ireland versus England, and Kildare. A fishing trip down the canal had been organised but it was pulled by lunchtime.

This was the era of the Panini soccer sticker albums so we knew the English players as well as we knew the Irish ones. Kenny Samson, Gary Stevens, Bryan Robson, Peter Beardsley, Gary Lineker — they were faces that lived on the counter in newsagents like Lanes and shops like Conway Behans.

The stickers were the information bridge of their time, and a Shoot Magazine from Dillons. It was a pull-the-curtains-to-keep-the-sun-out kind of a day and Big Jack kept rubbing his head under the sun in Stuttgart.

Then Houghton’s goal went in and Christy Moore put paper to pen out Moorefield way. I can’t remember when his hit Joxer, made the charts but the soundtrack of the summer was Belinda Carlisle, Def Leppard and Michael Jackson. It became the tournament of Ruud Gullit, Marco Van Basten and Frank Rijkaard for Holland.

MacGyver and Magnum PI were on the telly.

The county was awash with branded World Cup T-shirts, shorts and socks from Dunne’s Stores. It was like a bad clothes explosion with Spitting Image style sketches of the Irish team printed onto every garment. It was sticker heaven again down in the Supermarket section.

Coke were running adhesive pen pics of the Irish team on all their one and two-litre bottles. You didn’t really have to buy the bottles to get the stickers.

It was an overcast weekday afternoon when Dave O’Leary scored the winning penalty against Romania and the main street was a scene of wild celebrations. We ran the gauntlet in the car. Up, down and out the sunroof. Then up and down some more. And all to a cacophony of deafening horn beeping. Waving scarves and flags needed to be held fast or they’d be lost to the clutches of passing punters stumbling out of Finan’s.

It was Italy in the quarter-finals and there was mumbles down the back of St David’s Church that his holiness, Pope John Paul II, was somehow in our debt after the Irish team led by Charlie O’Leary paid a visit to the Vatican. Schillachi made a bollox of all that when he pinged home Packie Bonner’s parry from a Roberto Donadoni pile-driver. Afterwards the other Charlie, Charlie Haughey tried when he walked Nero-like onto the pitch in Rome’s Olympic Stadium.

A promise to boycott the Italian run Capri Grill lasted about a week. The musical spectrum ran from MC Hammer to Nessun Dorma.

I’ve two abiding memories of this tournament, Jack Charlton and John Aldridge getting in a row with FIFA officials on the sidelines against Mexico in Orlando, and dozens celebrating the win against Italy by dancing on the roof of a Bus Eireann coach outside the Post Office.

Ireland lined up against Italy with a much heralded midfield, anchored by Andy Townsend, Roy Keane and Houghton. Naas lined up in the Five Lamps. We had yet to grow out of the free gimmick phase. Every pint of Carlsberg yielded a suction sticker suitable for the back window of your car.

Houghton scored again but Paul McGrath was heroic. Years later, I was stunned to see him in the Bauhaus and stunned again when someone asked would he run back through that performance one more time?

Back on the Friday night in 94, the town was manic.

Aerosmith (Crazy), Crash Test Dummies (Mmmmm mmmm) and Ace of Base (Sign) were playing on the radio.

There were nearly killings as the town divided into pro and anti Keane camps but the matches were equally memorable. T

he opening game against Cameroon took place shortly after sunrise on a Saturday morning and many decided to try and go through the night only to flounder into a deep slumber soon after kick-off.

The pubs couldn’t get a pass to open so early but Spain in the quarter-finals was a sunday morning kick-off that just made the opening times watershed.

I watched the Germany match in Hayden’s. When Niall Quinn nodded down to Robbie Keane who blasted past Olivier Khan to score, beer flew, everywhere. Quinn would see out that summer with a move to Eadestown but not before Brazil brought down the curtain on the tournament.

That coincided with High Chaparral winning the derby over in the Curragh.

Eminem was playing on the radio.