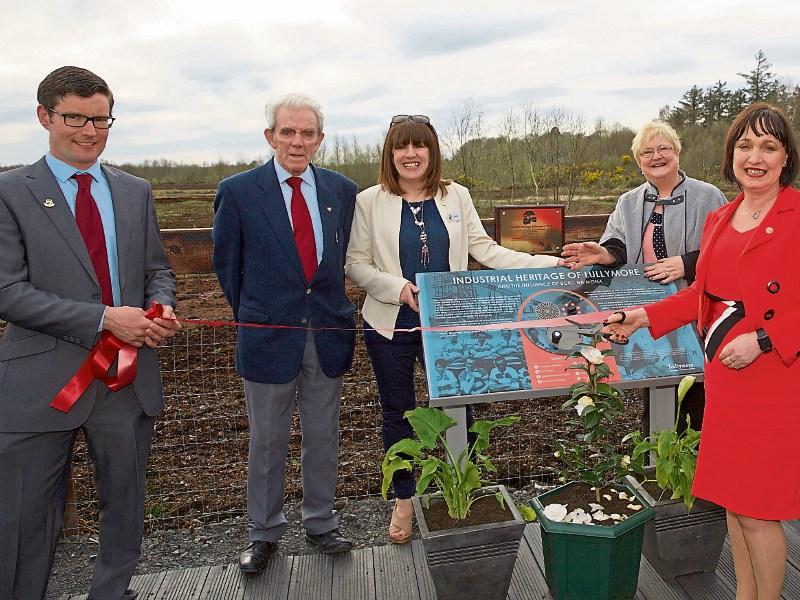 A historic site in west Kildare is believed to be 8,000 years old, an exciting new archaeological survey has revealed.

It’s likely a prehistoric ceremonial site was based at Lullymore monastery prior to 512 AD, the year it was first recorded in the annals.

Archaeologist Cóilín Ó Drisceoil said all the evidence, including the existence of wooden trackways, some dating back 8,000 years, suggests the monks reoccupied an existing Neolithic bronze age site.

“This is internationally significant what has been found here. It’s really important to archaeologists. I am really glad to say the results of the survey have been stunning,” he said.

Speaking at the launch at Lullymore Heritage and Discovery Park on Thursday April 21, he pointed out there are only about 50 such sites in Ireland.

By using magnetic and resistance techniques, he was also been able to pin point the location of the underground foundations of the stone church, stone huts, the kilns, the metal work area and burial grounds. One of the wooden tracks had previously been identified as one of the oldest in Europe. The monastery was located where Lullymore graveyard is today.

The archaeologist also found there were ditches on the inner side of the two enclosure boundaries, which also suggested the settlement was older than previously thought.

Coilín paid tribute to the graveyard committee for their upkeep of the site and the Doyle family, custodians of the burial ground, who allowed him unrestricted access.

“I am just flabbergasted by the community spirit that exists here in Lullymore,” he added.

A large crowd turned out for the event, which also saw the opening of the park’s boardwalk extension and new signage.

Drehid grant funding was provided for the survey, and also contributed towards the boardwalk extension.

Newly elected TD, Fiona O’Loughlin performed the official opening while Fr. Gerard O’Byrne blessed the site and made special reference to the late Sean Judge who founded the park.

O’Loughlin also paid tribute to Sean pointing out his wife Geraldine and the staff could take inspiration from his vision and tenacity.

Deputy O’Loughlin said coming to Lullymore was like coming home, as she had grown up just up the road.

Johnny Judge said it was very fitting the park was able to show the results of the graveyard survey.

“The fact that Sean now rests in this ancient site, which the Lullymore Poet referred to as the ‘Angels seat’ seems right to me,” he said.

Geraldine made a presentation to the new TD and thanked Bord na Mona, Kildare County Council, Cóilín Ó Drisceoil from Kilkenny Archaeology and the Doyle family. She said the survey was a joint initiative between the park and Lullymore Graveyard Committee.

“Today is all about community and what can be achieved by working together,” she said.

“From very ancient times to a monastery, which provided seclusion and safety to monks for a thousand years, a hiding place and training camp for rebels in 1798, to more recent times when Lullymore was central to an industrial and social revolution for a young Irish Republic with the Turf development board and later with Bord na Mona. This is all of our story and we are the best people to tell it,” he said.

Sean O’Donoghue said he had been involved in the graveyard committee for 30 years and welcomed the results of the survey, which was backed by the committee and the park. He thanked Bord na Mona, KCC, and the Doyle family. He praised Johnny Judge, Geraldine, Ray and Helen for their enthusiasm. New exhibits are currently being installed under the Ancient East initiative and will be launched soon.