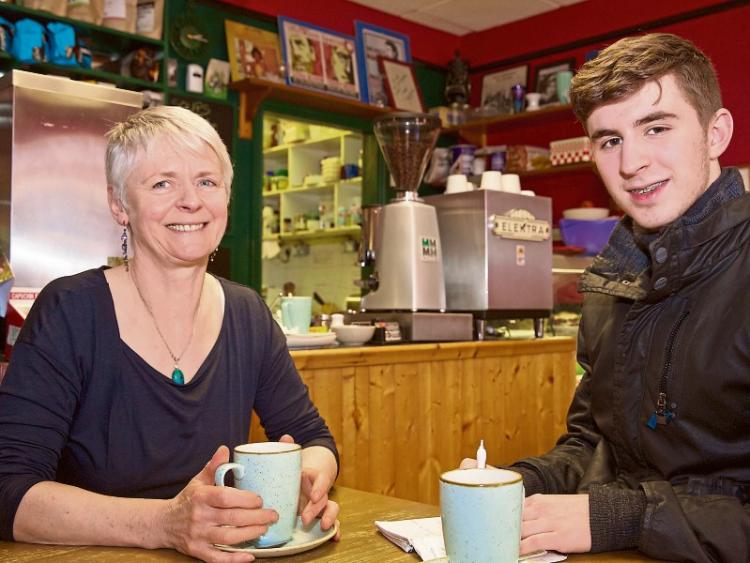 If you were told that 29 businesses in Naas offer service 'as Gaeilge' how would you react?

As an Irish speaker myself my curiosity was immediately piqued; how was it that for all this time I was unaware of this? I had to know more.

Last year saw the start of Cill Dara Le Gaeilge, a scheme dedicated to promoting the Irish Language through business in Kildare. I decided to go and pay a few of the businesses listed on their website a visit to get a feel what they’ve actually done.

I started off at Swans on the Green (or MacSuaine ar an Bhfaiche if you like) where I was told that their designated Gaeilgeoir was not at work today so I quickly moved on to Fairgreen’s Pharmacy where I received a less than favourable review of the program. When I informed them that they were listed on the scheme’s website they seemed surprised and I’m not even sure they knew exactly what I was talking about when I first came in. Aine Kane and Emma Storrie told me how they felt the scheme was poorly implemented and not enough support was received from the organization (the last time they were in contact was over a year ago) and they also said they themselves didn’t take it too seriously.

I was somewhat discouraged, but I still had places to visit. My next stop was Alice’s Restaurant where I had the most uplifting encounter, speaking to Eibhlín Ní Chearbhaill.

The Irish language has played a role in Alice’s since long before Cill Dara le Gaeilge started, and according to Eibhlín it began with an encounter with an old friend of her father’s who used to visit to speak Irish.

Eibhlín put it down to “not so much Cill Dara le Gaeilge but word of mouth” and the fact that they already used the language that the restaurant has acquired a name for itself amongst the local gaeilgeoirí (She says Alice’s might have inspired the scheme).

Every Saturday between around 11am and noon a group of Irish speakers meet up at the restaurant to eat and talk while their children run around and enjoy themselves trí Gaeilge, playing games like cleas na bacóide (The significantly less catchy irish translation of hopscotch).

After leaving Alice’s I popped into O’Reilly’s pharmacy, where I spoke with Brian O’Reilly about his involvement in the scheme.

A jolly man who is fond of a good laugh, Mr O’Reilly told me how he had always thrown in a few words of Irish here and there “for the craic” and he came to support the scheme when a customer overheard him and asked if he’d take part.

However unlike Alice’s the language is not something he has really seen in practical use too often, he himself only has a cúpla focal.

But that’s not to say that a cúpla focal isn’t a selling point. A small number do visit the store repeatedly and try out a few words, a Dia duit and a Conas atá tú here and there and this is especially important to Naas’s rapidly growing Irish speaking youth; in the wise words of Mr O’Reilly it gives them a chance to “Put life into the language”.

Richie Whelan Menswear was next on the list, where I had a short but informative chat with Mr Whelan, he also informed me that CillDara le Gaeilge was great for customer relations but far from game-changing.

I then stopped by Sweet Quarters and Emporium Kalu where I heard much of the same.

In the end I came to the conclusion that there is no cultural Renaissance happening in Naas (it’s not about to become a neo-Gaeltacht) and of all the businesses I spoke with only Alice’s actually offered service through Irish, but there is a love and support here for our language that you might be hard pressed to find in another community or town and that is certainly a cause to be proud.