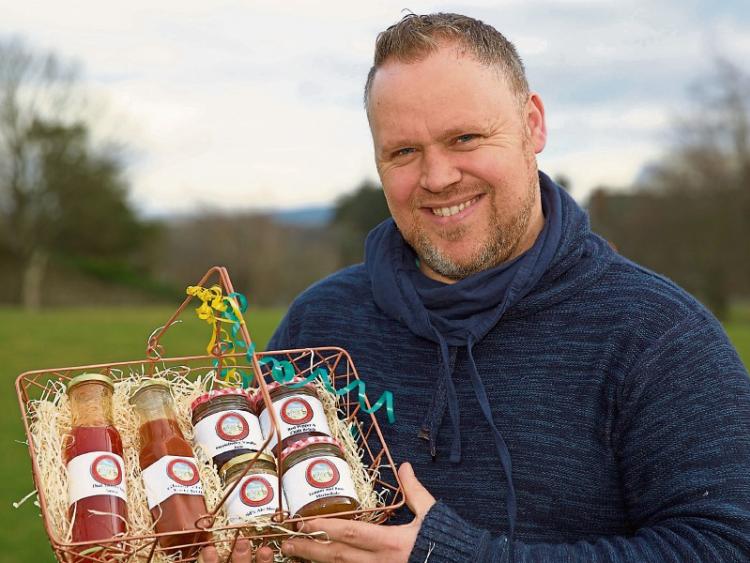 You could easily look at Bernard Gibney’s previous work history and conclude that it has nothing whatsoever to do with his current gig.

So, working in horticulture in Ireland and in Germany and for several years in the Ted Baker boutique in Kildare Village makes perfect sense then, doesn’t it?

Well, actually, it does.

But first, lets go back to the beginning. Gibney is a friendly 30-something from Kildare town blessed with an over abundance of the gift of the gab, and an ability to learn and soak up ideas and tastes.

He has a very early recollection of his grandfather “who had huge shovel hands” bringing him to the end of the garden to show him, at the age of three, his vegetable patch.

When he was a bit older he loved to cook, introducing Italian and Mexican flavours into the family at a time when such things were more exotic than they’re considered now.

After school, he went to worka at Johnstown Garden Centre where he worked for four years, and followed that up with a year in Holland and five years in Germany, again working in horticulture.

Along the way he picked up tastes and flavours from those countries, which had a greater array of ingredients and a broader culinary landscape than Ireland at the time.

It probably sems odd to anybody under the age of 25, but the array of food and ingredients you’ll encounter as you walk through the aisles of your local Tesco or Supervalu now are a million miles away from what we had at the turn of the Millennium and before.

Something else he learned in Germany, unsurprisingly, was efficiency – how to make sure that every action you took was the most efficient as you did.

“I was literally followed around by a Time and Motion man, building efficiencies into everything I did.”

He arrived home in 2004 got married and, realising that the table required food, “blagged my way into a job in” a surfing shop in Kildare Village.

Next door was the boutique Ted Baker, and after seeing him in action, they decided to headhunt him. He worked there from 2008 to 2013 when he says he simply fell out of love with it and left.

“I was in a managerial position and I was getting older whereas the staff were all staying the same age.

At the same time he had been making small batches of relishes for friends and family as presents, and getting great reviews.

One day, on the spur of the moment, he handed in his notice to Ted Baker. He had €240 in his bank account at the time and the mortgage needed to be paid at the end of the month.

He says he has a very patient wife who is used to his impulsive ways!

So with €240 in the bank he traipsed around from car boot to car boot sale, where he quickly sold out everything he’d made.

“It was also a great place to conduct market research – and I managed to cover the mortgage!”

The one thing he’d learned in Ted Baker was the psychology of selling.

So he started to find ways to tell his story, to get into the consciousness of his customers, real and potential.

His insistance that all ingredients were all locally sourced (very often just picked from the gardens of neighbours) has resonated with people.

And he was making his relishes and jams in his own kitchen, although he also has the use of a commercial sized kitchen.

This reporter first encountered him in the beginning of February at a “Brigid’s Bounty” event in Boyle’s pub in Kildare town.

There, Susan and Judy Boyle (Leinster Leader beer columnists) were hosting a tastings of their brew Brigid’s Ale.

And as part of the Brigid’s Bounty theme, Bernard produced a box of jars of mustard which, he said, he had made with Brigid’s Ale.

He had been attracted to the ale because it had honey in it, all locally sourced.

“This is me all over!” he tells me some weeks late.

He’s constantly thinking of, or hearing of a taste, and wondering how it would go in a jam or relish or mustard.

Another element to his craft is his obsession with Victorian era cookery books. He loves resurrecting old recipes, and even adding a modern twist.

In fact he has 32 different products and has no intention of stopping. With his German efficiency he can produce 400 jars a day.

Now trading as Gibney’s Garden Jams, the mortgage no longer keeps him awake at night.

Nevin Maguire and Nolan’s Butchers are among the many who’re happy to sell his products – and he still turns up at farmer’s markets.

And he’s won London’s Great Taste awards and the Irish Blas na hEireann, which in this business, is as good as it gets. Clearly, he can produce it and equally clearly, he can sell it. It’s looking good.

You’d have to presume his future is bright.