Newbridge girl on the grid 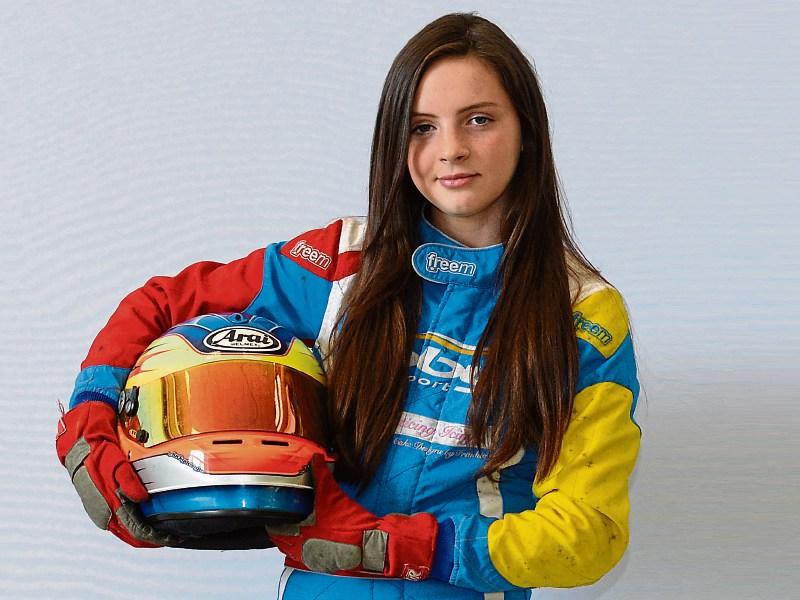 This is no ordinary girl. The fifth class Gaelscoil Chill Dara pupil will be spending her weekends on the race track trying to outmanoeuvre 19 other drivers (all male aged up to 16 years of age) at speeds up to 100 km per hour.

This doesn't phase the Newbridge girl, in fact you get the sense that she thrives on it.

“I enjoy it a lot. I am the only girl and it's great to be able to show that girls can do the sport too. I love the idea of driving. It's so much fun and the people around you are amazing.”

“We are sworn enemies once we get on the racetrack but when we are off it, we all get on really well.”

A major step up, the Newbridge girl is embarking on her first full season in the IAME X30 Junior class after enjoying three years in the Cadet class.

The IAME X30 Junior class caters for drivers up to the age of 16, with Alyx being the youngest taking part. With a 125cc IAME engine, experts say these karts can reach speeds of up to 100km/h.

Unphased by the move, Alyx has spent the winter tackling test sessions as well as taking part in club races around the country. The kart is bigger and more powerful than the Cadet specification.

Alyx admits she struggled for the first few races over the winter as it takes a lot more effort to get through the corners and her arms were really sore after long runs. However, she stressed she is getting used to it and has been doing extra training to build up her strength.

“It's hard to get the time but I have recently taken up Karate and train four nights a week to try to improve my fitness and I’m really enjoying it.”

When asked what her aim is for this season, the talented driver said she is still trying to adjust to the change.

“My dad says I am doing really well and am good enough to finish in the top five,” she adds.

Last season was her most successful to date, becoming the first female driver to win a national final at Cadet level in Ireland. She went on to win a total of three finals and set six fastest laps. Midway through the season she was in second place in the Championship, just three points off the leader, but a growth spurt over the summer resulted in her being too tall for the kart, making it difficult to be competitive in the latter half of the season. Despite this her tenacious spirit saw her finish fifth in the Championship - one of only three drivers to win more than one race in the season.

This year, the prize on offer to the top five finishers is a trip to Le Mans in France to compete in the IAME World Karting Finals in October. Alyx went to watch her uncle Aaron compete last year and hopes to be able to race there herself this year.

The Motorsport Ireland Karting Championship consists of 18 races over nine weekends from March until the end of September and visits counties Antrim, Cork, Galway, Louth and Meath.

Alyx's mum, Frankie and her dad Gary are super proud of their young daughter's achievements. Her love of racing comes from her dad, who was a very successful driver in his own right, and now tutors up and coming talent. Aaron still races in the IAME X30 Senior class. Alyx says that her dad is her hero and she even races under the same number 99. When asked what kind of reaction she gets in school, Alyx said; “most of my friends used to think it was really silly but then they saw me on the websites and read about it, they realised it was really good.”

The closest track where Alyx gets to compete is in Meath so her friends don't get to see her in action. However, the Coby family are huge supporters, packing up and heading off every weekend.

“My brother (Reyce 19) doesn't get to go that much but when I come home, he always gives me a big hug and says 'well done'. My little brother (Christian 2) loves it.”

It's no surprise that Alyx's ultimate ambition is to be a Formula One driver. Sebastian Vettel is her favourite, although Louis Hamilton is an excellent driver, she believes he is 'a bit full of himself'. If her success comes down to sheer determination and talent, Alyx won't be found wanting.

A formidable force with an unbridled sense of fun and love of driving, fear is not an option for this youngster.