Looking Back: Bombers over Newbridge 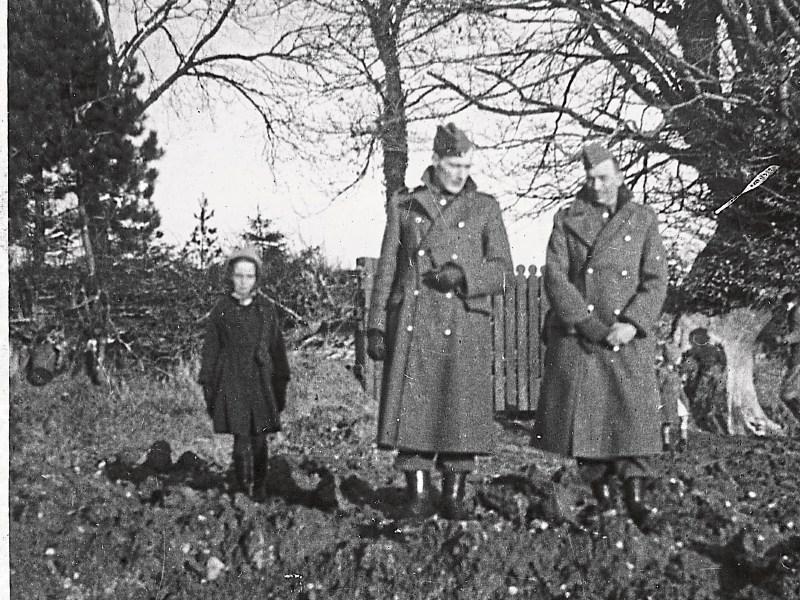 It was a New Year’s gift as unwelcome as it was unexpected. In the early hours of 2nd January 1941 as the people of Newbridge slept under the comfort blanket of Irish neutrality a Nazi plane droned overhead and unleashed a torrent of bombs to the west of the town. High explosive projectiles plunged earthwards scouring craters in the ground on the edge of the Curragh racecourse and in the fields of Ballymany Stud. A further stick of incendiary bombs lit up the night sky as they fell to the south of the town on to the fields of the Cox farm at Walshestown setting a valuable stock of hay and straw on fire.

This New Year’s present from Hitler’s air force could have been a lot worse. There was no injury to man or animal in the rural environs of Newbridge where the bombs had impacted. Had the bombs fallen a mile to the east the town could have been all but annihilated. The tragedy of the North Strand bombing in Dublin later that year when a bomb dropped on the north-side of the city killed more than 30, injured scores, and destroyed hundreds of houses, would show the devastation which high explosives could bring to urban streetscapes.

As it was there was tragedy in a neighbouring county on that January night. All over Leinster errant German bombers had dropped their deathly payloads at random over the countryside. One stick of bombs straddled a farmhouse on the snowclad slopes of the Blackstairs mountains in Co Carlow.

Three female members of the Shannon family – sisters Mary Ellen and Bridget and their sixteen-year-old niece Kathleen – were killed instantly.

Although less lethal the Newbridge incident caused much local drama. The Leinster Leader’s Curragh correspondent reported that: “about 6.45 on Thursday morning an unidentified aeroplane approached the Curragh from a north-easterly direction and dropped incendiary bombs at Walshestown, Newbridge, one and a half miles from the Camp.”

The report added that one of the incendiaries had triggered a fire in a large stack of hay and straw in the haggard adjoining the farm house of Mr James Cox.

The Army fire brigade from the Camp was summoned and arrived quickly at the scene. It succeeded in confining the inferno to the haggard but over a hundred tons of hay and straw were destroyed.

The private fire brigade from the Irish Ropes factory in Newbridge and the town’s Air Raid Precautions fire-fighting service also responded to the bombing.

Witnesses said that the plane approached from “the Naas direction” and some said they heard small explosions followed immediately by flashes. Mr Joseph Dunne, an employee of Mr Cox, was quoted as saying that the falling fire bombs resembled “shooting stars.” The incendiaries– of a type which had started terrible fires in the London Blitz – scattered all over Walshestown. Some fell adjacent to the home of Mr Patrick Sheridan but did no damage.

Of potentially more serious consequence were the eight high explosive bombs which dropped in the Ballymany area. Three fell on the Curragh lands between the Racecourse and Ballymany Cross gouging out craters at least forty feet wide. Five more fell on the lands of the Aga Khan’s Stud at Ballymany where incendiaries also impacted.

Gardaí from Newbridge and members of the Local Security Force combed the district during the Thursday for any further traces of bomb impact. The damage was confined to the severing of a water pipeline at Ballymany Stud and the scouring of the deep craters in the pastures of the stud and the adjacent Curragh plain.

But the searchers made a startling discovery. They found that one of the bombs had not detonated and it had embedded itself six feet deep in the Ballymany soil just yards from the house occupied by Mr James Hayde, steward and stud groom to the Aga Khan.

As Thursday wore on the national press sought reports from the site and in the Irish Independent of the Friday morning a column headed “Droichead Nua – Fire Bombs dropped” by an Irish Independent Special Representative reported that “A cordon was thrown around the unexploded bomb, and military experts began digging it out in order to render it ineffective.”

Mr Oliver McCrossan, well-known photographer, told this writer that he remembered seeing the activity as the bomb was made safe. He lived with his mother and family in the Standhouse at the Curragh. Incredibly his household was not woken by the plane or the bombs. But as the daylight came up he could see military vehicles converging on the bomb sites. Although just four years of age he insisted in accompanying his brother Ray to the site of one of the impacts. He recalls: “There were people coming from all over to see the crater.”

The skill and bravery of the Irish Army bomb disposal officers was impressive – approaching a bomb laden with high explosive, and with German fusing mechanisms that they would not have had the opportunity to practice on, must have required nerves of steel. As they worked on the bomb they made a discovery which would have international ramifications in the tense relationships between neutral Ireland and one of the warring parties – the bomb casing carried inscriptions which appeared to be German markings. Although there had been a handful of bombing incidents over the winter of 1940/41 there had been no objective proof of the source of the bombs. The Government of Eamon de Valera, treading the tightrope of neutrality, was loath to attribute blame until forensic proof was found. Now there was literally a cast-iron guarantee of attribution – the markings of the unexploded bomb at Ballymany were found to be in the German language.

However any speculation that the German crew could have been seeking out the military installations at the Curragh Camp was quickly discounted. The random distribution of bombings over the country in the previous hours with weapons falling in counties Dublin, Wicklow, Carlow and Meath, suggested that they were the work of panicking German pilots – most likely having abandoned their attack flight paths to Belfast – lightening their loads as they cut and ran for their home airfields in northern France. Their decision to unleash their bombs randomly over Ireland brought home to many that damaging sparks from the conflagration of world war burning up English and European cities could land on otherwise tranquil Irish communities.

As Oliver McCrossan recalls: “It made the war seem very real to us.”

LOOKING BACK WITH LIAM KENNY: Series no: 466