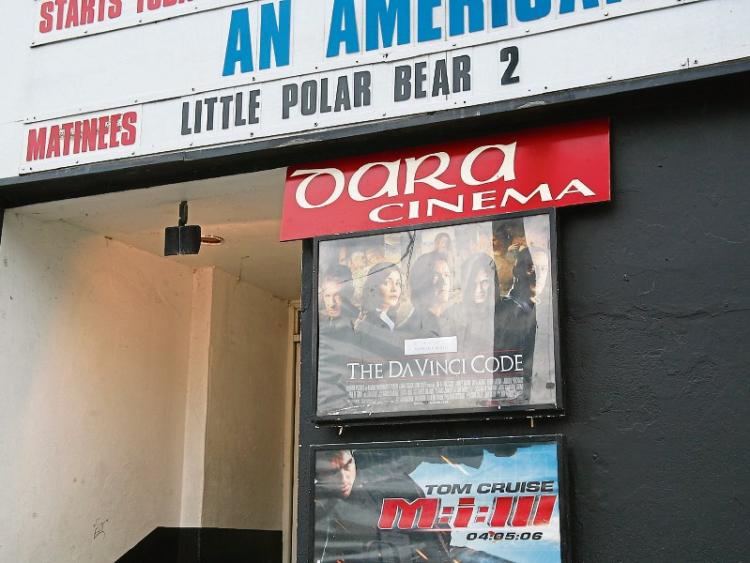 The Dara, the original Naas cinema

Late last year, when I heard Paddy Melia passed away I started to think about the old Dara Cinemas in Naas.

I read in the Leinster Leader then that Paddy was heavily involved in the Kildare Arts scene but to me he was the man who brought all the big movies to Main Street.

Growing up on a diet of RTE 1 and RTE 2 meant we were short high-quality televised entertainment and so a day in the cinema was a serious fill up.

We’d get down early and queue for the best seats before racing up the steps two at a time in pursuit of the back row after Paddy had turned the key.

The experience was sometimes other worldly, until Paddy or one of his staff came down, shone the torch in your face and told to you “to take your feet off the seats”.

It was 50 pence in! 50 pence to see Indiana Jones hurtling down a mineshaft in The Temple of Doom, or Paul Hogan scare a couple of New York muggers with a big knife in Crocodile Dundee, or Pete Venkman zapping Slimer in Ghostbusters, far from the Hollywood hills, beside a 1980s Kildare car park.

You get the idea.

Before the trailers it was just as surreal to see local hotels advertise weddings to a backdrop of cheesy music.

This on a screen later filled by the whip-cracking Harrison Ford.

Smuggling was an art form too and bringing in your own food and drink represented a serious violation with the cinema shop stocked heavy with Rocket ice pops. And after the credits rolled, Paddy Melia would be stood at the exit, nodding goodbyes while gauging reaction to Hollywood’s latest local installment.

Dara One was more than a cinema too. It was a platform for movies, sure, but the dimly lit theatre hosted countless coming of age moments.

I remember a lit cigar being passed up and down the back row during the matinee of Teen Wolf 2 in 1987. A Half Corona I think.

And there was huge symbolism in graduating from the matinee to the 8.15pm show.

I got knocked back for Rambo First Blood II before being brought to Soul Man in 1986. It was terrible, but I remember it vividly for it being my first 8.15 show and that bought some street cred on Monday at St Corban’s school.

The next leap was more difficult again – getting into the late late showing at 11.15pm.

No one in Kildare, or even Ireland, needed ID then so gaining access to shows rated Certificate 15 or higher brought the rehearsal of an older date of birth. Only you didn’t really need to remember because persuasion could appease Paddy’s authority, sometimes!

There must have been countless first dates in there and I only enjoyed one with Jacqui Lacey from Thurles in 2003. That was late in the life of the Dara Cinemas.

It was quiet that night and I knew it would be, because the movie was The Life of David Gale with Kevin Spacey, which was actually pretty decent as it turned out.

But it’s the big nights that stand out now and the sense of occasion that accompanied the arrival of blockbusters like Terminator 2 and Jurassic Park, the Commitments and Braveheart, to name just a few.

They were all great cinematic experiences, skillfully and effortlessly pulled off by Paddy and his staff.

In between, there were plenty of subtle and classy touches, like the day Paddy played The Karate Kid 1 and 2 back to back for the Sunday matinee, or his total embrace of the Commitments when he ran it as the headline movie for months and months as other new releases came and went.

I’ve been thinking this week about late local institutions and that I could never drive or walk by the Dara Cinema without looking up at the big black letters to see what was on or what was ‘Coming soon’. Anything that makes you do something over and over again surely qualifies.

We chose against the screens in Liffey Valley and drove in from Two Mile House, seven or eight strong, to fill the row from end-to-end.

It was a great night but we knew before the end that the credits on the story of the Dara were already rolling. Paddy Melia’s passing really brought the curtain down.