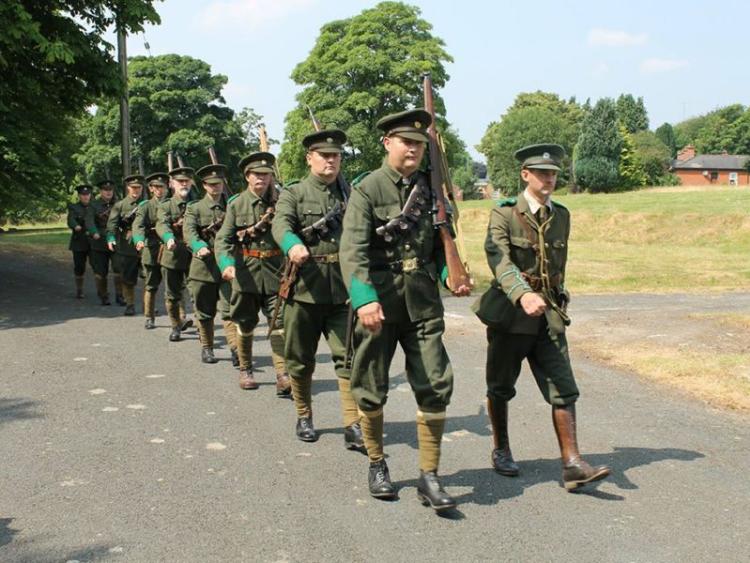 Monasterevin will 'rise' this Saturday, March 26, with a reading of the Proclamation, parade and re-enactments

This weekend sees the national 1916 commemoration ceremonies reach a peak – but there's still plenty to do in Kildare over the next few months to remember the events of 100 years ago.

Kildare County Council’s Decade of Commemoration Committee invites members of the public to join in its 2016 programme.

Full details of Kildare’s 2016 programme can be found on www.kildare2016.ie.

The Road to Rebellion

Philip Scott sings the songs of the Rising; with readings by Liam Quinlivan. Special guests, Sophie O’Carroll (soprano) and Donal Hennessy (pianist). Tickets for the concerts are free of charge, but must be booked in advance at www.riverbank.ie.

Discovered by chance inside a large metal container by family member Robert Doyle from Athgarvan, while clearing out an attic, the O’Modhráin family’s documents and personal effects displayed in this exhibition give a unique insight into Irish nationalism at a local level. The exhibition will travel around the library network until the end of 2016.

The exhibition, which launched at the Riverbank Arts Centre, will tour the county as follows:

The event includes a reading of the Proclamation at the Fr. Edward Prendergast monument, a parade and re-enactments.

Conquered Not We Were

A site specific play written and directed by Martina Reilly in association with An Nuadha Players, Maynooth, to honour the men of Maynooth who walked to Dublin on Easter Monday to take part in the Rising.

The Making of Her-story

Tickets can be purchased at www.moattheatre.com.

Meet the feisty, indomitable women of 1916. Six talented actors present fascinating stories against the backdrop of the Easter Rising. Devised and directed by Anne Mekitarian and Bredha Sexton.

The Leinster Printmaking Studio, Clane, with support from Kildare County Council Library and Arts Services is undertaking a year long programme of exhibitions and workshops to create awareness of little known events or incidents during or around the time of the Easter Rising in 1916.

Experience everyday life in Athy as you step back in time to the year 1916. Interact with Irish Volunteers, R.I.C. men and the people of the period. There will be vintage cars, high nellies and games on the Square. Visit the exhibition ‘Athy in 1916’ in the Museum, including the ‘Big House Scene.’

Take a guided town walk. There will be a special appearance by the replica Sliabh na mBan, arguably Ireland’s most famous car and much more.

This event will take place in the Athy Heritage Centre Museum and Emily Square. All free entry.

A play devised by Mario Corrigan and James Durney in conjunction with director Lianne O’Shea, to focus young minds to interpret the Easter Rising, war, death and destruction through the eyes of the participants – rebel, soldier and civilian.

The audience become jurors in an imagined trial of General Sir John Maxwell and Pádraig Pearse, President of the newly proclaimed Provisional Government of the Irish Republic.

The Flagship event of the centenary year in Maynooth is the annual wreath laying ceremony. This ceremony takes place on Easter Monday (March 28) at 12 noon.

The ceremony includes a reading of the proclamation, a blessing and laying of the wreath, raising of the national flag, The Last Post and the National Anthem. It is a fitting way to remember the ‘Maynooth 15’ 100 years on.

Following the ceremony a street festival will take place including bouncing castles, military vehicles display and face painting. A battle display will also take place in the harbour field. Throughout the day entertainment on the square will include traditional Irish music and dancing, Maynooth band and local singer Barry Smith

This is a free public event.

The day will commence with a guided walking tour of Maynooth that will explain Maynooth’s role before, during and after the 1916 Rising. The tour will finish at the Scouts’ Den where there will be a display of memorabilia. The attendees will then proceed to re-enact the walk to Dublin along the Royal Canal undertaken by the Maynooth 15. A barge will accompany the group to provide refreshments and breaks to facilitate those who are unable to make the full walk on foot. On arrival at the G.P.O. at circa 6pm, a wreath will be laid and the Proclamation, previously delivered by Padraig Pearse, will be read.

The aim of 1916 Sackville Street Art Project (re-named O’Connell Street in 1924) is to hold an exhibition of houses in any 3D art form commemorating the lives of the ordinary civilians that were killed in the 1916 Easter Rising. 485 people were killed in the Easter Rising 1916, 262 of these were civilians. The objective of the Project is to tell their story by constructing 262 art houses representing each of the civilians killed.

The story of Captain Henry de Courcy Wheeler of Robertstown, who brought the surrender document to many of the 1916 Dublin garrisons will be retold during this community event.

At various locations around Naas Town.

Artist Paul Woods will mount several large-scale artworks in locations in the town; complemented with an audio-guide this trail will generate dialogue about the Kildare men and women involved in 1916.

The Songs of the Rising

We want your vote, let us know the song you most identify with about 1916. Kildare County Council’s Decade of Commemoration Committee in association with KFM Radio has selected 16 songs to vote on, or add your own favourite.

Songs range from God Save Ireland to The Foggy Dew. Go online and vote www.kildare2016.ie/songs-of-the-1916-rising.