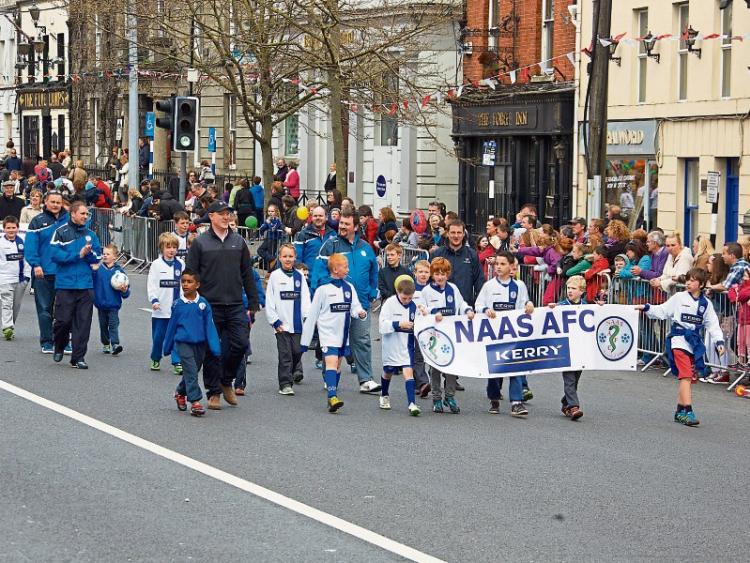 There will a distinctly international flavour to the Easter Parade, which takes take place in Naas this weekend.

The Sunday parade is the traditional highlight of the Easter weekend in the town.

Last year’s event did not take place because of the death of Cllr Willie Callaghan the previous December.

The Fianna Fail councillor had been the parade organiser as had his father Bill before him.

This year’s event is being organised by Deborah Callaghan, Willie’s daughter, who was coopted on to Kildare County Council to replace him.

Unsurprisingly this year’s parade theme is the 1916 Rising and there are a total of 19 prizes up for grabs.

The visitors will be the Mayor of Dillingen (Germany) and Mayor of St David’s (Wales) and there will be a delegation from Omaha, Nebraska. Naas is twinned with all three towns. The event is being sponsored by three local commercial interests JF Dunne Insurances, Dennison Trailers and McDonald’s.

“We believe this will be the best parade we’ve done in years and we hope people will take this opportunity to celebrate one of Naas town’s biggest annual events. Please show your support for all of the participants who have gone to a lot of effort by coming out on the streets of Naas and cheering while you enjoy the event,” said Ms Callaghan.

The parade will start from the Blessington Road at 2.45pm and participants are requested to gather from 1.15pm to allow the judges time to assess all the entries.

Afro-Eire, a group which promotes West African dance and music will take part for the first time alongside the St Conleth’s ONE Pipe Band and the Mustn’t Du Habba Band from Dillingen.

There will be a special prize for the participant judgd to have best adopted the theme to their entry.

Parents are asked to be extra vigilant to ensure that children stay behind the safety barriers and follow the instructions of the gardai and the stewards.