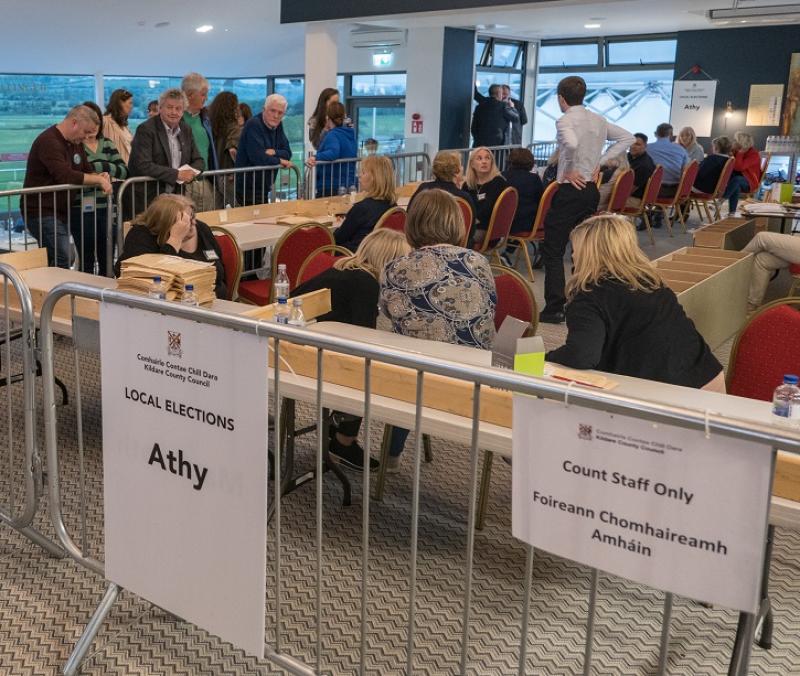 The Athy count at the Hunt Stand, Punchestown

1PM: Four more county councillors were elected to Kildare County Council this morning, on the second day of the 2019 Local Election count at Punchestown.

Monasterevin man Kevin Duffy (FG) was elected on the fourth count in Kildare LEA, and his party colleague, returning councillor Mark Stafford, was over the line on the fifth. They join the two Fianna Fáil women elected yesterday, Suzanne Doyle and newcomer Anne Connolly, while the fifth seat is a fight between SF's Patricia Ryan and Independent Declan Crowe.

The Athy count has finished, with Vera Louise Behan and Brian Dooley of Fianna Fáil deemed elected this morning to join Labour's Mark Wall and Aoife Breslin, and Fine Gael's Ivan Keatley in the representation of this five-seater. Long-standing councillor Tommy Redmond, of Sinn Féin, has lost his seat.

A full recount is ongoing in the Celbridge LEA, after just 10 votes separated two vyeing for the last seat yesterday - Labour's Ciara Galvin, who was elected, and outgoing Independent Brendan Young.

The Naas count is still ongoing, were only the Greens' Vincent P Martin was elected yesterday. Counts for Leixlip, Maynooth, Clane and Newbridge have yet to start.

Follow all today's action, plus candidate reaction and analysis on the Leinster Leader's Election Blog LIVE FROM PUNCHESTOWN.

The Celbridge recount is now over and the result stands. One of Ciara Galvin’s first preferences were found to be a spoil which means that the result stands with a reduced margin of nine, so the Labour woman takes the seat over sitting Independent Brendan Young.