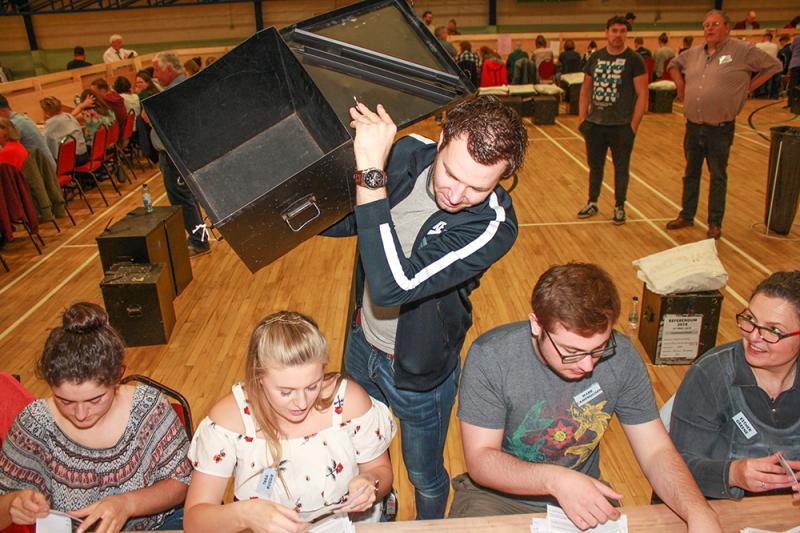 Fianna Fáil and Fine Gael look set to share most council seats while the Green Party has made a big impact in todays elections, especially in the European Parliament poll, according to the REDC exit poll for RTÉ and TG4.

The exit poll also reveals that 87% of voters are backing a yes vote in the divorce referendum change.

The two big parties each stand at 23% following the exit poll which surveyed 3,000 voters. Next up was Sinn Féin on 12% with Green Party coming in fourth at 9% of votes in the local elections.

Labour vote is stuck at 6% while up to 15% of voters are backing independents.

Support for the Greens is more notable in the European elections. In Dublin the Green Party's former TD Ciaran Cuffe looks set to top the poll with 23% of the vote.

Kildare voters cast their European votes in the four-seater Midlands North West. Sitting MEP Mairead McGuinness of Fine Gael is likely to top the poll on 25% support, and could bring in her FG running mate, ex-Rose of Tralee Maria Walsh, a first-time candidate, who is on 10%, along with sitting MEP Luke 'Ming' Flanagan. Matt Carthy of Sinn Féin is second with 15% and former outside shot Saoirse McHugh of the Greens polled strongly after her strong debating performance last week and is in third on 12%. Controversial ex-Presidential candidate Peter Casey is on 7% -  but Fianna Fáil are struggling according to the exit poll, with Brendan Smith and Anne Rabbitte on 6% and 3% support respectively. Dominic Hannigan of Labour and Fidelma Healy Eames (Ind) bring up the rear with 3% respectively (note, the poll has a margin of error of +/- 4%)

Counting of votes gets underway on Saturday morning.