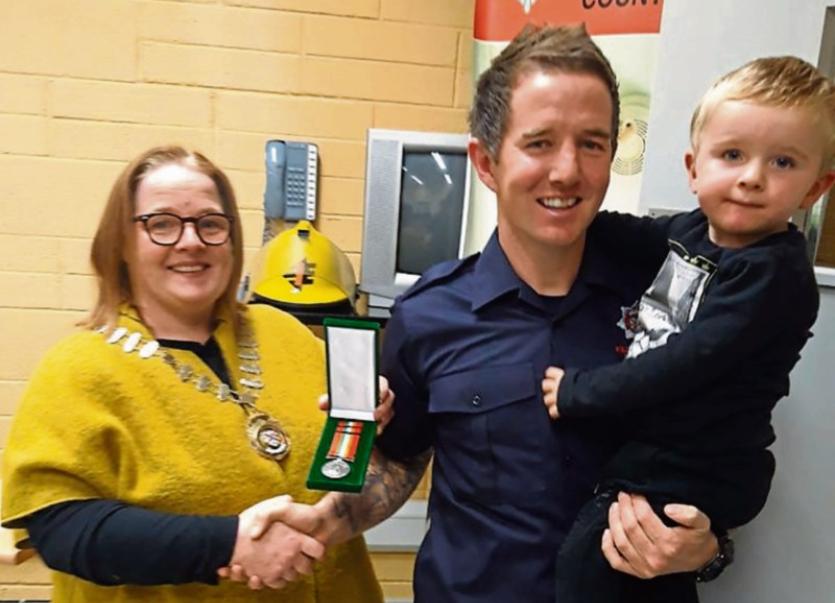 There was a great turnout at Athy Fire Station when Rory McCarthy, of the coach builders Sidhean Teo, based in Spiddal, Galway handed over this long-awaited new Class B fire engine which will replace the current 2002 registered vehicle located in the station.

The fire engine was funded by the Department of Housing, Planning and Local Government as part of the 2018-2020 Capital programme and was manufactured in Spiddal by Sidhean Teo. The vehicle represents a significant financial investment in the Fire Service in Athy with an all-in cost of €400,000.

According to KCC the station in Athy responded to 266 incidents last year and as the town develops and expands it is important that the Fire Service is capable of continuing to respond to the needs of the local community.

This new vehicle is one part of that response.

The Cathaoirleach also presented 1916 commemorative medals to all of the fire service staff in Athy that were working in the station in 2016.

These medals are currently being given out across the country and the crews in Monasterevin, Leixlip, Maynooth and Newbridge have already received their medals.

The purpose of this medal is to recognise the particular contribution that the Fire Service has made to the State since its foundation.

The evening has been described as a monumental ceremonial night in Athy station for both the Crew of KE13 and for the town of Athy.