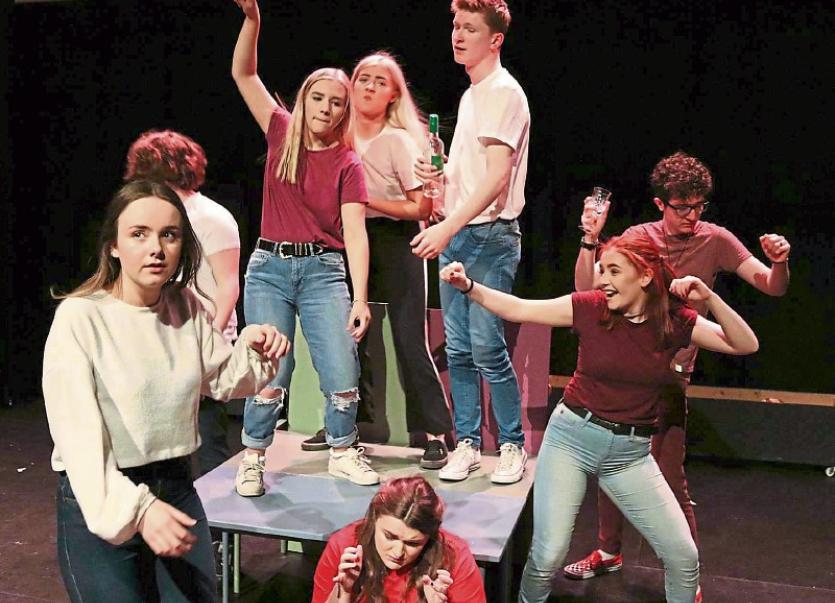 Members of the group on stage

Kildare Youth Theatre has been selected to stage a new play at the 2019 National Theatre Connections Festival, which takes place in the Dorfman Theatre from 25-29 June.

Kildare Youth Theatre from Newbridge, will perform The Small Hours, a new piece of writing by Katherine Soper at the 2019 Connections Festival on Thursday 27 June in the Dorfman Theatre, having first performed the play at Connections partner theatre Lyric Theatre, Belfast.

Kildare Youth Theatre has been running since 1996 in Newbridge, Ireland, where they create adventures in theatre with young people.  Since first staging a Connections play in 2003, they have staged 37 new plays from the Connections portfolio. They were immediately attracted to The Small Hours because of the complex relationships between the characters, the subtle and delicate text, and the meditation on time and transience.

Connections is the largest youth theatre festival in the UK which celebrates new writing for young people aged 13-19. Ten new plays by both established and emerging contemporary playwrights including Ben Bailey Smith, Lajaune Lincoln, Katherine Soper and Dawn King have been exclusively commissioned for young people to stage and perform at this year’s Festival.

Over 6,500 young people have taken part in Connections this year, with the ten plays being premiered by 273 youth theatre companies and schools across the UK. All the companies had the opportunity to transfer their production to one of 30 leading Partner Theatres across the UK, including Lyric Theatre in Belfast. Ten companies are selected to perform at the National Theatre between 25-29 June to represent the range of exciting work being produced across the UK. Young people are involved with all aspects of creating and staging the play and take on a variety of backstage and off-stage roles, from operating lights and sound to set and costume design and stage management.

Peter Hussey, leader of Kildare Youth Theatre said, “We feel very privileged to be taking part in Connections this year – it’s probably the best programme of its kind in the world, providing a stepping-stone for thousands of young people to engage in meaningful theatre-making while being very accessible, inclusive and supportive to all.”

ALSO: WATCH: A Kildare farewell to Game of Thrones